It was a Mass celebrating a major anniversary of the parish and I was right in the middle of the homily. It was also one of those exquisite moments when the message and the congregation connected to such a degree that you could hear a pin drop. I drew another breath to begin the conclusion, and that’s when the cell phone went off. It belonged to the little old lady sitting in the first pew, in the bench designed for those who have difficulty walking. I assumed she would turn it off, but instead she actually answered it, and in that charmingly loud voice of the hearing-impaired, she said, “Yes, I’m still in church!....I don’t know….He’s still talking!”

People who are trying desperately to choke back laughter make a very distinctive sound. On that fateful morning, it was exactly that sound I heard starting somewhere in the fourth pew. I heard it—and then actually watched it—work itself halfway through the church, until it finally exploded into an all-out guffaw. My moment in homiletic heaven was history. I watched people lending tissues to each other and wiping tears from their eyes as their chuckles were winding down, and I knew the homily was over. I mumbled some non sequitur about the parish and joy and the God of surprises and returned to my seat.

Being a Sunday preacher is a scary business. It starts long before you stand at the pulpit. My homiletics professor told us that it takes a whole week for a homily to “cook,” and mostly she was right. Really, it starts on a Monday morning, when I read the Scripture for the coming Sunday, along with any number of relevant commentaries. Then it all sits in the brain, on a back burner, slowly simmering. Throughout the week, I hope it will get some fresh seasoning from timely newspaper articles and things I’ve observed in and out of the parish. The goal is to make my words about the Scripture slide from the head into the heart.

By Friday, I’m hoping my simmering thoughts make their way down the arm and into the hand that commits the first draft to paper. In a good week, some idea sets me on fire and I rush to write it down. First drafts, though, are always too long. “Never speak longer than you are interesting!” the professor would tell us, as she scanned us over the top of her eyeglasses. “And none of you is really that interesting….”

That made an impression. I always tighten things up on Saturday morning. The next step is to reduce all of the written text to the barest of speaking notes in order to “allow room for the spontaneity of the Spirit, which will only happen if the original is well-crafted to begin with,” as the Professor Lady instructed. Finally, any rough edges are smoothed off with a couple of rounds of practicing out loud.

Some weeks, the heart aches to be kindled with a good idea or an interesting angle. Sometimes the best that can be done is to assemble a “Frankenstein homily” from bits and pieces of sermons written long ago. This approach always comes with a side order of humility, the realization that no one remembers anything you said three years ago, no matter how brilliant and life-changing they told you it was after Mass.

Eventually, you take a deep breath and bring it all to the pulpit. Some days, the only distractions are a few screeching children or a couple of text-messaging teenagers. Yet more and more, I encounter another phenomenon. I might be talking about, say, marriage, and suddenly I sense all the long-married couples carefully training their attention on my words. Or, I might mention something about Aquinas and realize that a medieval scholar is sitting in the third pew. I start describing some ancient Palestinian cultural practice in order to give some context to the Gospel, and then I remember that the electrician who’s a regular at the 9 a.m. Mass completed a rigorous Bible study course at the local college.

When I preach, I am increasingly conscious that the people who must listen to my homilies reflect a dramatic change in the relationship between the clergy and the laity; specifically, the laity is more educated than ever before in the ways of religion, theology, and Scripture. This presents an exciting challenge; it also introduces an honest and healthy dose of fear. Facing my parishioners from the pulpit, I realize that I am less of a “guru” and more of a companion. My decades as a priest have taught me that my parishioners, like those in any faith community, preach the gospel powerfully in many different ways themselves. All I really need to do when I preach is hold up a kind of mirror so that those in the pews can see how God is at work in all of our lives.

Who knows, given the theological sophistication of so many laymen and women, one day we might figure out a way to allow anyone who feels called to “cook up” a homily to stand in the Sunday pulpit. As far as I’m concerned, it would be good to share the fears, the joys, and the little old ladies who come with the job. 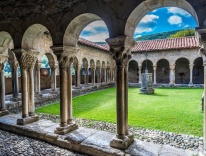