Is It Really A Wonderful Life?

George Bailey's Dark Side
By Patrick J. Deneen
From the Archives
Movies 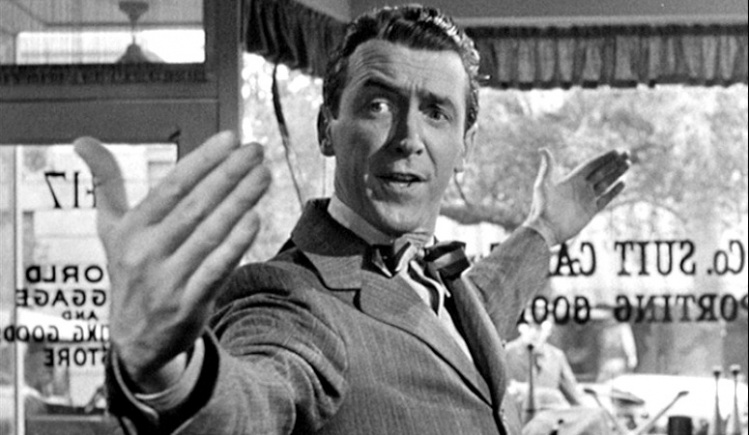 [This article originally appeared in the December 19, 1997, issue of Commonweal]

Thanks to countless television reruns each holiday season, It's a Wonderful Life has be­come a permanent feature of our Christmas celebration. Frank Capra's delightful film features Jimmy Stewart as George Bailey, an Everyman who saves his small town from an evil Scrooge. As it happens, George Bailey only grudg­ingly comes to realize the value of his own life by witnessing, thanks to the inter­ventions of an angel, what terrors might have occurred had he never lived.

Bailey very much represents all that is good and decent about the American dream. Above all, he is a family man beloved by his community. Yet, It's a Wonderful Life captures the dark side of America as well. No, it's not simply the Scrooge-like banker Mr. Potter. Rather, George Bailey himself—Bailey the op­timist, the adventurer, the builder, the man who craves nothing else but to get out of Bedford Falls and remake the world—exhibits a little-remarked-upon dark side. As we watch It's a Wonderful Life this year, I'd like to suggest that we pay more attention to what the vindi­cation of George Bailey's life actually entails. For Bailey, in fact, destroys the town that saves him in the end.

The movie's first scene pictures an idyl­lic Bedford Falls covered in freshly fall­en snow, people strolling on sidewalks, a few cars meandering, healthy store­fronts comfortably framing tree-lined streets. It is an America long dead: dis­placed first by Woolworth's, then K-Mart, then Wal-Mart; mercilessly restructured to serve the automobile; drained of life by uniform architecture, interstate high­ways, and the ever-expanding suburbs. We like this movie because it portrays Mr. Gower's drug store as a place to meet neighbors over an ice cream, not merely a place where one is treated as a faceless consumer buying an endless variety of pain-killers. We like this movie because, like "Cheers," Martini's bar is a place where everybody knows our name.

But young George Bailey hates this town. He wants to escape its limiting clutches, ideally to visit distant and ex­otic lands. As he grows up, his ambi­tions change: he wants "to build things, design new buildings, plan modern cities." The modern city of Bailey's dreams is contrasted to the confinements of Bedford Falls: Bailey's future is to be open, fast, glittering, kaleidoscopic. George craves "to shake off the dust of this crummy little town" to build "air­ fields, skyscrapers one hundred stories tall, bridges a mile long...."

Bailey embodies the energy and vi­sion of postwar America. Like the na­tion as a whole, Bailey is eager to up­root nature and to alter the landscape, to re-engineer life for mobility and swift­ness. Bailey's brave new world is un­encumbered by permanence and not confined to a merely human scale.

Our hero's dreams are famously thwarted by fate and accident: he ends up managing the family Building and Loan. Yet his grandiose designs are not forgotten. Rather, they are channeled into the only avenue available: Bailey remakes Bedford Falls. His motives are noble: by creating "Bailey Park," a mod­ern subdivision of single-family hous­es, he allows hundreds of families to es­cape the greedy and malignant clutches of Mr. Potter. But is Bailey's subdivision worthy of admiration in itself? Potter is evil, yes, but that does not necessarily make Bailey's actions laudable.

In truth, Bailey Park is little more than an antiseptic suburban sprawl, espe­cially when compared to the organic unity of Bedford Falls. Bedford Falls has an intimate town center, and blocks of houses with front porches where peo­ple sit and greet their neighbors. It is a town with a deep sense of place and his­tory. When George's car crashes into a tree, the owner berates him: "My great­ grandfather planted this tree." He is the fourth generation to live in his house.

In Bailey Park all the trees have been plowed under to make room for wide streets, large yards, and garages. In con­trast to Bedford Falls, the subdivision is empty, almost devoid of human pres­ence. Residents are presumably hidden behind the unwelcoming doors of their modern houses or relaxing on their back yard patios. There are no front porches in Bailey Park—life is led in private, not in the intermediate public spaces that link the street to the home. One doubts that anyone will live in these houses for four generations, much less one.

Toward the end of the film we learn something more sinister. Bailey Park, it is revealed during George's time travels with the angel Clarence, has been built atop the old town cemetery. Not only does George raze trees and transform landscapes, but he commits an unspeak­ able sacrilege: He obliterates a sacred sym­bol of our connection with the past. Bai­ley's well-intentioned vision of a modern America eliminates our links with our forebears, covers up the evidence of death, supplies us with private retreats of social isolation, and all at the expense of a liv­ing, intimate community.

We tend not to notice these aspects of It's a Wonderful Life, partly because Bai­ley is a decent man, and we're always rooting for him against Mr. Potter. More­over, we don't notice George's animus toward the town that sustained him, I think, because we find nothing aberrant about his vision: after all, it is largely our own vision. However, George Bai­ley's story should serve not only as a Christmas treat, but also as a reminder of what modern prosperity seemingly insists on depriving us.

Tags
From the Archives
Movies