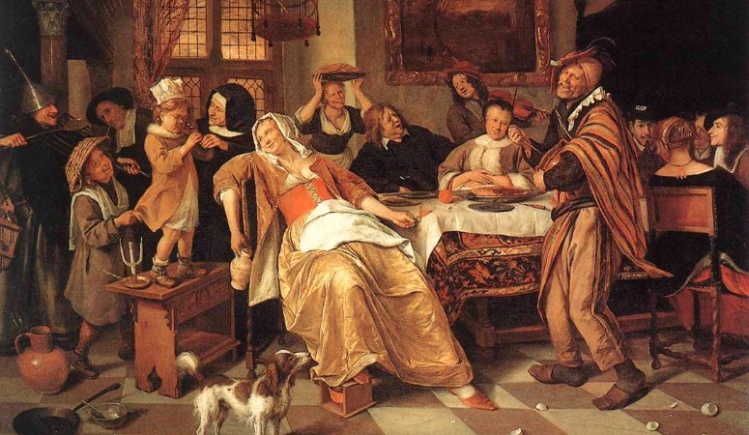 [This piece originally appeared in the December 19, 1997, issue of Commonweal]

We have lost the art of feasting. This is a little sad at Christmas time. We cannot feast, because we do not fast.

I am not, here, bemoaning the passing of the old "disciplines" of meatless Fridays, the from-midnight ab­stention before Communion, or the rigors of Lent. (No one has taken these away from us anyway; anyone who wants to is entirely free to fast, and many do.) I am talking about a larger social rhythm.

I have never read any comment on the delicate courtesy of the church which imposed fasting as a gift upon her chil­dren at exactly the time of year when they would have been hungry anyway. Lent fills in the long season of the year when food in northern agricultural communities was most scarce and least attractive. In the autumn you killed any animals that you did not plan to breed next year—by the second half of the winter, you have either eaten them up or what re­mains is rancid, weevily, and smoked dry. Your potato heap and your grain store are running low; the rats have been making free with what there is; and you must keep some­ thing back for seed. For the church to say, "Now, now is the time we will fast; this lean period is given to us for grace. And the rich, whose cupboards are full, will not be allowed to taunt the poor with their pink cheeks and round bellies," is not about body-hatred, it's about making the best we can of what we've got. It is about good manners.

I only recently learned that hens—free-range ones—radi­cally reduce or even cease laying when the weather gets cold. I have read many elaborate allegorical explanations of why eggs became especially associated with Easter. Perhaps it was because they were available; that, simply in and of itself, was something to celebrate. Feast on eggs after fasting from them; paint them bright colors, hand them lavishly to your chil­dren—look, we have eggs to eat! Feasting is about excess after hunger.

We of the developed nations live in a society in which si­lence, or quietness, has become the central symbol of joy, of peace itself. Such a notion would have been incomprehen­sible, for example, to the Vikings. Their idea of heaven, even after they had become Christian, was of a very noisy and garish place. Peace did not mean quietness, it meant huge drunken hugs instead of huge drunken fights; it meant feel­ing safe enough to hang up your sword knowing you were going to be among friends. Because out there, waiting at the hall door, were miles and miles and miles of dark, danger­ous, and sinisterly quiet forest, miles and miles of salt sea where a ship could founder in the silent night and the foam spray would carry no message home. We yearn for quiet be­ cause what we experience is a continuity of din. True feast­ing is about noisy sociability.

Before electricity, it was dark most of the time, especially in the north. Candles were expensive—a candle-lit dinner was not about romantic intimacy, but rare moments of comfort and companionship. Now our cities are so full of light that it dims the stars themselves and we have a new problem—light pollution. Any dark evening or dull morning that I come into my house, there at my finger tip is a bright light, clearer than the sun. Feasting is about brightness, a light in the dark. Now l buy a dimmer switch to reduce the glare.

And just as we are saturated with light, so are we with warmth. My house is warm even when I'm not in it. This is new. When I was a child everyone who could afford to dif­ferentiated between winter and summer underwear: We wore woolly pants and vest from November to April. My children have never worn woolen underwear. Warmth has become so normal that we find sweat distasteful. We spend millions of dollars a year not celebrating the fact that we are warm enough, but disguising it. But feasting is about warmth—about huge fires and hearty dancing.

Cleanliness is not a delight for us either. Dressing-up holds little charm; most of my peers dress down when we relax and socialize. I wash my hair about four times a week. I change my underwear daily. It is so easy to keep clean; getting clean is more of a routine than a celebration. Feasting is about putting on your finery, which takes so much time and effort that you cannot do it often.

We are bombarded not just with heat and light and food, but with people. I can talk to my friends, however distant, whenever I want to. There is rarely a day when I do not en­counter a stranger. I want protection from a sense of invasion more often than I think how exciting it would be to see someone new. Feasting is about the joy of seeing old friends, and the excitement of meeting new people.

Such comforts are not luxuries, they are the common ex­perience of contemporary Western humanity. Life is no longer rhythmical, a coming and a going, as it was. Until this centu­ry it was not just the very poor who might well dread a long winter, it was everyone. No one had instant light, warmth, travel, food; no one had a deep freeze, a shop open late into the night, access to music and news at the press of a button.

On the whole, all this is a good thing—I have no senti­mental hankerings. But it does mean that I never fast and so I don't know how to feast: and at Christmas time I sense something missing. Feasting is about excess, extravagance, abundance. Feasting is public, celebratory, and inclusive. (It is also necessarily hard work—many of us buy plastic Christ­mas trees because we are too idle to vacuum up a few fallen pine needles.)

We have come to think it is rather vulgar to eat until we are bloated; to give gifts so extravagant that they put us into debt; to stuff children with candy until they are sick; to get roaring drunk, wear silly hats, and sing loud songs whose words we cannot quite remember. And because we cannot do it ourselves, we tend to despise feasting itself. I have some friends who keep to the tradition of placing a tapped beer bar­rel in their front garden over Christmastide, free for all. Last year the local clergy came and asked them to stop because people swilling beer upset those leaving midnight Mass.

Instead of feasting we go in for "spirituality." Instead of extravagance, we talk about being "less materialistic" at Christmas for heaven's sake. The wise men brought gold, frankincense, and myrrh; much is made of the theological and spiritual symbolism of these gifts, little of the crude fact that they are very expensive. God does not seem to mind ma­terialism in a good cause.

But God, apparently, loves feasting. Nothing secretive or peaceful about it. A brash new star, exotic foreigners, ec­static shepherds, choirs of angels—not just a quiet messen­ger, but hosts of them, pouring through the night sky singing "Glory." God chose to celebrate this feast "just at the worst time of the year," to be a light in the darkness, to comfort us on our lonely road, to prove over and over again that the things of the world are good, that fun is an ethical concept. Perhaps this is what is meant by "blessed are the poor"—they know how to feast.

I wish I were able to feast with this extravagant host. I am appalled by my pusillanimous responses: by the minginess of my imagination. I tend to criticize the menu ("virgin birth­ so out of date") and carp at the behavior of less refined guests ("oh, not 'Hark-the Herald' again"). I wear jeans not my wed­ding garment, and I want the children to "calm down" and not  wake up too early in the morning.

I'm not sure that I can wear a paper hat and stop counting the cents, but that is my loss. At least I can try.

Come, let us keep the feast.

Tags
From the Archives
Poverty
Secularism and Modernity
Spirituality
Theology

Sara Maitland is a British writer and feminist. Her most recent book, Gossip from the Forest (2012), explores the idea that fairy stories come out of forests. You can find here full bibliography on her website.