With every monthly issue, we provide a free discussion guide to use for one or more of our feature articles to facilitate conversations in your classroom, parish, reading group, or Commonweal Local Community.  In this month's guide, we draw upon the themes raised by several writers on what American life will look like after Dobbs.

1. Is our political environment hostile to what Meghan Sullivan describes as “a vulnerability to the significance of someone else”? How can Catholics wield their votes to stand with the most vulnerable when, as Sullivan writes, “[n]ational political parties have built strategies that depend on abortion remaining an issue that persistently divides voters”?

2. Do you find the parallels David Cloutier draws between abolitionists and opponents of abortion convincing? Does it grant the pro-life movement more authority or legitimacy to think in these terms? Is there a risk of alienating on-the-fence Americans with too grandiose a moral imperative?

3. What do you make of Cathleen Kaveny’s reference to Justice Robert Jackson’s words, “we can say that the Supreme Court is not final because it is right; it is right because it is final”? Do you agree with arguments about the overturning of Dobbs that condemn it for going against precedent? How might Catholics think about their own firmly held convictions in light of a democracy that aims to reflect the dynamic will of the people?

4. George Scialabba points out that Republicans have moved to ban abortion without support from the majority of Americans. How can Catholics advocate for their position that life issues are a “seamless garment” if the overwhelming majority of Americans disagree? Does a concern as pressing as life need to receive the support of a majority of Americans in order for it to be legitimate? Should pro-life activists put more effort into changing more Americans’ opinion on abortion rather than supporting legal bans?

5. What do you make of Lisa Fullam’s point that more Catholics have abortions than members of other religious groups? Does it change how you think about the issue? How can we “take biology seriously” in the debate about when a fetus should be considered a person?

6. How does the history of Legge 194 influence your understanding of the possibilities of abortion regulation in the United States? Does it seem more appealing or more legitimate for the legality of abortion to be decided by referendum instead of in the judicial system?

7. What do you make of the fact that many of Tushnet’s clients feel “a moral responsibility to attain financial stability”? Does such a moral imperative exist? Does having a baby change that answer? How can Catholics contribute to a culture in which women feel comfortable having children before establishing themselves professionally but without limiting them to domestic roles?

Timmy Facciola is a reporter based in Sleepy Hollow, New York. 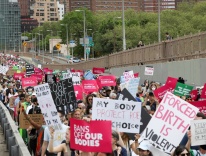