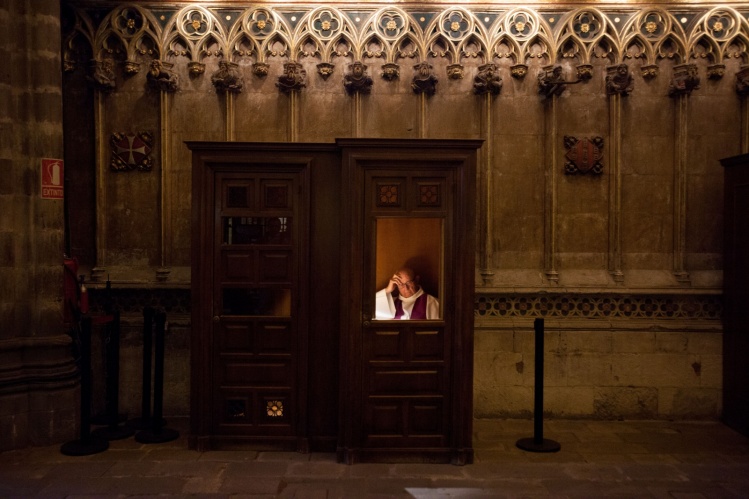 A priest waits for a parishioner to come to confession in a Barcelona cathedral (Jordi Salas / Alamy Stock Photo).

“Conscience” has a suggestive but also enigmatic etymology. It is “knowledge with”—but with whom? One answer is just: with ourselves. In conscience, we know inwardly, secretly, of wrongs we have done. But another answer is: with others. In conscience, knowledge that we share with others in our moral community, or perhaps with all moral agents, is brought to bear on our actions or prospective actions. A third answer is: with God. In conscience, we know God’s law, or God’s will for us in our circumstances, or, more ominously, God’s judgment of us as sinners. As that answer hints, just what we know in conscience is open to question—a second enigma suggested by its etymology. Maybe what we know in conscience is, more modestly, how an action or prospective action of ours squares with our values. In that case, a bad conscience is merely a personal sanction, rather than a signal of divine judgment.

Whatever our theory of conscience is, it ought to strike us as a peculiar phenomenon. My conscience “speaks” only to me, about what I have done or might do, and the same is true of yours. The relationship is intimate—private, or at least personal. And yet we are passive before conscience: we undergo its judgments; we suffer its rebukes. Though “internal” to us, conscience in some sense stands over us, making us feel guilty or ashamed, or demanding our obedience. It is an interesting fact in this regard that, while as children we learn from our elders just what circumstances ought to make us feel guilty or ashamed, the responses of guilt and shame are not themselves learned; they are innate to us as human beings. Conscience seems to have deep roots in our constitution.

Peter Cajka has written a fascinating book about conscience as it was invoked, interpreted, and contested by Catholics in the United States from the 1930s into the 1970s. Follow Your Conscience draws attention to two surprising findings: first, it was Catholic priests who “became the nation’s prime defenders” of the rights of conscience in the course of the twentieth century; second, “recurrent overlaps of sex and war” propelled conscience out of the manuals of moral theology and the confessional into public discourse. In Cajka’s telling, the prominent role of priests as defenders of conscience “flips on its head the pervasive story line about priest-ridden Catholics,” which endures in the aftermath of the clergy sexual-abuse scandal and coverup. Catholic priests “preached the gospel of conscience-following” and thereby helped “change the terms of American freedom.” The convergence of sex and war in the rise of conscience language forms a striking pattern. Opposition to saturation bombing and condom distribution to soldiers in World War II was followed by resistance to conscription during the Vietnam War, opposition to the magisterium’s teaching on contraception in Humanae vitae, and resistance to cooperation in the provision of abortion after Roe v. Wade.

Consider only the opening years of the 1970s. In a coincidence of history, Roe v. Wade, the termination of the draft, and what Cajka calls “the birth of the all-volunteer army” all came in the same year, 1973. Catholic resistance to conscription in the Vietnam War had failed: the Supreme Court rejected selective conscientious objection—objecting to participation in a particular war on the grounds of its injustice—in its 1971 Gillette and Negre decisions, though these decisions effectively became moot with the termination of the draft. By contrast, Catholic resistance to abortion quickly led, in 1973, to the Church Amendment, named after Sen. Frank Church, which prohibited the government from requiring individuals and hospitals to assist in the performance of abortion if doing so would violate religious beliefs or moral convictions. Sen. Church, who was both a Democrat and a practicing Catholic, also was an active opponent of the Vietnam War. Likewise in 1973, the Case-Church Amendment cut off further funding for fighting in Indochina without specific authorization from Congress. The Vietnam War was coming to an end; the culture war over abortion was just beginning.

Until the middle of the twentieth century, it was understood that the good Catholic wasn’t supposed to be a morally autonomous agent.
sharetweet

Cajka presents Thomas Aquinas’s theory of conscience at the crux of all this action. “Thomas Aquinas,” he writes, “placed a conceptual bomb in Catholic thought in the thirteenth century that went off in the second half of the twentieth century.” For Aquinas, conscience is not a special faculty or power, but instead a function of practical reason. In conscience, I apply the precepts of the natural law to me in my circumstances. So-called cases of conscience are occasions when it is difficult to know how some precept applies, or whether it does at all. For example, if I am starving, is it licit for me to steal the bread I need to survive? Would taking the bread in those circumstances even be “stealing”? Aquinas says it would not be. If I can reason my way to that conclusion, I can take the bread in good conscience, so to speak.

Until the middle of the twentieth century, however, it was understood that the good Catholic wasn’t supposed to be a morally autonomous agent. Instead, he or she was supposed to work through cases of conscience under the guidance of the Church. As Cajka notes, the practice of confession was supposed to bring the “law and conscience into the proper relationship between input (law) and output (correct action).” A Catholic with a badly formed conscience might be in error about, say, contraception. In that case, the Catholic was to “put away” his or her badly formed conscience and allow it to be conformed to the law as explicated by a priest in the confessional. “The system,” Cajka remarks, “flowed from top to bottom, from law to conscience.”

What upended this system? And why, in the late 1960s, did many, if not most, Catholics stop going to confession? In her book Catholics and Contraception, the historian Leslie Woodcock Tentler cites a long backdrop of anguish and resentment over the Church’s teaching on family limitation, an “increasingly permeable Catholic subculture,” “the period’s increasingly radical individualism,” a growing sense of moral autonomy among increasingly well-educated Catholic laypeople, and finally a perception that Humanae vitae amounted to a raw exercise in authority, without adequate rational support. Cajka adds that, in the middle of the twentieth century, priests discovered and promoted the emancipatory side of Aquinas’s theory of conscience. If, as Vatican II’s Gaudium et spes proclaimed in 1965, “conscience is the most secret core and sanctuary of man,” where “he is alone with God, Whose voice echoes in his depths,” then it seems an individual’s decisions made in conscience should not be countermanded, lest God’s will for that individual be overturned. Catholics thereby had both a right and an obligation to stand up both to the state and to the institutional Church.

Cajka’s history has one major flaw: his highlighting, time and again, the “medieval roots” of modern Catholic conscience language obscures what is distinctively modern about it. It is true that Aquinas holds that even a conscience in error ought to be heeded: one would do wrong to act against one’s conscience, even if it is wrong. But the reason for this is not that, as Cajka claims, even the erroneous conscience “generated an objectively true reality for the individual.” Conscience, at least on Aquinas’s theory, is not “the individual’s own truth creator.” Instead, one would do wrong to act against one’s conscience because, in doing so, one would be choosing to do what one takes to be wrong, and that can never be right—even if one is wrong about what is right or wrong. The classic literary example is Mark Twain’s Huck Finn. To simplify the story, let’s say that Huck believes it is wrong to help the runaway slave Jim escape down the Mississippi. Huck is wrong about that, but if Huck truly believes it is wrong for him to help Jim escape, then Huck would be wrong to help Jim escape, because Huck would thereby be choosing to do what he takes to be wrong. In scholastic terminology, there are two ways to evaluate Huck’s action: “formally” and “materially”—terminology that Cajka mentions but doesn’t explain. When we evaluate Huck’s action formally, we consider it under the description that he gave it: stealing property. That is wrong for Huck to choose to do. When we evaluate Huck’s action materially, we consider it under the description that someone who knows better would give it: liberating a human being. That is right to do, but until Huck is able to “put away” his erroneous conscience, he shouldn’t act against it.

In fact, Gaudium et spes’s account of conscience owes much more to John Henry Newman—whom Cajka does not cite—than to Aquinas. At least in some of his writings, Newman seems to treat conscience as a distinct faculty or power whereby we can apprehend what is right for us to do in our circumstances, so long as we can cut through the noise and corruptions of our culture (that is why, for Newman, listening to the Church is crucial). Ignatius of Loyola’s sixteenth-century method for the discernment of spirits also must figure in this genealogy. For Aquinas, we encounter God’s law in conscience. It is a modern innovation—though maybe one with Augustinian roots—that we can encounter God’s will for us amid our limitations and in our complex situations, to speak of conscience as Pope Francis does in Amoris laetitia. (Francis is a Jesuit, after all.)

Despite this flaw, Cajka’s book makes a persuasive case that Catholics, with priests leading the way, did indeed “change the terms of American freedom”—though not always for the best. As Cajka comments, his is not simply “a story of progress.” Conscience clauses now protect doctors, nurses, and Catholic hospitals from having to participate in abortions, but should provision also be made for employers, like Hobby Lobby, that object to coverage for contraception under health-insurance plans, or for bakers, florists, and the like who object to selling services for gay marriages? The proliferation in recent years of so-called conscience wars within our culture wars suggests a nation that is loath to seek middle ground. Invoking conscience can be a way of not having to engage one another. Similarly, as a Church, we don’t really talk about contraception any longer. Nowadays, few U.S. Catholics, including those who regularly attend Mass, agree that contraception is morally wrong or even a moral issue. Our consciences have spoken. But the bishops don’t really want to hear from laypeople, and laypeople don’t want to hear from them. “Conscience” has become a pact of silence.

Follow Your Conscience
The Catholic Church and the Spirit of the Sixties
Peter Cajka
University of Chicago Press
$45 | 232 pp.