Does the country still have a future?
By Joseph Amar
Middle East
War and Peace
Foreign Affairs 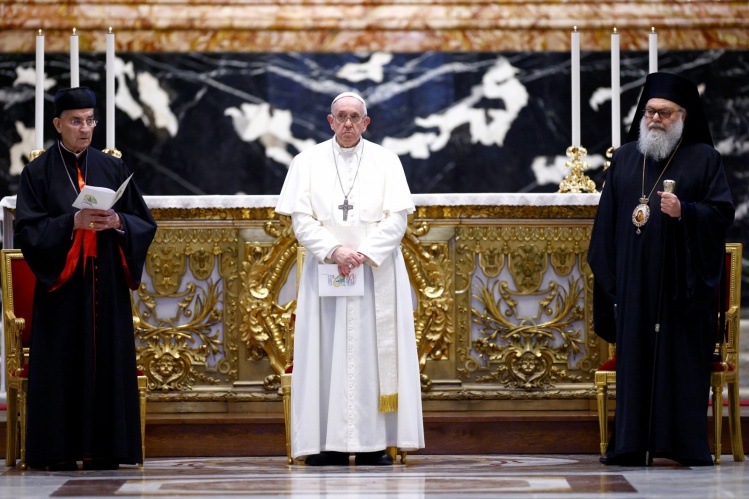 In early July, the leaders of Lebanon’s Catholic, Orthodox, and Evangelical churches met at the Vatican for what Pope Francis called “a day of reflection on the worrying situation in the country,” praying together “for the gift of peace and stability.” Prayer may be all that can save Lebanon at this point. The country is in the grip of a political and humanitarian crisis that grows worse by the day.

Lebanon has been without a functioning government for more than a year. The Cabinet resigned days after an explosion on August 4, 2020, which killed more than two hundred people, leveled the port of Beirut, and left much of the city in ruins. It was hoped that a July 15 meeting between Lebanese President Michel Aoun and former Prime Minister Saad Hariri would break the political deadlock. But Hariri emerged from the meeting—which lasted all of twenty minutes—to announce that attempts to form a new government had failed. By the end of the day, the Lebanese currency had plummeted to an all-time low of 20,000 lira to the dollar, wiping out savings and making the salaries of soldiers, police, and government workers worthless.

Even before this latest crisis, Lebanon was teetering. Today, it is in political and economic freefall. More than half of the once-robust entrepreneurial middle class has sunk into poverty. Electricity and water are strictly rationed; basic maintenance drugs for the treatment of diabetes, high blood pressure, and heart disease are either unavailable or unaffordable; hospitals are struggling to maintain essential services. The World Health Organization estimates the number of Lebanese experiencing food poverty to be more than 2 million out of a total population of roughly 6 million.

The Vatican-sponsored meeting came at the urging of Cardinal Beshara al-Ra’i, patriarch of the Maronite Church and Lebanon’s senior Catholic cleric, following a string of failed initiatives to broker an agreement between the country’s president and the prime minister. Maronite patriarchs traditionally wield significant moral authority, but orchestrating the meeting—and at the Vatican, no less—was no small feat. The assembled churchmen represent not only different theologies, but also different political visions for the country. Saving Lebanon means saving their constituencies and, by extension, their authority. They are pressing for political solutions to Lebanon’s problems while defending the sectarian framework of the government that contributed to them.

Patriarch al-Ra’i has proposed the creation of a neutral Lebanon on the pattern of Belgium or Switzerland. The proposal has merit, but it is unlikely to garner support—and for good reason. It is fiercely opposed by Hezbollah, the Iranian-backed terrorist organization that controls much of the country, including its volatile southern border with Israel. With a sophisticated telecommunications network and a fighting force that is bigger and better equipped than Lebanon’s army, Hezbollah constitutes a state within a state.

The World Health Organization estimates the number of Lebanese experiencing food poverty to be more than 2 million out of a total population of roughly 6 million.
sharetweet

The presence of large numbers of refugees in the country further complicates the situation. Lebanon already had more than three hundred thousand Palestinian refugees within its borders when refugees from the war in Syria began pouring into the country. They were welcomed at first, but as their number continued to grow, and as conditions in the country worsened, humanitarian aid earmarked for displaced Syrians was diverted to support soaring numbers of needy Lebanese. In mid-July, the United Nations High Commissioner for Refugees (UNHCR) estimated that there were more than 1.5 million Syrian refugees in Lebanon—this in a country smaller than Rhode Island. Patriarch al-Ra’i has accused the international community of making Lebanon carry the burden for the unrest that is sweeping throughout the Middle East.

Lebanon is facing the kind of deprivation it has not seen since the famine of 1918, when two-thirds of the mainly Christian population of what was then known as Mount Lebanon died of starvation, typhoid, and malaria. Today, Covid is spreading as vaccines are increasingly hard to come by.

The main objective of the Vatican meeting was to rally international support to address the humanitarian crisis unfolding in Lebanon. But neither this nor the effort to stem the mass exodus of Christians from the country—and from the Middle East generally—will be easy to achieve. Donor countries traditionally led by France and the United States are understandably cautious. Their fear, based on decades of bitter experience, is that desperately needed aid will end up in the pockets of Lebanon’s corrupt politicians. As jobs disappear and the value of the currency plummets, convincing what remains of the Christian population to remain in the country will be difficult.

Christians began fleeing Lebanon in great numbers during a fratricidal civil war that lasted from 1975 to 1990 and turned Muslims and Druze against Christians, Palestinians against Israelis, and Christians against other Christians. Since the U.S.-led invasion of Iraq in 2003, an additional 3 million Christians have fled the region. Countless others have died trying.

Lebanon has long been at the forefront of the Vatican’s efforts to stem the flight of Christians from the region. Pope John Paul II visited the country in 1997, followed by Pope Benedict XVI in 2012. Pope Francis, who included Lebanon and Syria in prayers he led during his trip to Iraq in March, has repeatedly expressed his desire to go to Lebanon “when conditions allow.” The likelihood of that happening any time soon is remote. Lebanon is mired in a fractious political system that is kept in place by entrenched ruling families who oppose even the suggestion of reform. The situation is further complicated by the role of religion in Lebanese politics.

Lebanon’s constitution apportions key government positions according to religious affiliation. The president must be a Maronite Catholic; the prime minister, a Sunni Muslim; and the speaker of parliament, a Shi’a Muslim. Four other communities—Antiochian Orthodox, Druze, Melkite Greek Catholics, and Armenians—have guaranteed cabinet posts alongside the Big Three. In spite of longstanding Muslim majorities, seats in parliament were divided on a six-to-five ratio of Christians to Muslims until 1990 when the ratio was changed to half-and-half. Politicians from across the spectrum exploit a broken system to instill fear of the other while amassing enormous personal fortunes.

Lebanon is facing a daunting future. In addition to its latest, largely self-inflicted problems, the country is the western front in a proxy war being waged by Iran and Saudi Arabia, a situation Pope Francis pointedly acknowledged at the end of the July meeting when he called upon outsiders to stop exploiting Lebanon and the Middle East for their own interests.

To date, appeals by Pope Francis and Lebanon’s religious leaders have fallen on deaf ears. On July 10, after ceremonially invoking Vatican efforts to bring the crisis to an end, the caretaker government announced with great fanfare that it had created a $556 million ration-card program for poor families. It was Lebanese politics as usual. The government offered no plan for how the program would work and no details about where the money for it would come from.

If Lebanon survives, it will not be because of corrupt, self-serving politicians who line their pockets at the expense of the country. It will be because of the courage and determination of the Lebanese—Christians and Muslims—who are fed up with a feudal political system. It was for them that the poet Kahlil Gibran wrote: “Your Lebanon is a political knot, a national dilemma, a conflict and a deception. My Lebanon is a place of beauty and dreams, of enchanted valleys and mountains.”