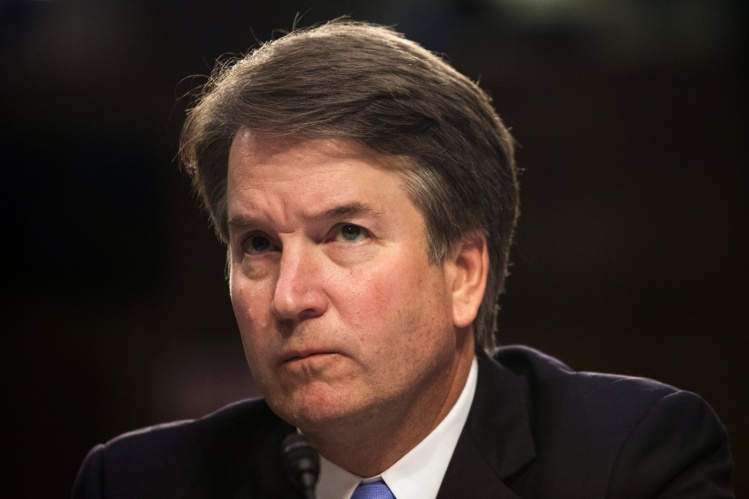 Brett Kavanaugh’s possibly imperiled nomination to the Supreme Court has me thinking about elite institutions, power, and privilege as the backdrop to explosive charges brought by Christine Blasey Ford—the Palo Alto University psychology professor who alleges that Kavanaugh, while a student at Georgetown Prep, locked her in a room during a party, held her down, covered her mouth, and attempted to rape her. Kavanaugh denies the charges. Sexual violence exists across religions and traditions, but it’s hard to ignore the fact that we’re now debating sexual assault claims against a prominent Catholic who was shaped in part by his experiences in an exclusive, Catholic prep-school culture at the same time we’re confronting an exclusive, patriarchal clerical culture that enabled generations of sexual predators.

I’m also the product of an all-male Catholic prep school. Our Jesuit mantra—“Men for Others,” the same one Kavanaugh learned—instilled an ethic of service, a spirituality of discernment, and a faith-based commitment to justice. But the values taught also existed within another context rarely acknowledged but ever present: a culture of entitlement where young men born into privilege walked with the jaunty confidence of those who knew instinctively that society was organized to defer to them. Even if we couldn’t explain the sociology of power, or spell out the specifics of why, for example, the criminal justice system and the prospects of professional opportunities would be far kinder to us than the black kids at a public school only miles but a world away, the order of things remained unquestioned. “That’s all right, that’s okay, you will work for us someday!” The shameful chant, spit like an epithet from my fellow classmates in the bleachers one fall afternoon after our football team suffered a bruising defeat from a predominantly black city high school, still echoes in my head decades later. I didn’t join in the appalling taunt, but I couldn’t completely separate myself from the institution and culture that generated those words. Ugliness was sometimes also rained down on visiting-team cheerleaders, body-shaming chants meant to demean and humiliate—all displays of male power.

I don’t recall these episodes to make a sweeping indictment of my school, or to claim the majority of the boys I grew up with acted that way, or that faculty condoned such behavior. We were taught to respect the human dignity of everyone. The vast majority of us aspired to that Christian imperative, and when we fell short, our families and school administrators were there to hold us accountable. The best of who I am was also shaped by the Jesuit values I learned and my experiences at the school. In remembering those days, I’m making a more universal point about privileged institutions, especially places where white men run the show, power is viewed as a birthright, wealth confers a sense of invincibility, and “the other”—women, African-Americans, LGBT people—either play minor supporting roles or more likely never make it on stage at all.

The Catholic prep-school culture that Kavanaugh frequently speaks about publicly as formative to his sense of identity and commitment to service is also shaped by a toxic masculinity and sense of entitlement.
sharetweet

“What happens at Georgetown Prep stays at Georgetown Prep,” Kavanaugh joked in a 2015 speech at the law school of Catholic University. The quip is expressive of a back-slapping, wink-of-the eye humor that acknowledges the chummy machismo and bonhomie: boys will be boys. “You know, teenage parties can be a little wild, a little crazy, but I don’t remember seeing much of that from the kids,” Catholic Charities CEO Msgr. John Enzler—who has known Kavanaugh for more than three decades—told Yahoo News in July. “These were not kids going out and getting drunk or using drugs. They were already living the values when they had very little adult supervision. At Georgetown Prep, you saw him [Kavanaugh] catch the spirit of their theme, which is ‘be a man for others.’”

Kavanaugh’s high-school classmate Mark Judge, who Ford claims was also in the room during the alleged sexual assault, fills in some gaps. His yearbook picture featured a quote from the British writer Noel Coward: “Certain women should be struck regularly, like gongs.” In his 2005 memoir God and Man at Georgetown Prep, Judge wrote that he published the school’s underground student newspaper his senior year, in one issue featuring a music teacher at a bachelor party “chugging a beer, surrounded by a group of us with raised mugs, sitting down while being entertained by the stripper.” Judge’s 1997 memoir Wasted references a “Bart O’Kavanaugh” character who throws up in his car and passes out drunk. None of this, of course, is evidence that Kavanaugh attempted to rape somebody. It is simply to acknowledge that the Catholic prep-school culture that Kavanaugh frequently speaks about publicly as formative to his sense of identity and commitment to service is also shaped by a toxic masculinity and sense of entitlement similar to what I saw at my high school.

The Washington Post featured an article this week about the tight-knit network of private and Catholic schools in Washington and its suburbs, including Georgetown Prep. The report included interviews with more than two dozen former students from those schools. From the Post:

They described parties with kegs of beer and bottles of liquor, grain punch, heavy drinking and drug use that took place almost every weekend and even on weeknights in private homes, parks, open fields and golf courses in Maryland and Washington. Until 1986, the drinking age in Washington was 18, and alcohol was easily accessible. Drugs, especially cocaine and quaaludes, were plentiful. Women who attended those parties remember sexually aggressive behavior by some of the male students that often bordered on assault and was routinely fueled by excessive drinking. “Most of the guys at these schools were really decent, nice guys, but there was a small minority that was popular and was out of control,” said a woman who attended Georgetown Visitation in the early 1980s and asked not to be identified. “I never got dragged into a bedroom, but that . . . happened to girls all the time.” Another woman who did not want to be identified said what she witnessed and what happened to her friends left her scarred three decades later.

“There were lots of teenage boys I knew at Prep and Gonzaga who were not sexually assaulting girls, but they were in an environment where that was seen as acceptable,” said a woman who attended Stone Ridge in the late 1980s and is a member of the Blessed Sacrament Roman Catholic parish in Washington, the same church Kavanaugh attends. “The story that Dr. Ford told, that doesn’t surprise me at all.” Terrance MacMullan, a 1990 graduate of Georgetown Prep who is a philosophy professor at Eastern Washington University, remembers his high school as a place where women and sex “took on this mystical, fetishized, totemic role in our lives, and there was this idea that once they got drunk, they were really available for this. That was one of the psychoses or bad ideas I had about women while I was there.”

While it would be foolish to try and draw a straight line from this toxic culture to the culture that contributed to the clergy abuse crisis, there are similarities and lessons to be learned. If what happened at Georgetown Prep was supposed to stay at Georgetown Prep, there is a parallel found in the open secret of former cardinal Theodore McCarrick’s predations on young seminarians. What happened at McCarrick’s now infamous beach-house on the Jersey shore was supposed to stay at the beach-house. Priests, seminarians, and others who knew about McCarrick’s harassment remained quiet, in part because the unwritten rules of a clerical culture ensure that secrets are guarded, powerful hierarchs remain above the law, and institutional reputations are protected. McCarrick raised prodigious amounts of money for the Vatican, could easily end a young seminarian’s career, and thrived because he felt entitled, as does a young prep-school invincible whose dad just dropped a fat check to refurbish the campus. The clerical culture is also rooted in patriarchal privilege, a closed world where men rarely have to associate with women in positions of power and never have to take orders from them.

At the risk of understatement, this is not how the real world works. If you’re an outsider to Catholicism and want to understand hierarchy, clericalism, and power, think about the culture of Penn State football under one-time patriarch Joe Paterno. His top assistant abused boys for years, and while court documents show that Paterno knew about the abuse, the church that is Penn State football had to be protected. The institution was sacrosanct. A culture of secrecy and patriarchy guarded a privileged class.

Whether Kavanaugh gets confirmed or not, this dramatic moment in Washington has offered a window into those ecosystems where some young Catholic men of privilege are formed. We should affirm the best of the culture surrounding rarefied places like Georgetown Prep that serve as pipelines to power in the same way we affirm the best of our church institutions. But while we affirm and preserve, there also needs to be a willingness to fearlessly confront the toxic aspects of cultures and institutions that shape our future senators, supreme court justices, and bishops. If the old systems and institutions prove incapable of learning from failure and of reforming, it’s time to build something new on those ashes.