The Sublimity of the Super-Brat

‘John McEnroe: In the Realm of Perfection’
By Rand Richards Cooper
Movies 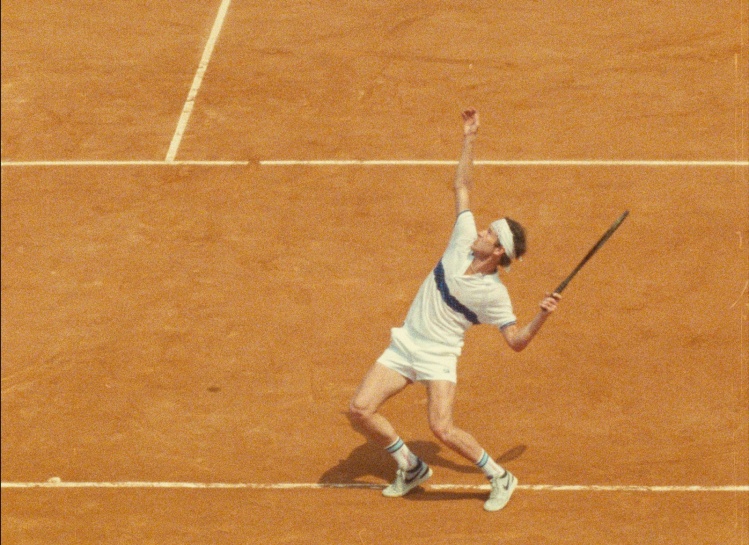 Manners. Ah, manners. Where did they go?

Our American purchase on this inflamed topic is currently shaped by such discouraging realities as online trolling, rampant partisan political bitterness, and the advent of a presidential bellicosity wantonly laying waste to long-established behavioral norms. When exactly did we all start being so rude?

For many a tennis fan looking back, John McEnroe looms as the canary in the coal mine of manners. In his incessant ranting, his brazen self-absorption, and his furious insistence on turning everyone around him (opponents, spectators, line judges, the press) into enemies, he was a proto-Trump of the tennis court. His rise capped the Americanization of the twentieth century, and of an oh-so-very British sport, that left the gentleman’s code in ruins.

Earlier this year saw Janus Metz’s Borg vs McEnroe, a biopic that used the epic 1980 Wimbledon final as a means for exploring its antagonists’ diametrically opposed personalities: the brooding, stoical Swede versus the profane and volcanic American. But parlaying a tennis match into a feature film proved difficult, and the movie’s attempts to arrogate drama were laughable—including tense scenes of Borg being shuttled about in automobiles by grim handlers, as if in a spy exchange at Checkpoint Charlie. Such struggles raised the question: How much meaning can you wring from a tennis match?

The movie is not really a documentary, but an extended meditation on the poetics of tennis, informed by any number of idiosyncratic perspectives on the athlete-as-genius.
sharetweet

A lot, it turns out. John McEnroe: In the Realm of Perfection solves the problem in ways that reflect its unusual pedigree. The film traces to the work of Gil de Kermadec, who decades ago shot thousands of hours of matches at Paris’s famed Roland Garros stadium for a national sports institute that produced instructional films. French documentarian Julien Faraut, happening upon this vast archive of 16-mm recordings, became fascinated, and chose McEnroe as the subject of a documentary that sets out to explore any number of abstruse perspectives on sport and photography in general, and McEnroe in particular. Faraut is interested in McEnroe not merely as a tennis phenomenon, but as a phenomenon, period.

The focus is on 1984, a year in which McEnroe amazingly won eighty-two matches and lost just three. The film opens with a mesmerizing series of super-slo-mo shots of the star serving—lining up along the baseline in that hunched, coiled posture of his, cocking his deliberate, long-armed windup, then launching himself up and forward. This dreamy sequence announces that we are being taken out of the realm of routine sports spectatorship and into a dimension of pure form. Faraut’s rapt fascination with motion, and with the mechanics of photographically capturing it, recalls Eadweard Muybridge’s pioneering studies with high-speed photography almost a century and a half ago.

And so from the start the movie is not what you expect—not really a documentary, but an extended meditation on the poetics of tennis, informed by any number of idiosyncratic perspectives on the athlete-as-genius. Along the way, Faraut also produces an inadvertent meditation on Frenchness, with its rampant philosophizing, an insistence on foisting as much elevated conceptual talk upon the subject as an American viewer—and especially an American sports viewer—can bear.

Throughout, the visual focus on McEnroe remains claustrophobically close (only in the last twenty minutes or so does Faraut pull back and allow us to follow an actual match, McEnroe’s thrilling 1984 French Open final against a young Ivan Lendl.) This MO follows the lead of other sports documentaries, notably German filmmaker Hellmuth Costard’s 1970 work, Football as Never Before, which deployed eight cameras to follow British footballer George Best through a single game, or a similar 2006 French film that turned seventeen cameras on soccer star Zinedine Zidane. The visual isolation created by Gil de Kermadec’s camera reflects his project’s original instructional focus, and has the interesting effect of divorcing the tennis player from the tennis match, all but eliminating his opponents—whom we see, only fleetingly, in the background. It’s as if the opponent is an interchangeable part; the real action lies within the man.

This focus delivers the core of the film’s insights into McEnroe’s notorious behavior. We’ve come to view that behavior as part and parcel of the replacement of team athletics, with all the attendant ethics of self-sacrifice, by individual sports—and also perhaps as a reflection of the modern American upper-middle-class’s fixation on its children winning at all costs, spurring a new brat-hood of which McEnroe served as an ugly avatar. And indeed, the McEnroe portrayed by Shia LeBeouf in the earlier biopic is in fact a brat, a spoiled and loudmouthed man-child.

In the Realm of Perfection dismisses this conventional wisdom and insists that we engage McEnroe on another plane altogether. The inquiry begins in our bemusement at the man-child. When McEnroe interrupts a match to vent, when he spits profane and acid mockery at line judges and referees, when he taunts fans or takes a swat at a photographer with his racquet—the crowd booing lustily—his matches approach the spectacle of professional wrestling, with its travesty of villainy. Why would a player aspire to that?

Faraut quotes a sports psychologist noting that such tantrums are counterproductive for most players. For them, anger of the kind McEnroe displays—tear-your-hair-out anger; threaten-bystanders anger—saps concentration and compromises performance. But not McEnroe. He wasn’t risking his game (nor, as many suspected, was he out to disarm his opponent); he was stoking his game by feeding on bad feelings. One is struck by how continuously and complicatedly unhappy he appears to be in this film. In ninety minutes, we see nary a smile, only a hundred varieties of annoyance, sarcasm, uneasiness, and anger. Faraut quotes the late French film critic and tennis fan, Serge Daney, who in writing about McEnroe cited “the eternal injustice that afflicts him, and him alone.” Just so. The player we see is a highly tuned winning machine whose fuel is bitterness and rage, and who requires the lurking presence of enemies on all sides in order to prevail.

As a tennis competitor McEnroe was “a man who played at the edge of his senses,” Faraut comments insightfully. At times this edgy sensitivity seems to approach a kind of sensory-processing disorder. Something always has to be bothering him. If not the perfidy of a line judge or fan, then a rough spot in the clay at his feet, or a fugitive wrinkle in the shoulder of his tennis shirt, which he picks at, adjusting and readjusting, frowning darkly.

Much is omitted from In the Realm of Perfection. One longs for perspective from other players, from sports journalists, and most of all from McEnroe himself. How did he view his own behavior at the time? How does he see it now? But Faraut refuses to indulge these conventional expectations. Meanwhile, there’s a good deal of commentary one wishes had been left out—like the endlessly elaborated conceit of McEnroe as auteur, a director orchestrating a movie in which he himself is the hero. Yes, it is interesting along these lines to learn that actor Tom Hulce modeled his portrayal of Mozart in Amadeus on his perceptions of McEnroe. But do we need the tough-guy profanities piped in from Robert DeNiro’s performance in Raging Bull? Or the barrages of heavy-metal music accompanying McEnroe’s on-court histrionics? Or the insistently metaphysical quotations from French film critics? “When you watch a tennis match, you don’t ever really know what you’re watching,” offers one. That’s often the case in this film, anyway.

Yet tennis fans will find a lot to marvel at, especially in the highly granular study of McEnroe’s unmistakable, sublimely fidgety form on the court. Surveyed up close, his body makes all sorts of unexpected motions, little leaps and jerks of his torso, which work together with the extreme looseness of his grip on the racquet and his unparalleled wristiness—a complex orchestration of body mechanics designed to direct all forces to the racquet head and create a power of touch unequalled by any other tennis player before or since.

A nimble physical genius between the lines, McEnroe was also a connoisseur of rage, even (the French might say) a gourmand of it. That such rage can function as an adjunct to competition, and not an abiding fundament of character, has been borne out by McEnroe’s subsequent transformation from enfant terrible into the resourceful and even genial tennis commentator he is today. The star’s fury proved a strictly situational thing: a means of prevailing; of being a tennis god. Once he stopped feeding the terrible need to win, and got up from the table, he could be as human as any of us.