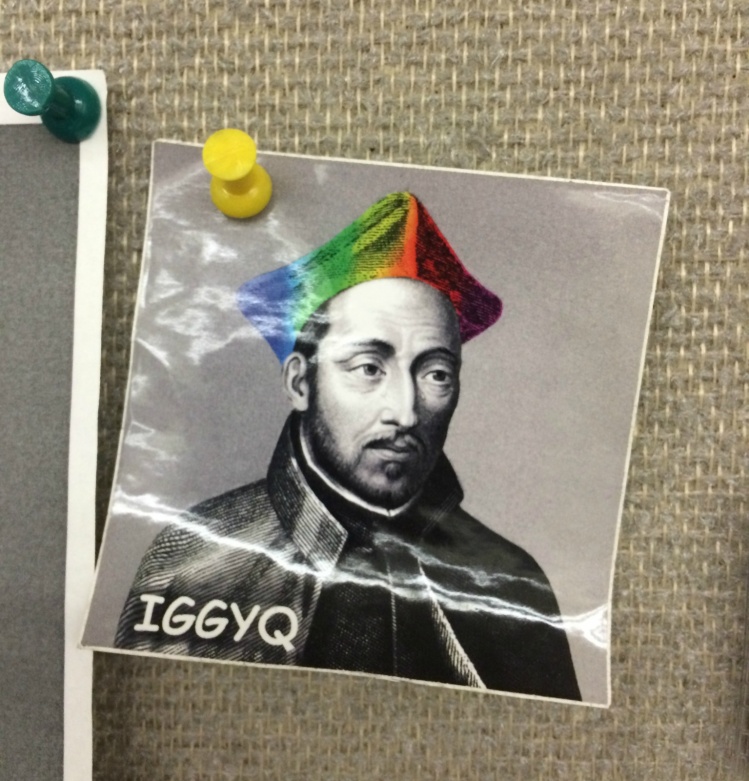 Tonight at Georgetown University the second annual IgnatianQ conference kicks off a weekend of lectures, breakout sessions, dialogues and keynotes that uniquely focus on LGBTQ issues and Jesuit values, aiming to create a community of people active in their faith, community and campus, who continue conversations. The first IgnatianQ (after ivyQ) was hosted by Fordham last year—created, planned and organized entirely by students. It grew from one conversation between two people on a roof to a three-day dialogue of 96 participants traveling from six different Jesuit schools to attend. And now it's in it's second year.

Bolstered by the University’s mission statement and the powers vested in academic freedom, the group of organizers approached the Theology department first with a 12 page proposal they’d carefully put together through months of weekly meetings, unsure and anxious about how well it’d go over. They not only received “overwhelming support” of the idea for IgnatianQ but also a keynote speaker, $300, and a room to hold meetings on campus—legitimacy. Soon enough many other departments signed on and they had enough money and backing to let real preparations for the conference begin. Anthony, one of the originators, remembers with slight disbelief meeting with the University vice president, who’d need to talk with the president (both priests) who’d need to approve the conference. “I told him ‘I pray that the politics of man do not interfere with the work of the holy spirit in organizing this conference’” Plainly, “Don’t let your reservations about the word queer get in the way of what these students need right now.” And they didn’t.

The need for LGBTQ folks to have their own space free of judgment, fear, and constraint was a top priority in organizing the conference. But straight people were encouraged to come too. “A huge part of any movement is allies,” Clarissa, another originator, explained. “We need to provide resources, and give tools to Allies alongside ourselves.”

Of all of the programming I attended in last year's conferece, the student panel was perhaps the most helpful of all the resources and tools, because of the honesty. There was a giddiness in the room, a sense of long-awaited disclosure, relief, community. Students from Boston College, Georgetown University, Gonzaga University and Fordham answered difficult, private questions, like “What is your experience being LGBTQ and spiritual?” One said,

Asked "where was God in the journey of coming out?" another student said,

When I think about coming out, it’s a question tied to spirituality and the lack thereof for me. I don’t use the world of Christian baggage. As a gay, God-follower, I’ve lived in two closets. Among church people I didn’t want to say I was gay. Among queer people, I didn’t want to say I believed in God. So I never felt fully myself.

The room reacted with nods and finger-snaps. That experience of being isolated was shared. “Being a God person and a gay person, I’m the person friends come to when they believe in God and are Queer.” While coming out to his family, he was asked “Why would God make you gay?” and he said that maybe “as a gay Christian I can be a bridge between these two communities that have had a lot of hate towards each other. And then my Dad said, ‘Oh so you’re a bridge? Good for you.’” The room laughed.

Another student told of when, "in a place of deep desperation," she wrote a letter to God “begging him to change” her. “I hid the letter and when I found it years later burned it instantly.” When she got to a place where there were fellow queer people around she felt accepted, but felt the experience cause her to be “extra against the church and extra against norms. God wasn't a part of it at all.” This changed when she found a local United Methodist Church with a vibrant LGBTQ community. The experience of spiritual and open community allowed her to have the strength to come out to her mom, she explained, because she felt able to pray. “I prayed for peace before. I prayed to trust in my mom's strength.”

To provide academic tools, theology professor Ben Dunning was invited to speak about “Queerness, Queer Theology, and Theological inquiry.” He highlighted something important I think is often overlooked, that Queer theory is not limited to gender/sexuality. It speaks to how our social forces constitute and denigrate identities, or what it means to be human. Queer challenges a complacent status quo. Particularly, for people whose gender does not fit neatly into the norms, this challenge of being queer is not about self-indulgence or a need to rebel, but simply because “Possibility is not a luxury; It is crucial as bread” (a quote from Judith Butler).

Dunning said that although it’s impossible to find an Early Christian pro-gay narrative, the narrative we have cannot be constructed into one single statement on gender/sexuality and what it means to be a human being. “It’s all too accepted that the Christian story is all too simple, straightforward. What it means to be female and male. Natural law arguments, in strictly historical terms, in its way of interpreting the Christian story, is not right. The Christian story is based on gaps,” and so the lack of anthropological coherence “threatens its collapse.”

So queer theory belongs in the curriculum of a Jesuit university, not in spite of but because it challenges the strictly “binary” way we have been taught to see the world, in part by Natural Law theology and the Christian narrative of sexuality. But where left-leaning interpretations of Romans 1, for example, abound in theoretical arguments, they lack the pragmatism found in right-leaning articles that list practical ways gay Christians should live and how straight folks should respond to them. "This is something to be conquered not only with academics but with practices, cura personalis, faith." Dunning proposed that religion can do this if we take into account the embodied ways of being human that are religiously constructive. “There is no richer place for this than a conversation about sexual identity. It can legitimately ignore the challenge that the history of difference poses – the history of difference still embodied stances of faith seeking understanding.”

The talk that received the most negative reception from the student attendees was the talk that presented official church teaching on homosexuality--“Unapologetically Catholic & Christian.” Right off the bat: “We are a Catholic University, what we do is follow the gospel of Jesus Christ and we do not apologize. It’s a venerable feat that we can get together for something like this.” To begin a talk like this suggests that the participants of IgnatianQ were gathering together to demand an apology from the church for following the gospel of Jesus Christ. If in fact there were any demand for apology (and there wasn’t), it would be that the church apologize for not following the gospel of Jesus Christ.

As Msgr. Quinn put it in the conference’s opening prayer, “Experiential wisdom matters and sharing it with other is a good start. But it is as complicated, socially evocative, and messy as the topics themselves.” If IgnatianQ did nothing else, it did for many what the church does: give a person the experience of being loved by God, an experience denied perhaps because of words, words particularly from Catholics that cause shame, hurt, and isolation. But in truth it did much more. There is something to be said for the importance of experiential wisdom, of not just “seeing the person” but of hearing, and actually listening to him, her, or hir. Then, eventually, we can begin to contemplate what the church should be rather than what the church has been.