A year without Mass
By B. D. McClay
Religion
Spirituality
The Last Word 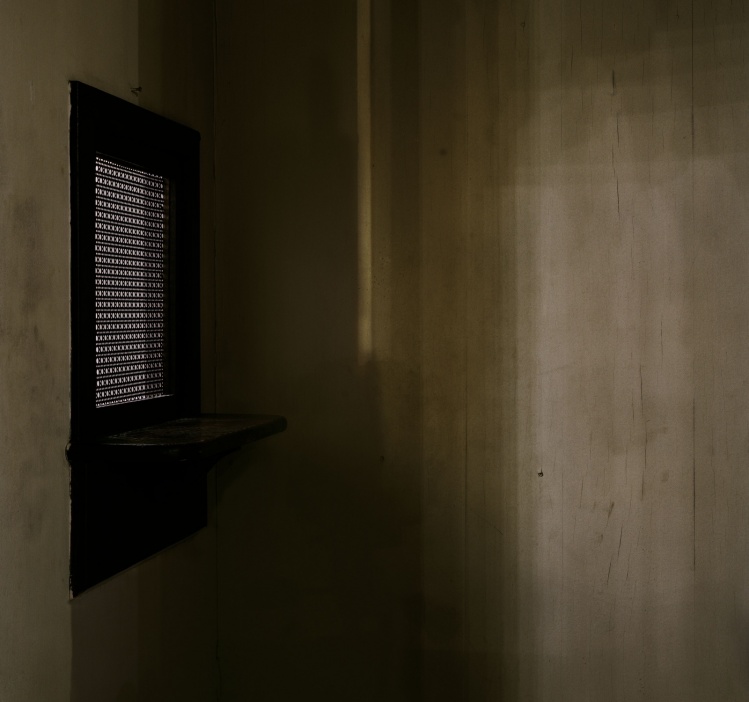 “Corpus Christi,” from the series “Reconciliation” by Billie Mandle

I go to confession mostly to confess some variation on the same three or four sins. Sometimes I can go quite a while—months, even—before I fall into one of these sins again. Sometimes it’s the next week. But whatever the length of time, it’s hard not to think that when I show up to the confessional, however long it’s been, the priest—whether or not he’s supposed to—thinks to himself: ah, here comes sloth girl again.

By the time I’m fully vaccinated and feel like I pose no serious threat to the parish’s elderly—and so can attend again—I won’t have been to Mass in more than a year. This has, to put it mildly, not been great for me. Spending Sundays alone has not only failed to bear any spiritual fruit, but I also forget that it’s Sunday half the time, which adds another item to the list of my failures. Being alone with myself has made my habitual sins feel inescapable. Even if I don’t really want to commit new, exotic sins, it would be nice to change things up. (Forgive me Father, I’ve started running guns, I just wanted something to do....) I recently moved, and the thought that setting foot in a new church for the first time would not be for Mass, or for stopping in to pray, but for confession was a little demoralizing.

Without Mass and with only confession, you feel slightly set up, like you’ve been abandoned by a babysitter who leaves forbidden things in your reach, then points out your failures to your parents when they come home. Right now, my relationship with God seems to resemble the one I have with my building management, who send angry emails and tape messages to doors if they find something they consider recyclable in the rubbish (anybody’s rubbish, I should say). I want to say: but I am recycling, almost all of the time! And plastics recycling is a sham anyway! I read about that in the New York Times! But much like the plastic containers and the dog-food tins piling up in my sink, my sins always seem to be hanging around. The occasions of them certainly are.

It’s not that I don’t appreciate or need confession—I’m continually grateful that it exists, and I certainly have a lighter step after I leave. It’s more that I have a certain kind of stereotype rolling through my head these days, the kind of oft-parodied Catholics who sin throughout the week, go to confession, receive Communion, and then go straight back to their typical ways. The stereotype is that such Catholics are insincere and bet-hedging. Are they really contrite? Maybe they think they are, but isn’t that what a person who isn’t contrite would think? I think that what’s often hard to practice about forgiveness is not doing it once, but doing it for the fifth time, or the tenth, or the seventieth. It runs counter to the practical ways we learn to think about other people: as the self-help saying goes, when people show you who they are, believe them. If you or I do something five times, or ten, or seventy, at what point does even the posture of seeking forgiveness and wanting to change become impossible to take seriously?

I think that what’s often hard to practice about forgiveness is not doing it once, but doing it for the fifth time, or the tenth, or the seventieth.
sharetweet

Forgiveness and contrition chase each other around in my head. A bad judge of my own motives in the best of circumstances, I find the ability to judge whether or not I’m sincerely contrite impossible. Is real contrition even possible in an atmosphere of assured forgiveness? Since contrition is the only thing being asked of me in this scenario, it seems like a cheat to turn sorting that out to God. But what else can I do? Who else could really know?

I’ve always had a horrified identification with, or love for, the people who promise to do better and don’t, like Lucy with the football, promising she won’t lift it up this time. What I like to think is that she really believes every time that she won’t; then she does, to her own shock every time. (Which means, I suppose, that Charlie Brown is God—perhaps best not to think about that too much.) The Catholic focus on occasions of sins strikes me as compassionate in this sense; it acknowledges that people, on the whole, want to be better people and view themselves as capable of being better, if they could just exercise the will to do so at the right time. So clear out of your life those things that make you do what you don’t want to do—though some sins seem like they lend themselves better to this approach than others. (What’s the near occasion of sin for wasting time? Asking for a friend....)

“I don’t think God wants me to fail,” I said to the priest on one of my recent visits to the confessional. “But it feels like he’s basically resigned to my failure.” “Well,” he said, after a pause, “it’s dark if you look at it like that.” His point was that God can encompass my failure. God is not the babysitter waiting gleefully for me to stumble into one trap or another. He desires the best and is ready to hear the worst.

People love arguing about forgiveness in a more abstract sense, and they love arguing about it in terms of the big sins—namely, sex and violence (not to mention sexual violence). I’ll admit I don’t really know what forgiveness means if we aren’t talking about something that happens between two people or between a person and God. It might be a limitation of my moral imagination that I can think of collective guilt but not collective forgiveness. Even there, collective guilt does not precisely involve guilty individuals, whose own guilt will be limited to the things they’ve actually done or failed to do. The remedy for a collective wrong is justice administered on a wide scale, not forgiveness. But guilt—the kind of guilt that takes me to confession—is always specific. Forgiveness seems like it has to be specific too. Whenever stories about somebody’s sins come out, with the attending questions of what “we” should do about them, I always think: Who’s we?

Like most sins, mine are shameful and embarrassing. But what is most distressing about the spiritual effects of a year of only confession and no Mass is that I find myself descending into legalism. Was this that bad? Can I accurately recount this, that, or the other thing? Have I cleared all my bases, ticked all the boxes, gone through the right checklist? Confession is what it is regardless of my own attitudes, but any serious self-reflection causes me to realize that my spiritual life has grown much worse. There’s no real lemonade to make out of it. I have basically become a worse person over the past year: worse in my habits, worse toward others, more distant from God. I believe that God can always make good from evil. But looking over this past year, what I mostly know is that I didn’t. Whatever comes next, it can’t come soon enough.