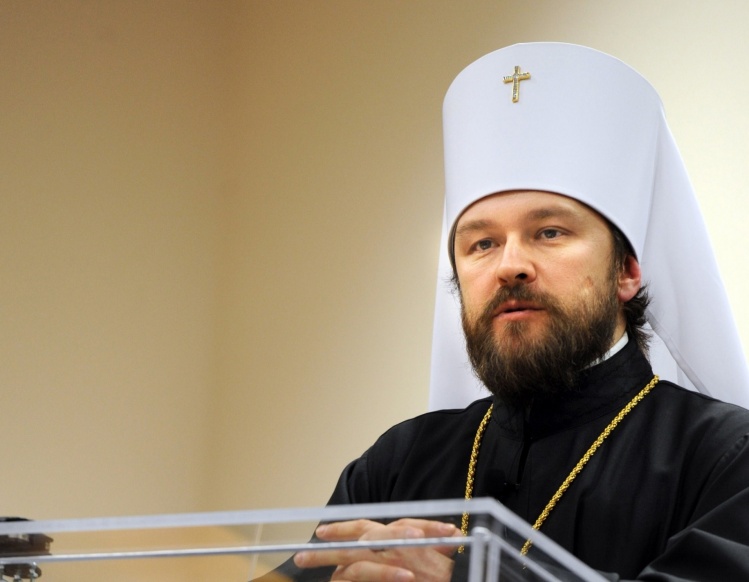 Metropolitan Hilarion (Alfeyev) of Volokolamsk has served as chairman of the Moscow Patriarchate’s Department for External Church Relations since 2009. He is an outspoken critic of the independence granted to the Orthodox Church in Ukraine by the Ecumenical Patriarchate of Constantinople, which—in his frequently bombastic and belligerent statements—he associates with the alleged corruption of the West and the perceived geopolitical dominance of the United States. His reactionary and parochial worldview centers on a denunciation of modern culture and a return to an imagined golden age of Russian Orthodoxy. But has the Russian Patriarchate effectively become a department of Sergey Lavrov’s Foreign Ministry? Are the Department for External Church Relations and the Russian Foreign Ministry acting on behalf of global Orthodoxy or of Russian state interests?

Some years ago, a neoconservative theologian and cultural critic observed that “Metropolitan Hilarion does not always speak the truth.” Since I have on several occasions witnessed the Russian prelate’s unabashed dishonesty before his peers and seniors, it is becoming increasingly difficult to attribute his persistent misbehavior to a mere lapse in judgment. There must be some other reason for the abject shamelessness of a powerful clergyman and prolific scholar. Surely his words have a purpose.

Yet, given Alfeyev’s strained relationship with the truth, how can we discern, with any confidence, the difference between what beats in his heart and what flows from his lips? When the metropolitan repeatedly peddles conspiracy theories about Ukraine, the United States, and even COVID-19, one really wonders whether fact and fiction are so scrambled in his mind that he no longer knows the difference. When his demagoguery includes lazy sophistry—ironically echoed by many Evangelicals in America—about the West as decadent and the East as righteous, or the West as schismatic and the East as synergistic, his religious vision not only reeks of nostalgia for a bygone imperial grandeur that never really existed, but also resembles the hegemonic ambitions, rooted in the fifteenth century, of a “third Rome.” But which defunct and discredited tyranny really determines his worldview: The Czarist or the Soviet? Is it the former’s incestuous relationship between Church and state or the latter’s subjugation of the Church to the state? Either way, it is difficult to tell where one institution ends and the other begins.

It is already clear that they want to undermine the position of Orthodoxy. They are destroying the Serbian Orthodox Church, its canonical territory, and trying to extract Lebanon from under the Antiochian Patriarchate. In Russia, the state does not interfere in the affairs of the church. But when other countries interfere in the affairs of the Russian Orthodox Church and its sisters in the Orthodox world, the state is already obliged to protect the interests of its fellow believers and like-minded people.

I suspect that most Orthodox Christians would be alarmed by the labyrinthine descent of the Russian Church into a mere ward of the Russian state.
sharetweet

[C]ertainly, the fact that the U.S. secretary of state met with the schism leader in Ukraine but did not meet either with the head of the canonical Church or Muslim or Judaic religious leaders shows for the umpteenth time that the “OCU” [Orthodox Church of Ukraine] is a project of the U.S.A., a political project from beginning to end. This is not something that was born in the depths of church life; this is something that was created by the Americans in order to once again embody the principle by which they are guided: “divide and rule”…. Thus the division that had already happened on the political level happened on the church level as well, and the person who implemented this American plan was Patriarch Bartholomew of Constantinople. His dependence on America is quite obvious and common knowledge; as a matter of fact, nobody hides it.

Should we not be insulted by Lavrov’s paternalistic and patronizing attitude toward global Orthodoxy? Should we not be appalled by Alfeyev’s decision to accept an award from Vladimir Putin for his contribution to “international relations” on behalf of the Russian state? In the words of the Church’s own foreign-affairs leader, the Russian state is “increasingly engaged in safeguarding the sacred boundaries of our church.” I don’t—in fact, I could never—blame either Alfeyev or Lavrov. It’s the way they were molded to see the world, and it’s the way they demand that we see the world. But I suspect that most Orthodox Christians would be alarmed by the labyrinthine descent of the Russian Church into a mere ward of the Russian state.

What is clear is that the tyrannical authorities of Church (Patriarch Kirill) and state (President Putin) still retain the scars of Russia’s imperial past, while their underlings in the Church (Metropolitan Alfeyev) and state (Minister Lavrov) faithfully enforce the imperial machine’s soulless indoctrination. As another propagandist once said: “If you tell a lie big enough, and keep repeating it, people will eventually come to believe it…. For the truth is the mortal enemy of the lie, and thus by extension, the truth is the greatest enemy of the state.” It is hardly a secret that the Russian state seeks to exploit and inflame divisions within Orthodoxy in order to advance its own geopolitical agenda. This is why Patriarch Kirill unapologetically admits that “the church enjoys equal dialogue and common goals with the state,” despite the fact that the cost of such an unholy alliance today is potentially far greater than any coerced acquiescence on the part of the Church under Communism. It is for this ignoble reason—not some lofty humanitarian ideal or ecclesiastical principle—that Putin and Kirill work hand-in-glove to promote Orthodox Christianity in the Slavic lands. It has never really been about Orthodoxy at all, but rather about the overweening power of the state exploiting the Church and the Church prostrating itself before the state. Do other Orthodox Churches even recognize the face of Putin in the statements and actions of Kirill?

I wonder if it is simply too unbearable for Moscow to accept the incontrovertible fact that Ecumenical Patriarch Bartholomew granted autocephaly to Ukraine of his own accord—in his exceptional capacity as “first among equals” with exclusive jurisdiction of appeals. After all, neither the Russian state nor the Russian Church have provided any evidence for their claims regarding the alleged influence of the United States on the Ecumenical Patriarchate. In public addresses, personal interviews, and private audiences, Bartholomew has not once mentioned the United States in connection to autocephaly in Ukraine. Perhaps it is a threat to the conceit of Russian supremacy that the patriarch simply decided it was just and proper to respond to Ukraine’s request, just as in the past the Ecumenical Patriarchate had granted autocephaly to every other ethnic church—including Russia’s. Or perhaps it is a source of embarrassment for Russia that the patriarch is plainly not beholden to any state authority with respect to internal or external Orthodox matters, unlike other ethnic churches—including Russia’s.

Muscovite defenders cite a “symphony” between Church and state, but this too is a misappropriation of an obsolete Byzantine model. The actual motive behind Church-state relations in Russia is more Machiavellian: the state uses the Church to advance its revisionist and revanchist agenda, while the Church uses the state to fulfill its own hegemonic ambitions.

In this respect, the unity of all Orthodox may not actually be the primary concern of either Church or state in Russia. The point of contention has never been about primacy and autocephaly, but about whether global Orthodoxy should be subordinate to Russian national interest. Nor is the real objective to defend Orthodox communion—after all, Moscow has demonstrated that it can recklessly obstruct and sever communion on purely vindictive grounds. Rather, it is about whitewashing the Kremlin’s odious record and sustaining the ethnocentric religious and cultural system of Russkiy mir. When Hilarion and Lavrov condemn America’s racist past, they conveniently overlook America’s willingness to debate such issues openly in the public square. Can we the say the same for Russia? The world bears daily witness to the brutal consequences of protest or dissent in Russia. To adapt the words of an American statesman: Russian chauvinism is “the death of the soul. It is the organization of total conformity—in short, of tyranny—and it is committed to making tyranny universal.”

There is indeed a purpose in the words of Hilarion Alfeyev. It is the same purpose that imbues the words of Sergey Lavrov. Metropolitan Hilarion and his state patrons are more interested in a spectacle of conformity than in a spirit of unity. It’s just that we can’t tell who is speaking on behalf of whom anymore. The hand has grown into the glove.