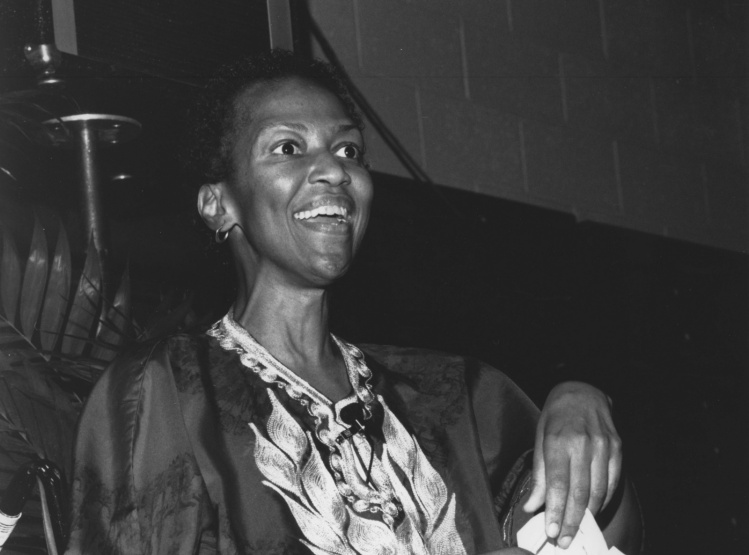 In August Loyola University Maryland removed Flannery O’Connor’s name from a dormitory on its campus. In explaining the change, the university cited racism in O’Connor’s personal correspondence, as well as the need for residence halls to be a “home and haven for those who live there” and to have names that reflect Jesuit values. The building was renamed in honor of Servant of God Sr. Thea Bowman, FSPA.

Of course, Loyola’s decision has generated controversy, given O’Connor’s gargantuan presence in Catholic literary spaces—particularly white Catholic spaces—as  “one of America’s most iconic Catholic writers” and “one of the boldest and most original writers in the American Catholic literary tradition.” Commonweal so far has published three divergent perspectives on Loyola’s decision and its impact on O’Connor’s legacy. But limiting this conversation to O’Connor and “cancel culture” constitutes a failure of the imagination. Loyola’s decision matters for a number of other significant reasons, not least for how it helps us more fully and honestly imagine what the American Catholic Church needs to be. Bowman herself understood what is necessary. Through her activism and pioneering work in African-American Catholic spirituality, she challenged the Church to confront its own systemic racism and affirm Black Catholic identity—to become its own better self.

The only child of Theon Bowman, a physician, and Mary Esther Bowman, a teacher, Sr. Thea Bowman was born in Yazoo City, Mississippi, in 1937. Though she came from a deeply religious background, she didn’t find the spiritual nourishment she sought, until—while still a young girl—she saw the work being done by the Missionary Servants of the Most Holy Trinity in Canton, Mississippi. Inspired, she converted to Catholicism at the age of nine. She went on to be educated by the Franciscan Sisters of Perpetual Adoration, who had been invited to Canton to provide the kind of education for Black children that wasn’t available to them in the public schools of the Jim Crow South. At fifteen, she entered the order at the community’s Mother House in La Crosse, Wisconsin. A career educator, she received a PhD in English from Catholic University of America in 1972, and was a founding member of both the National Black Catholic Sisters Conference and the Institute of Black Catholic Studies at Xavier University of Louisiana.

Loyola’s decision comes at a time of reckoning with systemic racism, hundreds of years overdue for the Church and its affiliated institutions.
sharetweet

When she returned to Mississippi to care for her aging parents, she accepted the invitation of the local bishop to direct the Office of Intercultural Affairs in the Diocese of Jackson in 1978. She was diagnosed with cancer in 1984, but even as her health declined, Bowman remained committed to her work. In fact, key milestones in her career—her contribution to the Lead Me, Guide Me Hymnal, which was first published in 1987, and her address to the meeting of the U.S. Conference of Catholic Bishops in 1989—came after the diagnosis. It was through this work closer to the end of her life that she articulated and affirmed African-American Catholic identity. In doing so, she made the work of scholars who would follow her—including me—possible. Naming a building for Thea Bowman is the least any Catholic institution can do. Loyola’s decision comes at a time of reckoning with systemic racism, hundreds of years overdue for the Church and its affiliated institutions.

I’ve never been interested in O’Connor or her work. The Catholic literati may criticize me for this. So be it. I find the debate over O’Connor’s racism to be less a difficult grappling with uncomfortable truths than a hand-wringing over remarks that were previously known to only a few intellectuals. This is especially true for white people confronting the issue as if it’s brand new. As I’ve written previously, just because a discourse is new to some doesn’t mean it’s new, and this holds true for discussions about O’Connor’s racism. Even though I am a lifelong Catholic, and O’Connor is a prominent figure in Catholic literature, it was always clear her work wasn’t for or about me. Perhaps that is why I wasn’t interested in it. Yet, as a Black Catholic woman, I have always been expected to see myself in white spaces because Catholicism in the United States was, and in many ways still is, synonymous with whiteness.

Literature is not the only space where this happens. Consider a recent America article by Archbishop William Lori of Baltimore, in which he calls on Catholics to forswear racism and commit to racial justice. It’s titled “How Church Teaching Can Help Explain Why ‘Black Lives Matter.’” Clearly, the article is directed at white people—but Lori never uses the word “white,” only “Catholic,” since the two mean the same thing to him. That the leader of an archdiocese so closely associated with Black Catholics would see these as identical is especially disappointing, but also telling. The piece isn’t an explainer on the commonalities between Catholic social teaching and the #BlackLivesMatter movement, the entire point of which is to affirm the life and dignity of Black people who have been harmed deliberately and systematically as a result of racism, white supremacy, and colonialism. The #BlackLivesMatter movement also specifically affirms the dignity of the queer and transgender communities. Neither of these positions conflicts with Catholic social teaching’s principle of “Life and Dignity of the Human Person.” Furthermore, both Catholic social teaching and the #BlackLivesMatter movement call for solidarity and collective action in achieving justice; #BLM’s focus on concentrating the work of justice at the local level is the embodiment of the principle of subsidiarity. Lori ignores all of this, and simply explains to white Catholics why Blacks should be allowed to live, as if our existence requires his analysis and justification.

Limiting this conversation to Flannery O’Connor constitutes a failure of imagination. It’s much bigger than her.
sharetweet

This is why limiting this conversation to Flannery O’Connor constitutes a failure of imagination. It’s much bigger than her. It is well documented, for example, that Chloe Anthony Morrison converted to Catholicism as a preteen and chose St. Anthony of Padua as her baptismal patron, which is how she came to be known as Toni. Yet in her work, Morrison does not evoke Catholicism in the obvious ways, such as through the religious practice of her characters, but rather through the imagery she employs: bloodied, lynched bodies in Beloved, and immense physical sacrifice made for love and the absence of other options in Sula—imagery that also calls to mind a particularly Catholic view of the Crucifixion. Sula is an especially powerful example of how nuance can actually expand our Catholic imagination. One of the characters, Helene, is a Black woman and faithful Catholic, yet when she comes to the Black town of Medallion, Ohio, from her native New Orleans, there is no Catholic church for her to attend. So she chooses to join “the most conservative black church” instead. I first read Sula as an undergraduate student, only a few years after Morrison won the Nobel Prize for literature. Encountering a character in literature who was a Black Catholic woman, even a relatively minor character like Helene, was joyously expansive to my own imagination. It was truly a revelation! The way Morrison tells us the Catholic Church did not have the infrastructure to minister to Helene in her new home was also a revelation, and not a joyous one. In a single sentence she makes a major statement about the Catholic Church’s failure to serve its Black members.

Louise Erdrich, winner of the National Book Award and two-time winner of the National Book Critics Circle Award, does something similar in examining Catholicism’s impact on Native American communities in the Midwest. The character Sister Leopolda, who appeared in Erdrich’s debut novel, Love Medicine, features in much of her earlier work, and even haunts The Last Report on the Miracles at Little No Horse, which takes place after her death and as her cause for canonization is investigated. Sister Leopolda is abusive, violent, and destructive, and by extension represents the domineering, even cruel, institution of which she is a part. There is also Father Damien, the main character in The Last Report on the Miracles at Little No Horse, who is beloved by those on the reservation where he lives and serves, even though he promotes Catholicism at the expense of traditional Ojibwe practices. Erdrich’s depiction of Catholicism is not as corporeal as Morrison’s, but it’s no less painful.

These two writers, from the two most marginalized communities in the United States and in U.S. Catholicism, present us with an institution that wounds those already wounded by the broader society. Could that be why they’re not readily identified with the Catholic literary imagination? Yet, this is exactly what we need the broader Church to be—an institution that is willing to fully acknowledge and articulate the ways it has hurt its members. And we have to be imaginative enough to embrace the possibility of that.

Not long before her death, Sr. Thea Bowman addressed the U.S. Conference of Catholic Bishops:

What does it mean to be Black and Catholic? It means that I come to my Church fully functioning. That doesn’t frighten you, does it? I come to my Church fully functioning. I bring myself, my Black self, all that I am, all that I have, all that I hope to become, I bring my whole history, my traditions, my experience, my culture, my African American song and dance and gesture and movement and teaching and preaching and healing and responsibility as a gift to the Church.

Bowman said this after having survived a pattern of racism and racialized abuse from her own religious community that probably would have compelled others to turn away not only from their vocation, but also from the Church entirely. Her biographers describe how she was often treated as a novelty instead of a person, and recount how at the age of sixteen she was told by older sisters in her community that “Black people go to nigger heaven together with the dogs and other animals.”

We all need to be reminded of Sr. Thea Bowman’s witness and her work—those of us who bear the wounds of racism and those who inflict them. It matters who we choose to honor in public spaces, both as a society and a Church. It matters who we choose to celebrate. Currently, there are no Black saints from the United States. That could change, and it needs to: Bowman is one of several Black Americans under consideration for canonization. Naming a building for her and championing her cause for canonization solidifies her legacy and ensures that she is known not only among Black Catholics, but also among all Catholics. Better still, it extols the bravery required to unwind the racism that is woven into our Church.