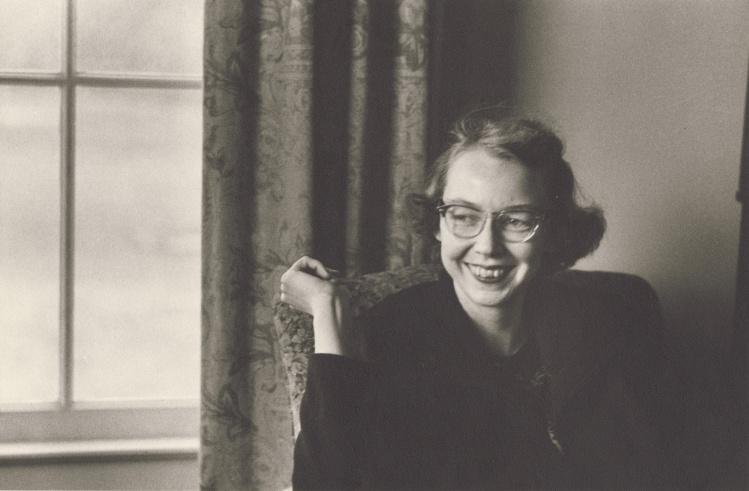 The deed is done. A week after the decision by Loyola University Maryland to remove Flannery O’Connor’s name from one of its buildings, the cherry-pickers arrived on the school’s bucolic campus in northeast Baltimore and, letter by letter, the name of one of America’s most iconic Catholic writers disappeared from the dormitory that had been known for more than a decade as Flannery O’Connor Hall.

The unnaming was anticlimactic. The campus is empty, not only because it is high summer, but also because of COVID-19. As a result, there were few witnesses. When students arrive back on campus, whenever that might be, few are likely to notice the change, because these days so few undergraduates are devotees of literature. Most are probably unaware of who Flannery O’Connor was and of the books she wrote. She meant little to them before, and will mean less than little after this.

But to a great many people, Flannery O’Connor means a great deal. This has never been more evident to me than now. In the wake of the public statement issued by the university’s president, Rev. Brian Linnane, SJ, explaining that O’Connor’s name would be removed because she does not “reflect Loyola’s Jesuit values,” hundreds of writers, scholars, readers, and admirers of O’Connor’s work have expressed their shock and sorrow to see her repudiated by the university. Many have posed the question, in essays, in emails, and in social-media posts: How is it possible that O’Connor, a devout Catholic who embraced her vocation as a Catholic as passionately as she embraced her vocation as a writer, could be ‘canceled’ by a Catholic university, and, effectively, her own Church?

This question is easier to answer than one might suppose. It’s possible because of an essay published in the June 22 issue of the New Yorker, a magazine not generally sympathetic to Catholic writers, and written by Catholic critic and biographer Paul Elie. In the essay, bearing the incendiary title “How Racist Was Flannery O’Connor?,” Elie replicates passages from a recent book on Flannery O’Connor and race, using them to try to prove that O’Connor was a racist.

In the interest of full disclosure, I wrote the book in question, Radical Ambivalence: Race in Flannery O’Connor, wherein I present and explore those passages in an effort to arrive at an understanding of how a writer who created the powerful anti-racist parables we all know and admire—“Everything That Rises Must Converge,” “The Artificial Nigger,” “Judgment Day,” “Revelation,” and more—was in her personal correspondence also capable of entertaining and confessing racist thoughts.

Elie mines the book for what he refers to as “nasty” passages, removes them from the historical and personal context necessary for understanding them, and presents them to the New Yorker readership with little explanation, all as evidence of O’Connor’s American sin of racism. The problems with his essay are many. It is confusing, it is irresponsible, and it is an attempt to make the erroneous claim that he is the only critic ever to deal frankly with O’Connor’s complex attitude toward race. Critics have been wrestling with this since the early 1970s. Readers of Elie’s essay are never informed of this. There is, in short, nothing new or notable in what he presents.

The canceling of a writer who possesses the wisdom and the power of Flannery O’Connor demonstrates our impoverished imaginations, our narrowness, and our inability to embrace complexity.
sharetweet

What is notable is the unabated accusatorial tone; the lack of any attempt to contextualize O’Connor’s feelings about race in the time and place she inhabited (the racist culture of the American South in the ’50s and ’60s, at the height of the civil-rights movement); and the lack of interest in honoring the complexity of a writer who was sorely tried by her times and by her conscience, who confessed honestly to her sins in her correspondence, and who atoned for her sins by writing anti-racist fiction that exposed the ugliness and horror of racism in the people she lived in the midst of, and in herself.

Elie’s essay has caused a great deal of damage. As soon as it was released online, Twitter lit up with public denunciations of O’Connor and avowals from former admirers that they would never read—or teach—her books again. More than one declared dramatically, “Flannery O’Connor is dead to me.” Conversely, admirers of O’Connor, who know something about the reality of her life and the pernicious presence of racism in the mid-twentieth-century South, lamented Elie’s careless and cavalier treatment of this complex subject. But the most concrete expression of that damage arrived in my inbox the day after the article appeared. A student from Loyola University Maryland was moved to enlist my help with a movement she was organizing to have Flannery O’Connor’s name removed from one of the buildings on campus. She was horrified to read that O’Connor was a racist and lamented the “hate” she had expressed toward African Americans. (It is important to note that this is a word O’Connor never uses to describe her attitude toward African Americans, either in the passages quoted in the New Yorker or otherwise.) In our emails back and forth, I tried to explain to her that she was mistaken in her understanding of O’Connor’s writing and the reasons why I would not support such a campaign. I tried to explain that O’Connor was valuable to us precisely because of her experiential knowledge of racism. I tried to explain the ways in which her stories reveal and repudiate racism. I tried to explain that in her ambivalence about race, O’Connor’s inner war between her best (anti-racist) self and her worst (racist) self is the same war that all white people who are born into and (mal)formed by a racist culture fight, if they are honest enough to admit it. I tried to explain that O’Connor is the perfect writer for our moment. But she did not believe me.

The Loyola student initiated an inaccurately worded petition at change.org and garnered more than 1,000 signatures. Many of the signers admitted to not knowing who O’Connor was, but they heartily affirmed her erasure. The university president convened a small committee. No students were present. Only two faculty members participated, one from the theology department and one from the English department. They were the only two people familiar with O’Connor’s work. The committee arrived at a decision in what seems to be record time. And so little more than a month after the New Yorker essay appeared, the cherry-pickers showed up on campus.

My own role in this admittedly small drama is also a small but, I think, meaningful one. It was my book Elie used as a launching point for his essay. It supplied some of the passages he used to discredit O’Connor. His hijacking and misappropriation of my scholarship has been noted by scholars in other venues, including Amy Alznauer, Micah Mattix, Dave Griffith, and Jessica Hooten Wilson, among others, so there is no need for me to belabor this. They describe Elie’s misrepresentations more eloquently than I can.

But my other role is to try to intervene in the cancelation of Flannery O’Connor. I, along with a group of O’Connor scholars, have written a letter to Rev. Linnane laying out the reasons to resist the pressure to do so, based as it is on misunderstanding and misrepresentation of her life, her person, and her work. The letter (which you can read here) opens with a statement the writer Alice Walker delivered to Loyola on July 27: “We must honor Flannery for growing. Hide nothing of what she was, and use that to teach.” At first the letter circulated among colleagues and acquaintances, but as the word got out about Loyola’s intentions, more and more signatories contacted us, wanting to add their names to the letter and to protest the absurdity and injustice of the decision. As of August 1, there were more than two hundred signatories. Among them are some of America’s most celebrated writers, including writers of color, theologians, and revered scholars of Flannery O’Connor, along with priests (including a number of Jesuits) and devoted readers whose lives, minds, and hearts have been shaped by their encounters with her.

The letter is admittedly late. O’Connor’s name has already been removed. The action we were hoping to prevent has already taken place. But the conversation is far from over. The voices of artists who offer a perspective that seems out of step with our moment are often the very people we should be hearkening to. The canceling of a writer who possesses the wisdom and the power of Flannery O’Connor demonstrates our impoverished imaginations, our narrowness, and our inability to embrace complexity. Our hope is that the erasure of Flannery O’Connor will be recognized as a mistake, that her name will at some point be restored to the community of students and scholars at Loyola, and that upcoming generations might read her work, know who she is, and care whether her name endures or whether it does not.

Angela Alaimo O’Donnell is a professor at Fordham University and is Associate Director of Fordham's Curran Center for American Catholic Studies. She is the author of four books on Flannery O'Connor, including Andalusian Hours: Poems From the Porch of Flannery O'Connor (Paraclete 2020) and Radical Ambivalence: Race in Flannery O'Connor (Fordham 2020).