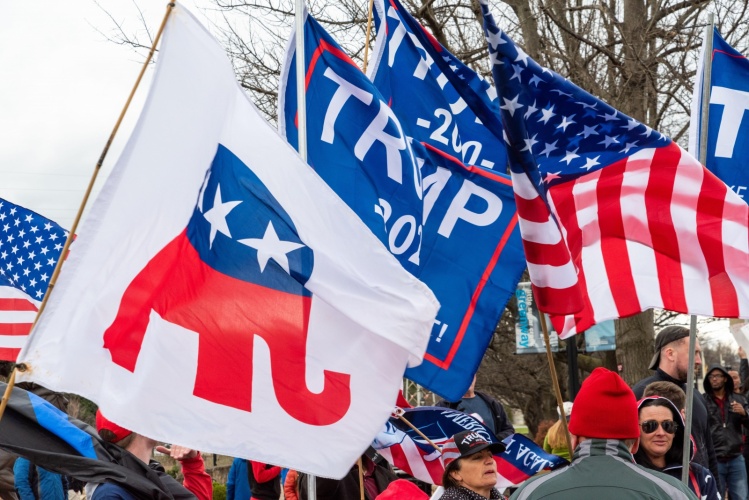 The Declaration of Independence asserts that the consent of the governed is the only foundation of legitimate government, but our nation’s history has been marked by fierce struggles to expand the franchise to every adult citizen, and its past is littered with dire warnings from privileged elites that democracy will degenerate into mob rule. It might be pleasant to assume that those days are behind us. They are not. Whatever high-minded justifications its apologists may use to disguise such a disturbing reality, the Republican Party under Donald Trump has abandoned even a minimal commitment to democratic government.

Signs that this was coming have been apparent for decades. In 1980, Paul Weyrich, an influential conservative activist and co-founder of the Heritage Foundation, flatly declared, “As a matter of fact, our leverage in the elections quite candidly goes up as the voting populace goes down.” Few Republican politicians were so straightforward. More typical was their presidential standard-bearer that year, Ronald Reagan, who gave his infamous “states’ rights” campaign speech at the Neshoba County Fair, outside Philadelphia, Mississippi, where three civil-rights activists were brutally murdered in 1964—a grotesque gesture of antagonism toward multiracial democracy. The situation escalated from rhetoric to reality by the time George W. Bush won the presidency in 2000, despite losing the popular vote. It took a Republican-majority Supreme Court halting a recount in Florida for him to prevail in the Electoral College. Still, that election was close enough that those who wanted to could convince themselves that everything was fine.

The Republican Party’s deepest commitments are devotion to minority rule and reliance upon the anti-democratic features of the U.S. Constitution.
sharetweet

That is no longer possible. In October, with the election just weeks away, Sen. Mike Lee, a Republican from Utah and former clerk for Chief Justice John Roberts, announced, “We’re not a democracy.” Only a few days before, the Republican candidate for governor in Washington, Loren Culp, had gone further: “The problem with democracy—you can look at quotes from famous Chinese leaders like Mao, Gorbachev—they loved democracy because democracy is a step toward socialism, which is a step towards communism.” These are not merely the eccentric opinions of a few outliers. They reflect the Republican Party’s deepest commitments—most of all, their devotion to minority rule and reliance upon the anti-democratic features of the U.S. Constitution.

Since 1992, Republican candidates for president have won the popular vote just once. Donald Trump received about 3 million fewer votes than Hillary Clinton in 2016, and was elected through the narrowest of paths afforded by the Electoral College. Republicans likewise depend on their advantage in the Senate, which grants the same representation to California’s nearly 40 million residents as it does to the half-million people living in Wyoming. That imbalance is likely to grow: as the Washington Post pointed out, by 2040 70 percent of Americans will live in the fifteen most populous states, leaving them to be represented by just thirty senators. In a different era, that might have mattered less. But as a New York Times report underscored, “[U]rban-rural polarization has become particularly acute in America: particularly entrenched, particularly hostile, particularly lopsided in its consequences.” A party that draws much of its support from urban voters, as Democrats do, will regularly lose elections and see its political power diminished even if it earns significantly more votes.

Despite benefiting from these structural biases, Republicans seem aware that a shrinking base of aging white voters threatens their prospects, especially as the United States hurtles toward becoming a majority-minority country. They have responded by shortening the deadline for the 2020 census, and petitioning the Supreme Court to keep undocumented immigrants from being included in its count. (The Fourteenth Amendment requires that congressional seats be apportioned by “counting the whole number of persons in each State.”) They’ve purged tens of thousands of Americans from voter rolls. They’ve reduced the number of polling places, often in areas where racial and ethnic minorities predominate. They’ve tried to hobble the U.S. Postal Service’s ability to deliver mail-in ballots. And they’re not done: just weeks ago, the Republican governor of Texas ordered the number of ballot drop boxes be limited to one per county, whether Harris County (population 5 million) or Loving County (population 169).

But even if Democrats sweep this year’s elections, Republicans have a final line of defense: the Supreme Court. By stacking the least democratic branch of our government with right-wing justices, they’ll be able to undermine progressive legislation for decades to come. Consider Amy Coney Barrett: a justice nominated by a president who lost the popular vote—and confirmed by Senate Republicans who represent 11 million fewer people than their Democratic counterparts—could still be thwarting majorities when today’s youngest voters are well into middle age.

If Democrats take both the presidency and the Senate, one of their most urgent tasks will be to address the democratic deficit in our political system. Every remedy should be on the table: expanding the Supreme Court or limiting its jurisdiction, granting statehood to the District of Columbia and Puerto Rico, a robust package of voting-rights reforms, and eliminating the filibuster. In this case, what’s good for Democrats is also good for democracy.