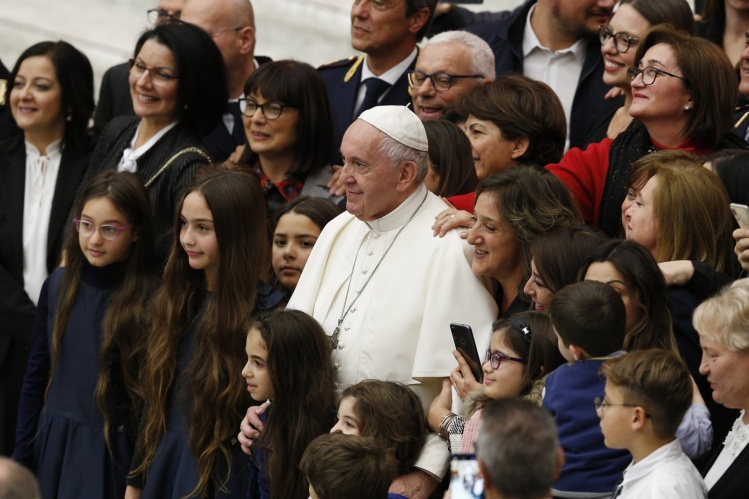 Pope Francis poses with a group during his general audience in Paul VI hall at the Vatican, December 11, 2019. (CNS Photo / Paul Haring)

Figuring out just what’s going on with Catholics in the United States is a complex task. How significant is the increasing, if still relatively small, number of young men and women drawn to more traditional forms of religious life? What is the real impact of Nuns on the Bus, and does the ministry challenge or reinforce stereotypes? What about the persistent vitality of Marian devotion, from the streets of Little Italy to the Vietnamese Americans gathered in the fields of Carthage, Missouri, to the Guadalupe processions in Brownsville? The total number of U.S. Catholics keeps going up, so why are the rates of baptism and marriage falling?

The ongoing sex-abuse crisis in the church looms over all this, of course, and further complicates matters. Is the drip-drip-drip of sexual abuse and clerical cover-up the reason going to Mass or staying involved with the church now seems optional for so many—or were these revelations simply what pushed away for good those who already had one foot out the door?

These questions provide the backdrop to the one posed in the title of a recent book by Thomas Sweetser, SJ, Can Francis Change the Church? It’s a slightly misleading way to frame what Sweetser is up to, suggesting that the pope might be able to bend a sprawling global church to his will. But Francis seems to know that’s not the case, as when he invoked John XXIII’s oft-cited motto in an interview he gave not long after becoming pope: “See everything; turn a blind eye to much; correct a little.” Instead, Francis’s real impact on U.S. Catholics, as Sweetser shows in a series of interviews, has more to do with the style of his papacy; indeed, the book’s subtitle, How American Catholics Are Responding to His Leadership, is closer to its actual focus.

For many Catholics, especially those committed to the church but conflicted about it, the figure of “Pope Francis” has emerged as a beacon. He radiates an authentic and humble faith, and his compassionate face and emphasis on mercy serve as the ultimate counter-narrative for an institution that, in the public mind, seems to be mired in outmoded thinking, hypocrisy, and even bigotry. But even here the “response” of the faithful is not due to Francis’s decisions as pope, such as who he appointed to key positions or what institutional reforms he’s executed; little of that is followed closely by those in the pews. They are responding to his image and message, communicated via social media and television to an interconnected world.

Francis was seriously considered for the papacy during the 2005 conclave that elected Benedict XVI, giving him time to think about the job and strategize his approach. His first gestures as pope—setting aside the trappings that usually accompany the assumption of the office and asking the assembled crowd to pray for him—were tailor-made for a media hungry to understand a figure little known to U.S. Catholics. It takes nothing away from his sincerity to recognize that these gestures had to have been planned in advance. They were not so much a renunciation of power as a new way of assuming it. To the extent Francis is trying to change the church, he is doing so by modeling a much more humble “way of proceeding,” one that begins with the Gospel.

Has it made a difference among U.S. Catholics? Sweetser tries to provide an answer by reporting on a series of in-depth interviews he did with fifty-five Catholic adults: first in 2011–2012; then again in 2017, four years after Francis’s 2013 election; and finally a short follow-up in 2018 given the re-emergence of the sex-abuse crisis. These Catholics were asked to reflect on their faith, selecting one of six themes to organize their response: “authority, liturgy, women’s issues, sexuality, justice, spirituality or parish life.”

The selection process, which drew on Sweetser’s own contacts with parishion-ers, resulted in a fairly “inside” group. The core of this group is made up of the types of people who are adult-education regulars at many lively parishes in the Northeast or Midwest, but it is not exactly representative of today’s diverse U.S. church. They tend to be older, white, college-educated, and middle-class. Several work, or have worked, for the church; with few exceptions they have served as teachers, parish staff, or pastoral ministers, as spiritual directors, former priests, or religious. They also tend to be mainstream-to-liberal Catholics and even former Catholics. Sweetser recognizes that there were few traditionalists among them.

Perhaps the question is not whether Francis can change the church, but if we can.
sharetweet

On the one hand, as a skilled pastor and longtime observer of parish life, Sweetser is well positioned to hear these voices. The dynamics of these conversations are familiar to him, and his task is to lift up what he has heard and present it in a useful way. He portrays his interlocutors in a sympathetic manner, often describing them as “intelligent” or “thoughtful.”

Sweetser’s approach, however, left this reader fidgety after a few entries, wishing he would press his friends a bit. He treats the process more as an election-season focus group than a searching conversation with adult Catholics: there are no targeted follow-up questions, no hints that an observation might be shortsighted or unfair, overly generous or ill-informed. Statements that could be challenged or more carefully parsed—“the unjust way women are treated in the Church”—are simply recorded. It made me wish for the “outtakes” from these sessions, the more direct exchanges that would happen in a genuine dialogue.

Which points to a broader question: the survey framework itself. The average adult in the pew may not be thinking according to the themes Sweetser chose. “Spirituality” would make sense to many, but “liturgy” as a concept (other than “going to Mass”) might not be all that clear. The more telling points seep in, then, around the edges: a deep sense of alienation from a rigid and uncaring institution (a defining moment for several interviewees is a change, with no parish input, from a beloved pastor to one perceived as distant and authoritarian); a generational disconnect from parish life; and moral revulsion at the pervasive hypocrisy of the clergy on human sexuality.

It is to these sensibilities that Pope Francis appeals. But will any of this make a difference, drawing people to the church either for the first time or the first time in a long time? It depends. One interesting observation from Sweetser points to a 2015 Pew Research Center survey that describes the U.S. population as 21 percent Catholic, 9 percent ex-Catholic, and 9 percent “cultural Catholic,” with another 8 percent having “other connections” to Catholicism. Rather than focusing on convincing ex-Catholics to return, he perceptively suggests that “cultural Catholics”—those raised as Catholic or married to a Catholic—are a group that might become more deeply engaged with, and committed to, the church during the Francis era. This insight recognizes the importance of social forces in these situations; it is unwise to hope for many static conversions. One of the hallmarks of those who remained affiliated with the church over the span of his own survey is a distinctly social affirmation: they are “proud to be Catholic.”

And yet. Even the claim “proud to be Catholic” is increasingly under stress as polarization continues to escalate in all areas of American life. Proud of what, exactly? The heroic work of Catholic sisters? The firing of gay teachers at Catholic high schools? The words and witness of Pope Francis have not been enough to bridge such divides in an increasingly politicized U.S. church. In a short chapter on parish life since Francis’s election, another dimension of this emerges: Francis’s impact is seen happening to “the church,” not the local parish. He might be offering a new vision for Catholics “at large,” but several respondents noted that this didn’t seem to matter in their own parishes. As one admitted, “The weird thing is that it has gotten worse.”

While Sweetser doesn’t solve this and other problems, his short, lively book is an ideal starting point for a thoughtful program of parish renewal. Many churchgoers will recognize their own questions and reservations, and symptoms evident in their own parishes. Even those working in places and with people not represented in Sweetser’s book will find much to consider. It makes this much clear: real solutions to the challenges facing the church will not come from “above,” but will have to emerge from the types of conversations that Sweetser had with parishioners. Perhaps the question is not whether Francis can change the church, but if we can.