How to Alienate Millennials from the Pro-Life Movement 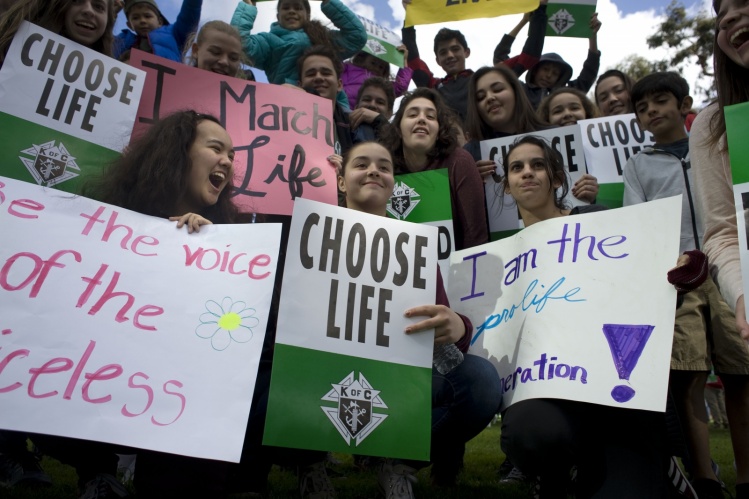 People participate in the annual Walk for Life in San Diego Janiary 20. The march was held in protest of the U.S. Supreme Court decision on Roe v. Wade to legalize abortion. (CNS photo/David Maung)

Polls in recent years have noted that millennials “are less supportive of legal abortion than their demographic profile would suggest,” as the Public Religion Research Institute put it in 2011. Such findings have given hope to the pro-life movement that the new generation could change the debate in time.

But a new poll from the same non-partisan organization now indicates otherwise.  Even though overall public opinion on the legality of abortion remains stable, opinions are shifting among adults aged eighteen to twenty-nine.

I will venture that this sharp shift is at least partly a reaction to the embrace that Christian conservatives and the allied pro-life movement have given to President Donald Trump in return for his pledge to appoint anti-abortion justices to the Supreme Court. The Trump connection is a sure turn-off for many millennials, who gave a majority of their votes to Hillary Clinton in the 2016 general election and whose views of Trump have grown more negative since then. (Trump’s approval rating among eighteen to twenty-nine-year-olds is just 25 percent, according to a poll the Institute of Politics at Harvard’s Kennedy School of Government released on April 11.)

The approach Pope Francis has urged would be much better for winning the hearts and minds of millennials, who are the future, as well as a significant force in public opinion right now. In his recent apostolic exhortation, Francis urged a passionate defense of the “innocent unborn,” and added, “equally sacred, however, are the lives of the poor, those already born, the destitute, the abandoned and the underprivileged, the vulnerable infirm and elderly exposed to covert euthanasia, the victims of human trafficking, new forms of slavery, and every form of rejection.”

Francis also rejected single-issue abortion politics, which have been pushed by influential segments of the U.S. Catholic Church
sharetweet

Many of these are causes that millennials share—an overriding concern for human rights and equality. Another great concern is human-induced global warming, which Francis addressed in his encyclical Laudato si’:

Since everything is interrelated, concern for the protection of nature is also incompatible with the justification of abortion. How can we genuinely teach the importance of concern for other vulnerable beings, however troublesome or inconvenient they may be, if we fail to protect a human embryo, even when its presence is uncomfortable and creates difficulties?

It’s a good argument to make to millennials, but it can’t be advanced by those who deny climate change. Francis also rejected single-issue abortion politics, which have been pushed by influential segments of the U.S. Catholic Church, saying that other concerns such as immigration should not be treated as secondary. It’s a debate that just goes on and on, but PRRI poll data indicate that relatively few people vote on abortion alone. According to PRRI:

Few Americans say abortion is a litmus test in their vote for candidates for major offices, but most say it’s at least one among many important factors. Eighteen percent of Americans say they would only vote for a candidate who shares their views on abortion. About half (47%) say they would consider a candidate’s position on the issue as one of many important factors. Fewer than one-third (31%) say abortion is not a major issue in how they decide to vote.

Robert P. Jones, chief executive officer of PRRI, said the poll found that the gap in the abortion views of young adults and seniors had doubled in four years.  In 2014, 57 percent of adults aged eighteen to twenty-nine supported abortion rights in all or most cases, as did 50 percent of those aged sixty-five or more. That seven-point difference doubled in the current survey.

This may tie in with religious affiliation. According to Jones, 46 percent of young adults are unaffiliated, while just 15 percent of seniors are. PRRI data indicate that among adults who switched views on abortion in the past five years, “nones” are by far the most likely to have become more supportive of abortion rights.

And yet, the most persuasive pro-life voice I’ve ever encountered was an atheist, the late Village Voice columnist Nat Hentoff. He made his case based on the civil liberties he so passionately and consistently advocated. Hentoff said he was moved after hearing Cardinal Joseph Bernardin speak about the “seamless garment,” later called the “consistent ethic of life.” He called it the “indivisibility of life”—which sounds like a good summary of Pope Francis’s exhortation.