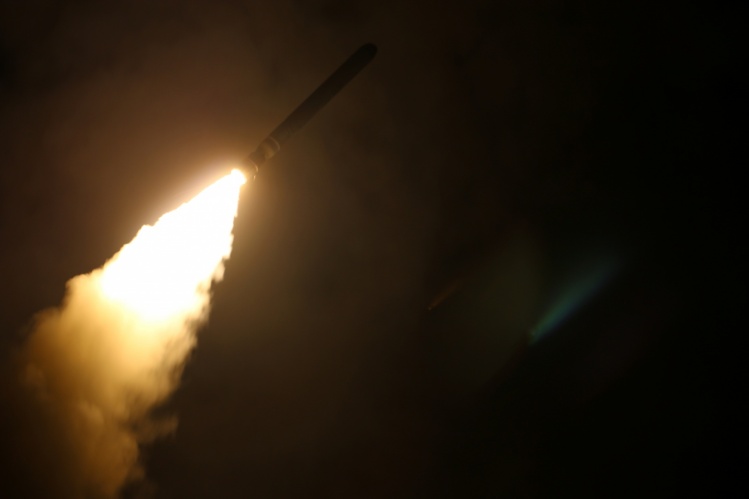 On Saturday morning, April 14, President Donald Trump took to Twitter to share his evaluation of the airstrikes that the U.S. military, along with the armed forces of France and the United Kingdom, carried out against Syria the previous night. He called the bombings “perfectly executed” and judged that they “could not have had a better result,” then ended with a triumphant proclamation: “Mission Accomplished!”

It is fitting that Trump reached for a George W. Bush–era slogan synonymous with premature claims of victory and strategic incoherence in the Middle East. It is not clear what was actually accomplished by this latest intervention in the Syrian civil war, now in its eighth year. In his speech to the nation announcing the airstrikes, Trump justified them by pointing to Bashar al-Assad’s use of chemical weapons against innocent civilians in Douma on April 7. Such weapons, he argued, “are uniquely dangerous, not only because they inflict gruesome suffering, but because even small amounts can unleash widespread devastation.” In response, Trump ordered “precision strikes” against Assad’s chemical-weapons facilities, hoping “to establish a strong deterrent” against the future production and use of such weapons.

Just over a year ago Trump bombed a Syrian airfield, and for precisely the same reasons. Clearly, this served as no deterrent, either to the most recent chemical attack or others Assad is believed to have carried out, including two in January involving chlorine. The use of chemical weapons is a heinous crime banned by international conventions, but such weapons are not going to be dismantled through sporadic airstrikes signaled days in advance. U.S. Lieutenant General Kenneth McKenzie seemed to admit as much while briefing reporters about the operation. “We believe that by hitting Barzeh, in particular, we’ve attacked the heart of the Syrian chemicals weapon program,” he said. But that statement tells us nothing about just what was destroyed, or what capabilities Assad retains.

It’s also clear that the administration has no broader strategy for how to deal with Syria.
sharetweet

It’s also clear that the administration has no broader strategy for how to deal with Syria. “We are prepared to sustain this response until the Syrian regime stops its use of prohibited chemical agents,” Trump said—an open-ended commitment that, depending on Assad’s behavior, could mean the rapid escalation of U.S. attacks on that country. In the days after the strikes, French President Emmanuel Macron said that he had convinced Trump not to withdraw U.S. troops from Syria and instead commit them for the “long term.” The White House countered that the president “wants U.S. forces to come home as quickly as possible,” prompting Macron to “clarify” his claim. Given Trump’s capriciousness and penchant for telling people what they want to hear, it’s hard to know just what passed between them, or what the plan is. The administration has also sent conflicting signals on whether the U.S. will place additional sanctions on Russia for its support of Assad.

This muddled approach also underscores the need for Congress to reassert its role in determining how, when, and why the United States goes to war. Any sustained military action requires congressional authorization, a point Trump ignored when he signaled his openness to continue bombing Syria. A debate in Congress would allow lawmakers to determine if the U.S. military should be engaged in attacks on the Assad regime at all and, if so, take part in developing a comprehensive strategy with clearly defined limits and goals. The sweeping 2001 authorization for use of military force, which has no expiration date, has been stretched for years to allow strikes against ISIS on the grounds that ISIS is related to al-Qaeda. The bombing of sites controlled by Assad is a clear step beyond that, and given the risks of triggering conflict with Russia or Iran, decisions about using force cannot be made on the whims of the president, this one in particular. “Hopefully some day we’ll get along with Russia, and maybe even Iran—but maybe not,” Trump said in a typical flourish during his speech to the nation. To leave such weighty matters solely in the hands of such a petulant man is a grave error.

When brutal dictators like Assad commit atrocities, the instinct to do something is understandable. But as the record of the United States in the Middle East over the past decade and a half shows, intervention is often unwise. The temporary salve to consciences that comes from taking action is not worth the risk of getting further drawn into a civil war that the United States has little chance of bringing to a just conclusion. Yes, the international community must act to deter the use of chemical weapons. There is little evidence, however, that yet another “one-off” flurry of missiles will accomplish that goal.