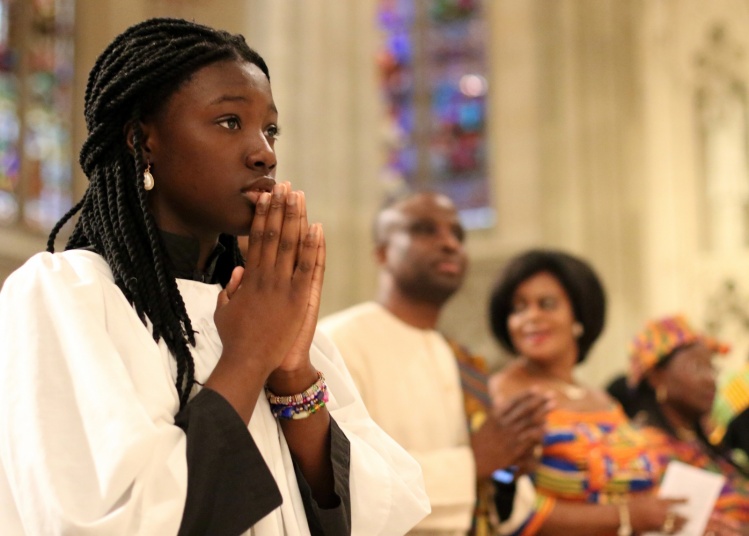 An altar server processes toward the sanctuary at the beginning of the annual Black History Month Mass at St. Patrick’s Cathedral in New York City February 4. (CNS photo/Gregory A. Shemitz)

“A trend is accelerating rapidly at Catholic New York: that of blatant favoritism towards Latinos and blacks in the Archdiocese of New York.” That was the opening sentence of a letter published in our diocesan newspaper last December, under the bland heading “Publishing ‘Trend.’” The author’s evidence of favoritism was a handful of recent articles that covered the activities of nonwhite Catholics, as well as a national news item in which a bishop described Hispanic immigrants as “our brothers and sisters.” The letter concluded by asking, “Considering that the majority of issues of CNY over the past few years have published some element of this favoritism, why should any self-respecting white person belong to the Archdiocese of New York?”

Just to be clear: the letter’s author is objecting to any attention paid to nonwhite people as an affront to whites. The name for this point of view is white supremacy. It is a dangerous ideology in open violation of church teaching. It is also enjoying renewed prominence in this country, thanks to support from the Trump administration. And there it was being advocated bluntly in the letters column of “America’s Largest Catholic Newspaper.” There was a companion letter, too, which complained that “racism” is an overused term too often deployed “by liberal Democrats and their minority supporters” to silence conservatives. You have to wonder whether that writer realized the other letter proved him wrong.

Even the guy who wrote the white-supremacist letter knew it shouldn’t have seen the light. “I’m still shocked (pleasantly, I might add) that my letter on the blatant favoritism towards Latinos and blacks was printed,” he boasted in January on the white-nationalist website VDARE, providing a link to CNY as proof.

If he was shocked, imagine how Catholics of color felt when they saw it. How did it feel to open the paper that tells them what’s going on in the diocese and read such a calm and confident message of hate?

I wrote my own letter to object, and it was published in the next issue, along with two others like it—and another in the issue after that from an Ohio priest who offered a clear-eyed explanation of “racism as a structural, systemic reality.” But it took six weeks for the paper to offer its own response. Up to that point, the letter promoting racism, the one insisting racism is overblown, and the letters denouncing those two were all put forth on equal footing, all perspectives to consider. Is the Catholic Church only for white people? Our readers share their thoughts!

Is the Catholic Church only for white people? Our readers share their thoughts!
sharetweet

In the January 18 issue, a letter from a black Catholic in the archdiocese asked for an explanation of how and why those two December 7 letters made it to print. It was followed by an embarrassingly inadequate response from CNY editor-in-chief John Woods. The paper had received three letters, he said, after it reported that two Harlem parishes had collaborated on a Declaration Against Racism. Two of those letters, he conceded, were “flawed,” while “the third was unsuitable for publication.” But of course, the whole point is that the letter on behalf of “self-respecting white Catholics” was also unsuitable for publication. “We often include letters about our reporting, both positive and negative,” Woods added, as though there’s some virtue in providing a forum for complaints founded in straightforward racism.

The whole episode forced me to ask who Catholic New York is really meant for—all the baptized in the archdiocese, or just the crankier white conservatives? Consider the letter in the March 29 issue sneering at parents who “want to be the first ones on the block with a transgender kid.” It went on at length in that vein, all contempt and insults, another Catholic reader’s opinion about those awful other people.

My pastor often encourages us to reach out to our neighbors and invite them to church with us. Sometimes I feel guilty that I don’t do more evangelizing. And then I see ugliness like that in the paper filled with pictures of the bishop and wonder, how could I explain all this to a visitor? Yes, we have the Eucharist, and we also have lively debates about whether other people deserve respect! I could insist that, when it matters, the church can be counted on to stand with the vulnerable and marginalized. I could explain that well-formed Catholics in the Trump era know how to identify and root out hatred. But when evidence to the contrary is there in the vestibule, stacked right next to the parish bulletins, what self-respecting person would be convinced?