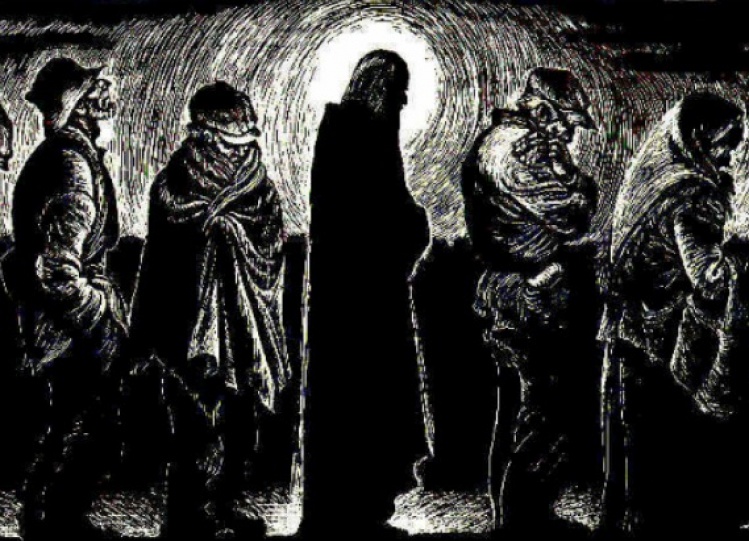 In the Middle Ages when one out of every four was leprous, there were two thousand leper houses run by religious in France alone. This is the startling and thought-provoking statement made in John Farrow's book Damien the Leper. That statement has not been contested. It may be horrifying to make such a comparison, but inasmuch as one out of every five workers today is unemployed or on work relief, the catastrophe which has visited us is comparable.

Unemployment is the gravest problem in the country today. It is immediate, so it is more pressing than the problem of war and peace. It means hunger and cold and sickness right now, so it is more immediate a problem than the unionizing of workers. In fact the unionizing of workers cannot get on while thirteen million men are unemployed and those employed are hanging on to their jobs like grim death and not willing to make any forward steps which would jeopardize those jobs. And we contend that the kind of shelter afforded these unattached unemployed is liable to make them leprous in soul and utterly incapable of working for sustenance or salvation.

There are thousands of men sheltered in the lodging houses of New York City, run by the city, and countless other thousands sitting up all night in missions and flop houses and roaming the streets. As the weather gets warmer you may see them sleeping in the shelter of buildings, in areaways, in subways, along the waterfront. They crawl into their holes by night, and by day come out to tramp from one end of the island to the other in search of food. Every other city—Pittsburgh, Boston, Detroit, Chicago, Milwaukee, St. Louis—has the same problem.

Peter Maurin, whose idea it was to start the Catholic Worker, began it with a simple program which called for round-table discussions, houses of hospitality, and farming communes. Before the depression, he predicted it. During the depression he constantly stressed the problem of unemployment. He is still journeying from one end of the country to the other, speaking of a new social order wherein man is human to man and which can be built up on the foundation of the works of mercy and voluntary poverty.

He himself has been a transient worker and an unemployed worker. He spent twenty years traveling through the United States and Canada, doing the manual labor which built this country. And it is due to his constant indoctrinating, as he calls it, that groups in New York, Boston, Pittsburgh, Chicago, Detroit, Milwaukee, Troy, St. Louis, Houma, Louisiana, and Windsor, Ontario, have started what Peter himself called from the beginning houses of hospitality, where those in need can receive food, clothing and shelter, and hold round table discussions, which point to the solution of problems. Peter is only doing what the great Saint Peter called for—working for a new heaven and a new earth, wherein justice dwelleth.

In New York, the unemployed come from all over, seeking work. They are not all single men. There are the married, as well as the sons of the family who leave home in order that they may not be a burden on those that remain. There are whole families migrating. There are young married couples. There are even lone women and girls.

Peter has always pointed out that according to canon law, all bishops should be running hospices, or houses of hospitality. But now, thinking in terms of state responsibility rather than personal responsibility, those in need are turned over to agencies, to the city or the state. There are isolated instances of hospices of the homeless of course. I have visited Father Dempsey's huge hospice in St. Louis, for instance. Father Dempsey was criticized for "bringing all the bums in the United States to St. Louis." But nevertheless his work was well supported and he was able to carry on his work for many, many years. There is a splendid hospice run by the St. Vincent de Paul Society in San Francisco, where a small charge of fifteen cents is made. There is a day shelter besides where men can remain during inclement weather. We believe of course that an absolutely free place is necessary for the wanderer not having any funds or not knowing the ropes. I have heard of a hospice in Philadelphia which I wish to visit, and doubtless there are many more. I hope readers of this article will let me know of others throughout the country, run under Catholic auspices.

I have visited all the hospices run by Catholic Worker groups, naturally, and they all have the same difficulties and the same problems and are all run on the same lines. They all started with no funds at all. A small group got together, decided they wanted a headquarters for propaganda and meetings, and rented a store for ten dollars or fifteen dollars a month. None of them ever knew where the next month's rent was coming from. Usually there was no money for paint or soap or mops or beds or stoves or cups. But little by little these things were contributed. Most of them began fearfully and are continuing fearfully. If any of them ever thought they were going to have to feed the numbers they are feeding, they would never have had the courage to start. (Oh, we of little faith!) Most of them hesitated along for several years before starting the endless task of feeding those who came. For as soon as the feeding began—as soon as the mood of hospitality began to make itself felt—lines formed at the door, and continued day after day.

In New York, our breakfast line, which began with a single friendly pot of coffee on the stove in the store where we hold our meetings, grew and grew until now we serve breakfast to approximately 1,000 men. They begin forming on the line at four-thirty in the morning. The door is not opened until six and then the work goes on until nine or nine thirty. During the day we have only sixty or so to the other two meals. We have to consider the work of the paper, letter writing, receiving visitors, taking care of those under our roof which number about fifty in the city and fifteen in the country. (In the summer there will be about fifty there too.)

In Boston they feed 250 men a day; in Pittsburgh 200; in Detroit, 400; St. Louis, 200; and so on. The numbers are not so large, but if the reader will just contemplate saying to himself, "Two or three friends and I will undertake to feed 350 people a meal every day," not just for one day but indefinitely, stretching out month after month, year after year, he would be aghast. Just try it. He would not think it possible by himself of course, nor would he trust the Lord to fall in with his seemingly presumptuous plans.

It is really the work of the lay apostolate. In this day of huge parishes, running into thousands of souls (sometimes even 10,000) it is hard to see how the priest can think of undertaking such a work. Bishops used to have personal knowledge and acquaintance with not only all their priests but many of their flock, whereas now the bishop of a large diocese has every moment taken with spiritual duties.

We not only believe that this is the work of the lay apostolate, but we believe that all over the country the faithful should gird up their loins, so to speak, and start two thousand houses. If France could start and continue for a few generations two thousand leper houses, until segregation, combined with the plague, wiped out leprosy, then surely we in the United States ought to be able to open and continue two thousand houses of hospitality and face the prospect of continuing them not only through this generation but until the social order has been reconstructed.

It is a grave emergency. The Holy Father says that the workers of the world are being lost to the Church. If we are all lay apostles and "other Christs" this is our responsibility.

Trade union leaders like John L. Lewis believe that through strong unions, labor leaders in politics, legislation, the thirty-hour week, insurance, taxation, and public works financed through taxation of industrialists rather than of the poor through sales taxes, the unemployed can be re­absorbed and those not reabsorbed can be taken care of.

Perhaps a Christian state could do all these things. But since we are living under only a nominally Christian state, Christians will have to resort to those old-as-the-Church itself methods of the works of mercy through houses of hospitality to care for immediate needs such as food, clothing and shelter.

These needs supplied under Christian auspices would make a startling change in the character of the unemployed. Hope, that most sinned-against of virtues would be restored. Hospices in the shadow of churches would mean a constant recognition of Christ the Worker, Christ our Brother. The priests living in close contact with the poorest of transients and ministering to them, holy Mass, missions, constant indoctrination through Catholic literature, Catholic surroundings—what a change this would make in the outlook of the poor!

As it is now, under the dubious hospitality of the city and state, it is as though God were unknown. There is no reminder to morning and evening prayer. Men have lost the sense of their own dignity, that dignity which they possess because Christ shared their humanity, their unemployment, their dire need.

Worse than that, men become drunken, drug-­ridden, vicious, and obscene in many cases. These are strong words but when one thinks what mobs are capable of, once their passions are aroused, it must be admitted that in our care for the poor we do nothing to give man the power to control his baser nature which through its black deeds most assuredly merits the hell which Christ died to save us from.

Who are most prominent in caring for transients and unemployed throughout the country? The Workers Alliance with its millions of members is strictly Marxist and materialist in its philosophy, however unformulated. There amongst those masses is the material for revolutionary mobs, and when we consider revolutions in the past, engineered by the few intellectual leaders with a theory of revolution as Lenin called it, when we consider the mass riots in New York in the last century which led to the building of our many armories, we can count on a well-directed mob throughout the country under the influence of whatever Marxist leaders or Fascist leaders that turn up in the future.