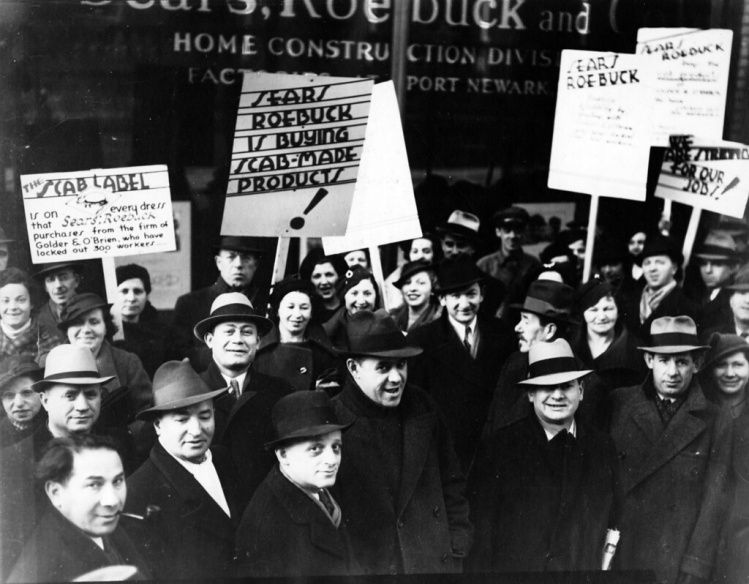 Beelzebub viewing from afar the alarms and excursions of capital and labor in the United States today, might well be tempted to echo the words of Léon Bloy: “Gentlemen, you are every one of you possessed.” However, what we have been witnessing recently at Youngstown, Ohio, and other places is not a form of demoniac possession. It is simply the winding up of the Manchester School of economics. It means that we have finally reached an epoch in our industrial affairs when the persistent determination not to apply the eternal truths to the temporal order is having its effects exactly where they might be expected—in the temporal order.

Just as the symmetry of the human frame is the result of the suitable arrangement of the different parts of the body...so it is ordained by nature that these two classes [capitalists and laborers] should dwell in harmony and agreement.

When the Pope made this statement he was neither talking the language of Adam Smith nor was he setting forth an abstraction of the speculative intellect. He was affirming rather a truth of the practical reason, having to do with prudence whose domain is the “multitude of our necessities, circumstances and occupations.” So also in expounding this great text in the charter of social justice, one might almost believe that the author of “Rerum Novarum” was granted a prophetic vision of industrial America today.

And, in fact, if we turn to the turn of the practical and temporal where, due to our neglect, the divine prudence seems to have more than the ordinary “savor of human misery” clinging to her garments, what do we find? We find Mr. John L. Lewis determined to regiment American labor along the lines of his Committee for Industrial Organization. We find capital, as represented by certain automobile and steel companies, determined to thwart, hamstring and hamper the unity which Mr. Lewis seeks for labor.

Mr. Lewis, speaking for what he conceives to be the rights of labor in futuro as well as in esse, wants his organization, the C.I.O., to be the sole bargaining agency with the owners of the mass production industries. Mr. Alfred Sloan and Mr. Walter P. Chrysler, and latterly and most intolerantly, Mr. Henry Ford and Mr. Tom Girdler, speaking for capital, have insisted on the right of the individual to labor without the obligation of joining Mr. Lewis’s unions or any other union. For these gentlemen take the position which was succinctly described by Time, issue of January 18:

...that it is the business of management to manage the business, of labor to labor; that there can be no confusion of functions.

Thus the issues are clearly defined but it is also, and unfortunately, clear that a great labor crisis is upon us. The more recent conflicts as well as the preliminary skirmishes last winter have what might be called a definite residual value. They are, as it were, determinants, not only of two opposing theories, but of two goals as far apart as the East is from the West.

The nineteenth-century economists were inclined to deal with labor as a “commodity” because they held the question of wages to be all important. Leo XIII is of a different opinion. Assuming first the existence of a “dictate of natural justice more imperious and ancient than any bargain between man and man,” he tells us that “the remuneration must be enough to support the wage earner in frugal and reasonable comfort.” But he adds: “Before deciding whether wages are fair, many things have to be considered.” Developing this thought, he reaches the following conclusion:

Labor is not a mere chattel, since the human dignity of the laborer must be recognized in it.

Now it is interesting to note that the paramount issue in the present labor crisis is not the question of wages but the principle of “collective bargaining.” Can it be, then, that in this much-discussed issue there resides a still deeper problem—a problem which has to do with that very human dignity of the laborer upon which Leo XIII places the greatest possible emphasis, because, as he says in another imperishable sentence, “God Himself treats it with the greatest reverence”? It would appear to be so.

Most of us know the texts in which Leo XIII and Pius XI have justified collective bargaining for laborers. And certainly for many, these papal pronouncements will be sufficient to indicate an immediate decision on the rights of labor in the present welter of claim and counterclaim. Thus that stout-hearted little paper, the Catholic Worker, declared itself three months before the Supreme Court found the Wagner Labor Relations Act constitutional:

The strikers [in the General Motors Strike] demand that they be regarded as the sole bargaining agency for the G.M. workers. On the face of it, this would seem to be depriving the non-members of the right of collective bargaining. The argument, however, does not hold, as the non-members refuse either to form a union of their own or join the C.I.O. By refusing to do their duty by their fellow workers, by refusing to heed the Pope’s admonition that workingmen form associations for their mutual protection, they do grave injustice to their fellow workers and to society, and it would seem that by their inaction, they reject the right to collective bargaining and that the group that upholds the right should gain it.

While agreeing in general with this courageously expressed opinion, I would cut a little deeper if only to affirm more explicitly that collective bargaining is not a “contractual” right which can be forfeited at will. The truth is that, properly speaking, I am not dealing here with “contract” at all but with “status”—a very different thing.

The bond between workingmen which has produced labor unions has its origin in the social character of labor. And the extension of this bond to include dealings with employers or “collective bargaining” is simply the reaffirmation of the “human dignity” of the laborer in its corporate or community aspect. Leo XIII makes it very clear that it is the duty of labor to be “united in mutual harmony,” which is another way of saying that it is the duty of labor to uphold the dignity of the individual workman by establishing an organic unity among its members. This organic unity should be, as Pius XI says, “in a true sense autonomous.”

With this word “autonomous” which Pius XI emphasizes with fearless precision, we reach at once the heart of the labor controversy in the United States. For Mr. Lewis wants labor to be organic and “in a true sense autonomous.” The great mass-production industrialists, particularly Messrs. Ford and Girdler, insist on labor’s “atomic” character. Having this in mind, certain operations of the C.I.O. take on a meaning that is highly significant in spite of the vilification that has been heaped upon them by the conservative press.

Without going into the legality of the “sit-down” strike, it is still evident to every student of modern industrial economics that such a technique could not be applied effectively except where management had, for its own private purposes, made labor “atomic.” The “sit-down” strike is only possible in industries so thoroughly organized for mass production that the work of vast numbers of men is carried on at the sub-human level of the automaton. That the union-enforced idleness of a relatively few key men could paralyze a giant corporation is ample evidence of what sort of labor was expected of tile majority of nonunion robots stationed along the assembly lines.

No wonder that capital fears, hates and mortally detests Mr. Lewis. He has struck a heavy blow at the system which American industry held sacred--the system of “scientific management.” This is the system that demands that the management do all the organizing and the workman do all the toiling. And this is the reason for the uproar made by Mr. Girdler and others along steel’s “united front.” The mass producer wants the open shop because such a system makes him, to a large extent independent of organized labor—that is, if he can keep people like Mr. John L. Lewis out of his hair. Now the technique of the C.I.O. exactly meets and neutralizes the technique of modern mass production. There is logic, if not legality, in Mr. Lewis’s tactics.

But what of the “atomic” workmen in the great majority of “independent” mass production industries—the workmen who are not members of any union, who refuse to join any union and whose only desire, as Mr. Russell Porter tells us, “is to get back on the job”?

Of these I can say, with Josiah Royce, that they are truly “self-estranged” workmen whose community consciousness has been broken down “in the service of masters too powerful to resist and too complex in their undertakings to understand.” Or I can say, as a famous French sociologist said of a similar group: “Ils sont infériorisés, parce qu’ils se sentent infériorisés.” Has not Hilaire Belloc pointed out that in our modern system the majority of workmen are only too anxious to be exploited, that the lament of the unemployed laborer is, “Woe is me for I have no one who is willing to exploit me”?

The melancholy truth is that these are the men whose “inferiorization” at the hands of an inhuman system has been so complete that they reject a right because it is also a responsibility. Their condition is clearly described by Saint Thomas Aquinas in his definition of servitude:

That person is in servitude who finds himself under the government of another for the private utility of the latter and not for the sake of the good of the servitor himself or for tile common good [“Summa Theologicae,” I, 96, 4].

But it will be enough for me to say that these men constitute the main objective of Mr. Lewis’s war with capital. For it is only by insisting on an all-inclusive corporate responsibility that labor can overcome the fatal individualism imposed upon it by mass production. This is simply to say that by some means or other the human dignity of the laborer must assert itself in its social aspect. It is to say that the economic society is a real part of the social order. Labor can no longer remain “half slave and half free.”