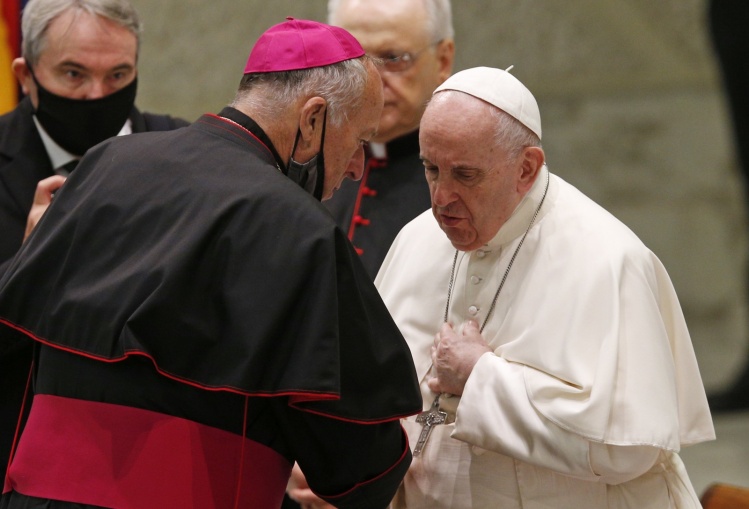 Several years ago, I attended a conference in Rome where a number of issues confronting the Catholic Church were examined by a roster of impressive speakers. It was my first and only visit to Rome and the Vatican. I didn’t get to the Colosseum but did visit the Pantheon and a number of other churches. The Caravaggios in the Church of San Luigi dei Francesi, just around the corner from the Pantheon, were a highlight. I’m sorry to say that the gigantism of St. Peter’s Basilica did not appeal to me. The nearby fortress of Castel Sant’Angelo—once the tomb of Emperor Hadrian, later a castle for popes and a prison for their adversaries and now a museum—had a certain Game of Thrones air to it. In any event, most of my time was spent at the conference, listening to and importuning some of those in attendance to write for Commonweal.

The presentations were made in a large lecture amphitheater that could accommodate several hundred. At the end of one session, I was sitting in a row of seats at the top of the room. Two men, standing a few feet behind me, were conducting an animated conversation. The subject was Pope Francis, and one of the men was expressing what seemed to be a very personal contempt for the pope. I was taken aback by the tone and vehemence of his complaints. As the conversation wound down, I took a surreptitious look at the two men as they began to walk off. I was surprised—indeed I was somewhat shocked—to recognize the pope’s detractor. He was a prominent conservative American bishop. As a journalist and editor who has written about internal Church strife for decades, perhaps I shouldn’t have been taken aback by what I heard, but I was. Conservative Catholics had for years berated critics of John Paul II and Benedict for disloyalty to the papacy. I took such criticism seriously and was careful that the things I wrote or published in Commonweal questioning the actions or judgment of the pope were not ad hominem attacks. I know bishops can be as sinful as the rest of us, but I guess I wanted to believe that, if disappointed by any particular pope, they would still honor the papacy itself.

I was reminded of this incident when reading a number of opinion pieces by conservative Catholics criticizing Pope Francis for elevating Bishop Robert McElroy of San Diego to the College of Cardinals. McElroy has been a strong advocate for Francis’s agenda, and in giving him the red hat Francis passed over several bishops in more prominent dioceses who have been less enthusiastic about his leadership. I don’t know why this should surprise or aggrieve other prelates. John Paul II and Benedict also made a practice of appointing like-minded bishops to the College of Cardinals and passing over those thought to be less enthused by their pontificates. One particularly overwrought response came from Thomas G. Weinandy, OFM Cap., formerly director of the USCCB’s Committee on Doctrine. Weinandy is one of Pope Francis’s most outspoken critics, having made public a letter he wrote to the pope in 2017 charging him with sowing confusion among the faithful. “To teach with such a seemingly intentional lack of clarity inevitably risks sinning against the Holy Spirit, the Spirit of truth,” he wrote. “The Holy Spirit is given to the Church, and particularly to yourself, to dispel error, not to foster it.” Weinandy defended his decision to make the letter public by saying he had received a sign from God that he should do so.

The clear suggestion here is that McElroy is somehow not a man of “authentic” Catholic faith.
sharetweet

Perhaps Weinandy believes he received another sign from God to launch his most recent salvo. In “The American Catholic Church: A Defense,” he bemoans the fact that José Gomez, archbishop of Los Angeles and president of the United States Conference of Catholic Bishops, was passed over for McElroy. Weinandy writes that Gomez is “esteemed” by his fellow bishops. “Moreover, he is a man of authentic Catholic faith, upholding the conciliar and magisterial teaching of the Church concerning faith and morals.” The clear suggestion here is that McElroy is somehow not a man of “authentic” Catholic faith, or at least not as much so as Gomez. Weinandy goes on to indict McElroy for being soft on abortion, favoring the ordination of women, and, like Francis, being ambiguous about the immorality of homosexual acts. McElroy, a “so-called ‘progressive’ bishop,” is “in league with the formidable liberal, and often anti-Catholic agenda active within mainstream American culture.” In choosing McElroy, Weinandy claims, Francis has “insulted” and “slighted” Gomez, the American hierarchy, and all Americans who are loyal to “their traditional Catholic faith.”

We are told that you will know Christians by how they love one another. I understand why some Catholics are disturbed by what Francis says and does. But if Weinandy’s screed is the product of a traditional Catholic faith, who would want any part of it? But maybe it shouldn’t surprise me as much as it does. This is the same man who argued not long ago that God allowed the pandemic to kill millions because “the world is of the mind that it can commit no evil that would merit God’s righteous judgment.”

Nothing I have read about McElroy leads me to believe that he possesses anything other than an orthodox Catholic faith. Bishops and cardinals disagree about a lot of things. It is my impression that Francis wants them, and all Catholics, to talk openly, honestly, and humbly about those disagreements. It is also my understanding that to “think with the Church” means to give magisterial teaching the benefit of the doubt, not subject it to a hermeneutic of suspicion. That said, why pretend Catholics are not honestly struggling when it comes to questions surrounding homosexuality, the ordination of women, or prudential judgments about abortion law? What I find unpersuasive in advocates on both sides of these disputes is thinking that the answers to these questions are all obvious and incontestable. I suspect that Francis’s popularity has much to do with the fact that he seems willing to listen before deciding.

To Weinandy’s point: yes, Francis can be vague or ambiguous, but vagueness and ambiguity have their prudential uses. (What Jesus had to say was not always immediately clear either.) And yes, on certain hot-button issues Francis’s tone and demeanor are markedly different from those of his predecessors. As the cliché goes, he is usually more pastoral than didactic. He is also determined, unlike John Paul II and Benedict, to decentralize hierarchical decision-making in the Church. Much to the consternation of Catholics like Weinandy, Francis is willing to bob and weave to get that done.