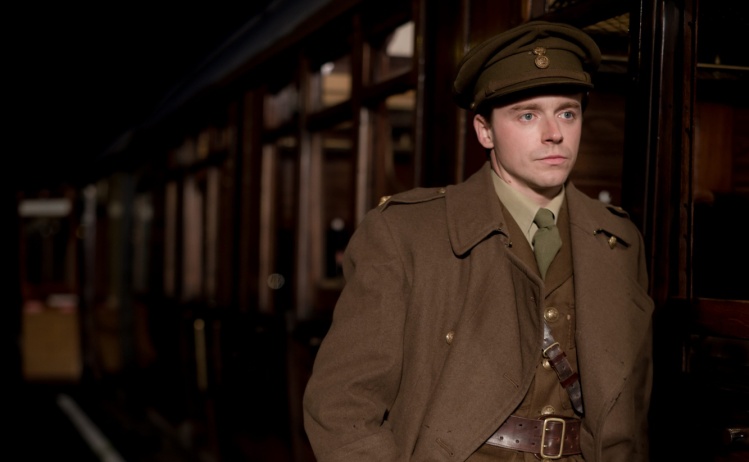 Terence Davies is haunted by the Fall. The veteran English filmmaker, whose new film, Benediction, is currently in theaters, has been a staunch atheist for most of his seventy-six years, but disappointment is everywhere in his filmography: disappointment with parents and lovers, siblings and spouses, art and politics, the Church and the world. Since the late 1970s, he has gradually perfected an art of loss and dashed expectations, where life is rarely as good as his characters feel it ought to be. Thank God that it is also beautiful.

Davies was born in 1945 to a devout working-class Catholic family in Liverpool. He left school at sixteen and the Church at twenty-two. He worked for ten years as a shipping clerk before attending a series of drama and film schools where he produced the three short films now called the Terence Davies Trilogy (currently streaming, along with six of his features, on the Criterion Channel). Shot on grainy black-and-white stock, the trilogy charts the story of Davies stand-in Robert Tucker as he progresses from a Catholic-schooled youth to a repressed middle age to, in the final installment, the director’s own imagined death. Each film slips freely between different times and places, juxtaposing Tucker’s life at various stages. In Death and Transfiguration, his own decrepitude is intercut with memories of his mother’s death; and in Madonna and Child, Davies, who is gay, charts a growing discomfort with the strictures of religion alongside an equal—and perhaps more painful—inability to express his sexuality in any of the forms available to him.

Davies adored his mother and feared his father, a violent martinet who died of cancer when the director was seven years old. His early films are filled with petty tyrants: fathers and husbands, bullies and schoolmasters, priests and doctors—all working to put his characters in their proper place. Distant Voices, Still Lives, his debut feature, tells the story of a working-class Liverpool family much like Davies’s own (though with three children rather than ten). The film has a rhapsodic quality, cutting freely between weddings and baby showers and childhood Christmases. Long sections are devoted to crowds singing together, expressing through song what they could never plainly say. Yet it returns again and again to scenes of primal violence, husbands beating wives and boys breaking windows and the many torments the father (played by Pete Postlethwaite) visits upon wife and children and neighborhood before dying, miserably, in the hospital.

In a recent interview, Davies described himself as “sick with happiness” during the four years following his own father’s death, before he went to boarding school and gained a whole new set of tormentors. This interval of bliss is portrayed in my favorite of his films, 1992’s The Long Day Closes. He assembles its narrative through a kind of collage, stitching together the experiences of a lonely young boy with minimal exposition, using associative cuts to guide the viewer from image to image.

The film leaps along from memory to memory: schooldays and churchgoing and the many hours spent with his mother, but especially the time he spent at the movies. Davies sets the film to a soundtrack of classical music, film scores, and dialogue from the movies of the 1950s that emphasize the movie-ness of what we’re watching, just as the film’s sets and artificial lighting seem to produce a recreation, rather than an ordinary depiction. It’s like a child’s idea of a film about childhood, and it operates like no other film I’ve seen. Yet even this seeming paradise comes with a dark tint, for boarding school is just around the corner, and the idyll of youth will soon be banished, replaced by the wilderness of adulthood.

The old battlefields are far from the bright ballrooms and well-appointed parlors of England’s upper class, but they are always present to Sassoon.
sharetweet

In the years since, Davies has worked almost entirely with other people’s stories. Only 2008’s documentary Of Time and the City has returned to his Liverpudlian childhood. Yet even in adaptations of The House of Mirth and The Deep Blue Sea, he has found himself.

This has been especially true in his biopics. Benediction tells the life story of the poet Siegfried Sassoon (Jack Lowden), an aristocratic son of a Jewish merchant family. The film begins in 1914, on the night that The Rite of Spring debuts in London. We hear Lowden’s voice reciting Sassoon’s poem “Concert Interpretation,” yet when the music fades and the curtain rises, it is to footage of the First World War. Again and again throughout his film Davies returns to these images of horror and carnage, using period footage to create a profound distancing effect: the war is over and the old battlefields are far from the bright ballrooms and well-appointed parlors of England’s upper class, but they are always present to Sassoon.

He had enlisted eagerly and fought valiantly, earning the Military Cross for saving a wounded man’s life. Yet his experiences in the trenches and the complacency he observed at home convinced him that the war was being prolonged only to shore up the self-image of a dying empire. In 1917, he refused to continue serving, a stand he wanted to take publicly. But this would have resulted in a court martial and possibly execution, and his rich and influential friends succeeded in having him declared unfit, saving his life and nullifying his protest in one go. Instead, he was sent to a convalescent home in Scotland to wait out the rest of the war, in silence.

Lowden plays Sassoon as an eager and open-hearted socialite, profoundly loyal and thus easily betrayed. In the hospital, Sassoon develops a close, possibly romantic bond with the young poet Wilfred Owen. Owen is eventually discharged and returns to service, only to die in the final days of the war. This is one of a series of primal wounds that will fester for the rest of Sassoon’s long life. Still ahead are years of witty repartee in luxurious drawing rooms, love affairs both frivolous and sincere, and Sassoon’s growing fame as a poet of the war, depicted by Davies with a gloss of high melodrama. As a pure period piece, Benediction has charm enough for twenty Downton Abbeys. Robbie Ross, Ivor Novello, and T. H. Lawrence all make appearances. And as a depiction of covert gay life in the era before decriminalization, Davies’s film easily outclasses others that cover the same ground. His favorite themes re-emerge: social repression, mothers and sons, how art and performance spur people through otherwise intolerable lives. It’s vintage Davies, on a more glamorous stage.

Early in the film, we see an aged Sassoon (played by Peter Capaldi), arguing with his son in a cathedral. He is considering a conversion to Catholicism, an idea his son regards as ridiculous, and which even the elder Sassoon seems incapable of explaining. The baptism itself is presented through a series of direct-to-camera dissolves, as if we in the audience were being baptized. At the scene’s climax, the camera zooms out to reveal Sassoon face down on the flags with his arms outspread, a mysterious cruciform image that may hint at the sense of suffering and sacrifice that drew him to the Church. The film soon cuts back to the younger, happier Sassoon played by Lowden, and religion is never discussed again. But the image remains, lurking like those occasional intrusions of battlefield footage behind the parties and pettiness.

Benediction is the story of a man’s profound disappointment with the world, which has not lived up to the sacrifices demanded of him. In the film’s final third, a jilted Sassoon decides to marry a woman, the poet and artist Hester Gatty, and settle into a more respectable kind of life. Their relationship seems happy enough, and the proposal has an effortless charm. Yet even with his wife’s love, the older Sassoon overflows with bitterness, resentful toward his middle-class life, his unfaithful lovers, his reputation as a minor poet, and a culture that he doesn’t understand and that made no attempt to understand him. He has been lashed again and again throughout his life, without redemption. Capaldi hunches and glares and speaks through tight lips, opening up only to shout at his son to turn down the music. The older Sassoon has closed himself off from the world to prevent it from disappointing him again. After a lifetime of betrayal, he can only look forward: to death, and to eternity.