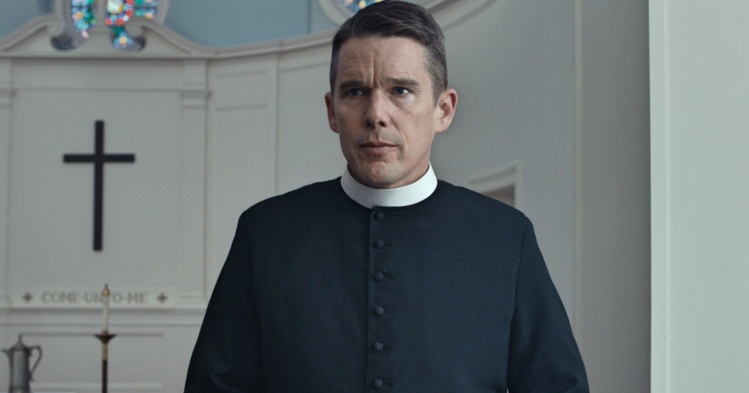 Delving into the spiritual crisis of a country parson, First Reformed strives to chart some shape of redemption on a grid of grief, illness, and humiliation. For Rev. Ernst Toller (Ethan Hawke), grief—and guilt—spring from the loss of his son in Iraq, after an enlistment urged on him by Toller. Illness is foretold by a painful stomach and blood in his urine. And humiliation inheres in his position ministering to a vanishingly small congregation at a 250-year-old Reformed Church in upstate New York. The church has been absorbed by a thriving megachurch, Abundant Life, whose leader (played with smarmy condescension by Cedric Kyles) views Toller as a charity case. Pastor Jeffers keeps First Reformed running as a kind of quaint theme-park attraction, with Toller as its essentially decorative pastor. In the prim white sanctuary he serves not only as preacher but also as tour guide, hawking commemorative T-shirts and enduring casual slights from tourists. One man makes a lewd joke about the church organ, then tips Toller a dollar on the way out.

Mired in grimness, Rev. Toller medicates himself with whiskey and writes nightly in his journal, entries voiced aloud as we watch his pen scritch across the page. The writing is less about expression than expiation. It’s clear that this recording of thoughts only amplifies their darkness, yet Toller forces himself to persevere, and we sense that a stringent honesty is a baseline commitment of his faith. Honesty with himself, that is; to the world, he turns a face of forced equanimity. “I want you to be happy,” says the choir director at Abundant Life (Victoria Hill), who is worried about him. “But I am happy,” he insists—and rarely have we seen a smile put on at more cost.

The plot of First Reformed centers on Toller’s effort to counsel a pregnant young congregant, Mary (Amanda Seyfried), and her husband, Michael (Philip Ettinger), who wants her to get an abortion. A radical environmental activist, Michael is convinced that the planet is doomed, and sooner rather than later; he alternates between rage at the corporate villains he holds responsible and despair at the prospect of bringing a child into a world teetering on calamity. The other, seemingly unrelated plotline involves the church’s looming sestercentennial celebration, which turns out to be underwritten, through Abundant Life, by one of those environmental villains. When these plotlines converge, they find Toller at the intersection, and writer-director Paul Schrader uses the ensuing events as a lit match held close to the pastor’s volatile spiritual core.

Brought up in the midwest in the Calvinist Christian Reformed Church, Schrader was homeschooled in a strictly observant family, and didn’t see his first movie until he snuck out to a theater at seventeen.
sharetweet

Schrader, now seventy-one, made a loud screenwriting debut back in 1976 with Taxi Driver, and went on to write three other Martin Scorsese films, including Raging Bull, while directing movies of his own, most notably American Gigolo (1980). Brought up in the midwest in the Calvinist Christian Reformed Church, he was homeschooled in a strictly observant family, and didn’t see his first movie until he snuck out to a theater at seventeen. In a recent interview on NPR’s Fresh Air, he spoke about escaping that world, getting an MA at UCLA’s film school, and projecting himself into a cultural milieu far removed from that of his upbringing. First Reformed represents a return to his roots.

Schrader is a cinema intellectual, who in his twenties published an influential essay on film noir and a study of Robert Bresson and Carl Dreyer. His new film’s obvious forebear is Bresson’s 1951 masterpiece, Diary of a Country Priest, with which it shares substantial overlap: the protagonist’s lurking intestinal illness and resort to alcohol; the pastoral counsel that leads to controversy; the voiced-over diary narration, expressing a desperate personal futility; and on and on. Both films exude a somber minimalism, with everything inessential stripped away, from the protagonist’s life and from the film itself. First Reformed radiates a mesmerizing severity. There’s no music, and Alexander Dynan’s camera remains stationary, so that characters move in and out of view. The formal language of the pastor’s diaristic musings, plus the sober, still camerawork, give the film an austere and literary aspect; I was reminded of Michael Haneke’s bitter, brutal masterpiece The White Ribbon. (I’m not sure why Schrader has named his protagonist after the left-wing German-Jewish playwright who committed suicide in a New York City hotel in 1939.) Another clear influence is Bergman’s Winter Light (1963), whose priest-protagonist also counsels a young man haunted by worry about global apocalypse.

Just as important, however, are films in the director’s own oeuvre. Schrader wrote The Last Temptation of Christ, with its portrait of a Jesus steeped in human fallenness. He also scripted Peter Weir’s Mosquito Coast, another showcase for a self-destructive male protagonist caught in an ever-darkening worldview. And above all, First Reformed looks back to Taxi Driver. As Reverend Toller’s despair deepens and hardens, and his intentions begin to take on a dire cast, the diaristic voiceover grows steadily bleaker, until inevitably our thoughts turn to Travis Bickle in his cab, ruminating about “the animals that come out at night,” and prophesying ominously that “someday a real rain will come and wash all this scum off the streets.” Schrader even references Taxi Driver explicitly, with a scene in which Toller pours whiskey into his cereal.

In the Fresh Air interview, Terry Gross pressed Schrader on the similarity, and the director demurred. Bickle, he said, was unaware and uneducated; his alienation and anger were “narcissistic,” while Reverend Toller’s are “existential.” And in fact, the first half of First Reformed is riveting precisely because of its steady bead on an inner battle between faith and despair. In one great scene early on, Toller counsels Michael, and the two men go back and forth on such basic issues of Christian faith as the existence of evil and the promise of an afterlife. “Hope is impossible without despair,” Toller tells Michael, and it’s hard to know whether he is waxing theological, or using a sly rhetorical device to try to flip the younger man’s attitude, or arguing desperately with himself...or all three.

The intensity of this exchange is abetted by facial close-ups that reveal the two men in protean sequences of perplexity, anguish, and doubt—and again reveal this film as Schrader’s homage to his gods of cinema. Indeed, the scene could be used to teach what Bergman meant when he praised “the correctly illuminated, directed, and acted close-up of an actor” as “the height of cinematography,” crediting it with “that incredibly strange and mysterious contact you can suddenly experience with another soul through an actor’s gaze.” (One should add Dreyer, that other subject of Schrader’s early book, and the intimacy with which he feasts upon the luminous visage of Maria Falconetti in The Passion of Joan of Arc.) And First Reformed is correctly acted, to be sure. With his faintly haggard face and pasty complexion, Ethan Hawke has a gift for portraying characters who look ill, and it boosts the unsettling nature of his performance. Schrader structures his film around close-ups in which the frame fills with Hawke’s face, registering small inflections of contending emotions—and so much pain, we can hardly look. But we can’t look away, either. Such moments lend First Reformed the feeling of capturing something fundamental about the human spirit under siege.

The last third of the film struggles with the burden of a gathering violence that may have belonged on the mean streets of Taxi Driver, but seems less organic here. Toller’s inner experience is set on an arc intended to justify extreme actions—not theologically, but dramatically—and at times a slow camera approach, combined with a throttled rumbling, creates horror-movie ominousness. Yet violence never attains the inevitability it did in Taxi Driver. Setting is a problem. Voice-over recitations from the Book of Revelation are intended to bring a pall of annihilating urgency to Toller’s movements amid the grayed-out upstate countryside, but the noirish New York City of the 1970s seemed a lot more like end days.

Yet First Reformed exerts an undeniable power. Scorsese has cited Bresson’s Diary of a Country Priest as an influence on Taxi Driver, and now Schrader has closed the circle with a film that explicitly channels both of them, giving us Travis Bickle in a cleric’s collar and completing a through line of protagonists caught in toxic isolation. Perhaps it’s true that a solitude originally intended to be narcissistic has become existential and prophetic. But it’s the same predicament. “Loneliness has followed me my whole life, everywhere,” Schrader had his antihero confess back then. “There’s no escape. I’m God’s lonely man.”