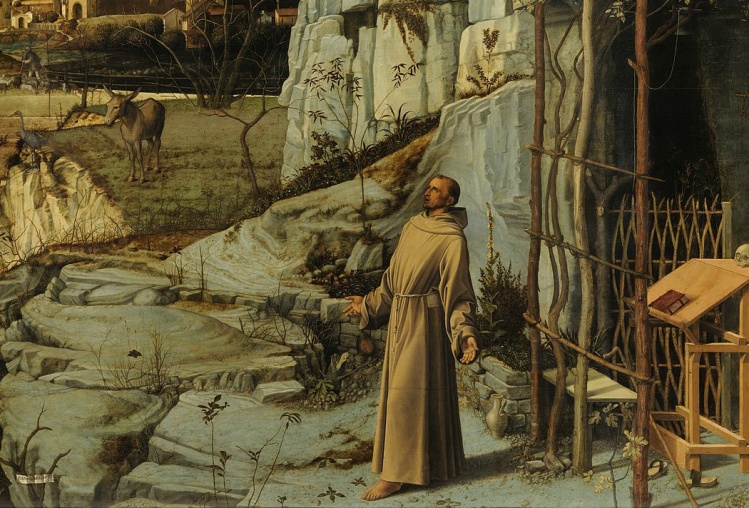 Detail of Saint Francis in the Desert—Giovanni Bellini, c. 1480

At the outset of Pope Francis’s papacy, much was said about his decision to adopt the name of the famed saint from Assisi. Of the many virtues St. Francis had, his humility and compassion for the marginalized were the ones I thought most drew the admiration of the new pope, as I wrote in Commonweal at the time.

Four and a half years into his papacy, Pope Francis had indeed emulated St. Francis in many ways. St. Francis is a prime example of the pope’s advice to clergy to be a “shepherd who smells like your sheep.” St. Francis could have sought to enter a well-stocked monastery but instead started a movement of impoverished, wandering preachers who went to where the people were.  From the start of his ministry, St. Francis reached out to the peripheries, whether to the lepers in his midst or to Muslims in far-off Egypt. And yes, he also loved actual sheep, saving them from the slaughter on occasion. (For that matter, to judge from the early chronicles, the itinerant friars may have smelled like sheep.)

As we mark the Feast of St. Francis of Assisi today, I have in mind another episode in the saint’s life that seems applicable to Pope Francis’s journey—the period in his life when more learned men tried to shunt him aside in the order he founded. Francis was angry and depressed in those years, and felt distant from God. He hated what was being done to him: put on a pedestal, but ignored.  Late in his life, Francis was viewed as a living saint, a status he was quick to reject. Dorothy Day’s comment on the same subject would apply to him: “Don’t call me a saint. I don’t want to be dismissed that easily.”

At the chapter meeting held in Assisi in 1220, Francis bowed out of leadership, which passed to his friend Peter of Catania. “From now on I am dead to you,” he told the assembled brothers, according to the friar Thomas of Celano, who wrote the early official accounts of the saint’s life. Elsewhere, he captured the shadows in Francis’s life in spiritual terms:

“At one time, a very serious temptation of spirit came upon the holy father, surely to embellish his crown. Because of it he was filled with anguish and sorrow; he afflicted and chastised his body, he prayed and wept bitterly. He was under attack in this way for several years."

St. Francis and his friars also faced suspicion of heresy early in their ministry, and the saint was certainly seen as a simpleton.
sharetweet

Francis was angered at changes that occurred in the order while he traveled to Egypt as the Fifth Crusade was being fought. His requirements that the order own no property and take no favors from church authorities were being compromised; it was not easy to run such a rapidly growing organization on the terms Francis wanted.

In some ways, Pope Francis is in a similar position. Like his namesake saint, he is extremely popular in his later years, widely admired for the message he preaches. At the same time, people who consider themselves more learned in theology are dismissing him—a conservative Catholic punditocracy even accusing him of spreading heresy, or simply portraying him as a simpleton.  St. Francis and his friars also faced suspicion of heresy early in their ministry, and the saint was certainly seen as a simpleton: an inspiring figure who was too impractical and idealistic for leadership.

No one ever said that servant leadership would be easy. But as we mark the 791st anniversary of St. Francis’s passing to his rewards, we are still talking about the example he set for Christian life. He’s a worthy model for a pope.

Donald Trump and the Death of Objectivity