Why the Noon Mass Is So Often Quiet
By Fr. Nonomen
U.S. Catholicism
Liturgy 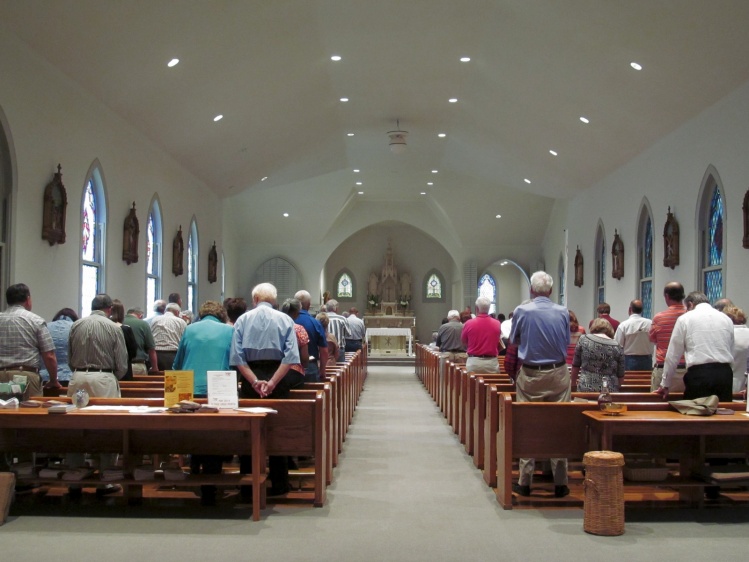 If the Zombie Apocalypse ever does arrive, I know where the Catholic zombies will be going to Mass. They will straggle-stumble straight for our twelve o’clock noon on Sunday. And they will feel at home. They will find community.

There is something strange about this Mass. People walk in late, very late. It is not uncommon to watch an entire family saunter in, casually look around, and debate which seat to take while I am halfway through a homily. Our church holds some five hundred people, yet the couple of hundred or so who make it to this Mass seem to deliberately scatter themselves as far from one another as possible. No one sings. The spoken responses are barely audible. Few receive from the cup and those who receive Communion at all tend to have a glazed, expressionless stare. Because it’s our last Mass of the weekend, I think it draws some folks from other parishes, so a number of faces are unfamiliar to me. Many of the people I do recognize usually attend one of the other weekend Masses, catching this one because of convenience or other commitments.

It’s true that every weekend Mass has its own personality and atmosphere. The Saturday vigil, for instance, is a pre-dinner crowd. People are in an anticipatory mood. This is the first stop on a night out, whether to a party or dinner with friends. The first Mass on Sunday morning, early as it is, might attract golfers, or kids with a later soccer game, or the older couple on their way to bacon and eggs at the diner. Mid-morning is the hands-down favorite of families with small children and their teens, dragged out of bed. But this last one of the day, high noon, always seems a little flat. I assure you that a great deal of care and energy is put into each of the weekend Masses with regard to hospitality, music, preaching, and the ministries of lectors and Eucharistic ministers. The noon Mass is no exception to this, yet nothing seems to help.

That glazed look wasn’t so much uncaring as it was preoccupied.
sharetweet

I called up some buddies and asked if they ever experienced this kind of thing. To my surprise, many had. Most chalked it up to “last chance” Mass syndrome—gotta go somewhere, anywhere, stop the car, let’s duck in here—and simply accepted it for what is was, not letting it trouble them a bit. Some other pastors surrendered to it and turned it into a “silent Mass” by eliminating the music completely, paring the homily to a couple of lines, and thereby creating a twenty-three minute worship experience designed to fulfill the obligation if not fill the soul. When I wondered out loud if they had considered a drive-thru for Communion, there seemed to be some silent consideration on the other end of the phone. One parish I called “gave” the Mass to the high-school Youth Ministry Group. The music is led by a contemporary choir and all the musicians and liturgical ministers are high-school kids. Only a couple of years old, it is still finding its way, although the pastor did need to veto a Lady Gaga–inspired Memorial Acclamation.

I found that doing even this minimal amount of research surprised me by providing a bit more insight into the “noon zombie” mindset. That glazed look wasn’t so much uncaring as it was preoccupied. School and family demands do not magically stop on Sunday mornings. Family members are pulled in a million directions at once and sometimes getting to church to pray as a family is a tremendous challenge. If their home faith community couldn’t accommodate their schedule, then isn’t the Christian response to treat them as the guests that they are? These moms and dads are not teaching their children to simply fulfill an obligation; they are insisting that this time together is something important, no matter how crazy the softball schedule gets. And those individuals huddled separately in the corner? They might have chosen this gathering because it better matches the mood they’re feeling, the need they have for a quieter spot in the church to think and pray about that sickness haunting their family, or that job that’s on the line. The lady in the third pew? I know why she comes to this Mass. She and her husband of sixty-four years used to attend the earlier one every week. When he died a month ago, she needed a change. The memories were too much.

I’m still not sure what to do about the noon Mass. I don’t think it needs a fifteen-year-old playing a guitar, but neither does dead silence seem like much of a solution either. Perhaps my peers who chose to accept the Mass for what it was are the wisest of all. At the very least, I shall stop calling it the Zombie Mass. That’s just not fair. Or kind. After all, though many of them have gotten into my head and heart, none of them have bitten me.

The Eyes Have It