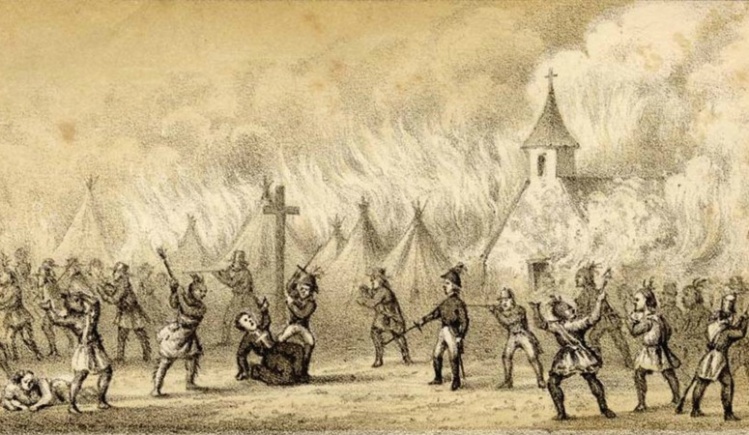 This book is a sensational eye-opener, even for me, a Jesuit for the past forty-six years. While I knew the oft-quoted rough denunciations of the Jesuits by John Adams and Thomas Jefferson, I had no idea of how deep and pervasive American anti-Jesuit sentiments were—nor why they were so extreme, nor how they were overcome—until I read McGreevy’s splendid work.

Some background first. The Society of Jesus founded in 1540 was suppressed by papal decree in 1773. Literally overnight this forced twenty-three thousand Jesuits out of their eight hundred schools and hundreds of other apostolic projects. Many were sent into exile or to prison. The story is a sad one indeed. In 1814 the Jesuits were restored and within a hundred years they had seventeen-thousand members.

The nineteenth century was a period of extraordinary growth for the Society, but many of us know little about that history. Worse, we have mistaken assumptions. Because of the influence of Jesuit General Pedro Arrupe (1965–83), many think of the order as broad-minded, committed to social justice, and fairly progressive. While that assessment might have some credibility today, in the nineteenth century the Society was very different.

McGreevy’s narrative follows the convergence of three main movements that constitute the oddly successful work of the Jesuits in the United States. First, after the restoration, Jesuits were naturally loyal to the papacy, becoming significant supporters of Pope Pius IX (1846–1878). In 1850, after a two-year political exile from Rome, Pius returned and urged the Jesuits to establish a new journal, Civiltà Cattolica. The journal soon became the most influential Catholic publication combatting the heterodox ideas proliferating not only across the continent but throughout the world. Subsequently, Jesuits assisted Pius in writing the 1854 declaration on the Immaculate Conception, the 1864 Syllabus of Errors, and the 1870 declaration on papal infallibility. Their fealty extended to Pope Leo XIII (1878–1903), who called on them “to defend the church and the Roman pontificate.”

Second, the emerging European liberal movements of the nineteenth century were perpetually at odds with the papacy. Liberal governments in Austria, Switzerland, France, and parts of modern day Italy, Germany, and Spain—with what McGreevy describes as their “liberal intolerance”—eventually expelled the Jesuits. McGreevy notes that the Jesuits were often pawns between civil and papal forces. At the same time the Jesuits became known in the press as opponents of progress, democratic sensibilities, and national unity.

Having barely recuperated from its suppression by the papacy, the Society looked with great disdain at the emerging liberal societies and their promise of fraternity, liberty, and equality. Nonetheless, being exiled from Europe meant the Jesuits were available for foreign missions, and they were immediately dispersed throughout the world. The revolutions of 1848 mark the time when exiled Jesuits were first sent in large numbers across the present-day United States. As the Jesuits arrived here, so did anti-Jesuit sentiments.

Third, the Jesuit influence changed with the enormous European migrations to the United States. While Catholics were a mere 3 percent of the American population in 1830, by 1900 they constituted 18 percent. At that time, the Jesuits were operating twenty-five universities, to say nothing of their other schools and apostolates.

It is ironic, to say the least, that clerics who were once the church’s most influential opponents of modernity should also have become the architects of modern global Catholicism. McGreevy helps us understand this achievement through a series of engaging biographical sketches that illustrate how the Jesuits grappled with the issues of religious liberty, public and Catholic education, pastoral and devotional formation, and emerging national identity. It is a very human, accessible, and memorable account.

Of all the stories McGreevy tells, Fr. John Bapst’s will become, I imagine, the most celebrated. Exiled from his native Switzerland in 1847, he arrived in New York City months later and was sent to a mission near Oldtown, Maine, originally evangelized by the French-born Jesuit Sebastian Râle (1657–1724). Râle was later slaughtered and scalped by a New England militia. Bapst needed to learn English and the language of the neighboring Penobscot tribe. By 1850, he was thoroughly impressed with life in America and wrote that he could preach “before an audience composed entirely of Protestants, and I feel sure that I would not suffer a single interruption.” His missionary work extended to many surrounding towns, and in 1854 the thirty-nine-year-old Jesuit petitioned the Ellsworth school committee to prohibit requiring Catholic school children to read from the King James Bible. After his request was rejected, he called on the town’s Catholics to remove their children from the public schools and arranged to open a Catholic school.  Attacks on his home and a bombing of his chapel/classroom followed, and he was assigned to neighboring Bangor. Ellsworth townspeople declared they would tar and feather him if he returned. Several months later, while on his way to a sick call, he stopped in Ellsworth to hear confessions. By nightfall a gang of a hundred had carried out the threat.

By 1856, the intrepid Bapst, having left Ellsworth behind, was worried that “this infidel country” would crush Catholics or tempt them into apostasy, and he began looking for a variety of ways to shore up and sustain Catholicism in America. In 1863, after a stint at the College of the Holy Cross, he founded Boston College and remained president for six years.

Bapst’s story exemplifies the single-minded determination characteristic of the Jesuit missions. He adapted to the local Protestant culture in order to create the institutions needed to train, minister, foster, and celebrate the Catholic faith. At the same time, the Jesuits remained detached from civic society, especially after being rebuffed in securing public funding for religious education. The threat of persecution and violence played itself out again and again in the vitriol of Alessandro Gavazzi, the Know-Nothing Party, Ulysses S. Grant, and others. Yet, the Jesuits carried on, learned, adapted, and succeeded. These Jesuits, both native and foreign-born, knew enough about being foreigners in a strange land that when they were sent to the U.S.-occupied Philippines (1898–1946), they assumed the mission from their Spanish brothers with uncommon sensitivity.

McGreevy’s groundbreaking work leaves readers like me with numerous questions. How pervasive was the Jesuit indifference to slavery? While the Republican Party’s anti-slavery program was coupled with an anti-Catholic one, clearly there must be a better explanation for the order’s appalling silence. As native-born Americans entered Jesuit novitiates, how did their European instructors treat the “indigenous” vocations? How did Jesuits view U.S. citizenship? We know that at the Jesuit novitiate in Woodstock, Maryland, European theologians did not allow their scholastics and priests to vote in elections. Yet two years after being tarred and feathered, Bapst became a citizen. Finally, John O’Malley notes that the Jesuits’ decision to focus on education had an enormous influence not only on their students but on themselves. What difference did that decision make for Jesuits in America? Other questions arise, but I will let readers raise them after they have dived into this extraordinarily rewarding work.