By Dorothy Day
From the Archives
Poverty
Social Justice
Spirituality 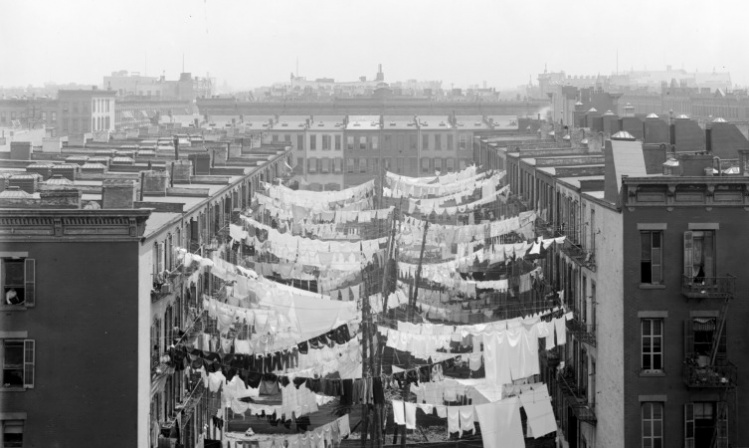 When we came back to New York from our visit to Florida, Teresa and I, we had an opportunity to rent our little summer place for six months, so we were faced with the necessity of finding a home for ourselves and furniture to put in it. Hotel bills being exhorbitant, we were in a rush, and in a few days we found a comfortable tenement apartment, with steam heat, hot water and plenty of sunlight—all for $28.00 a month, in the warmly crowded neighborhood of Avenue A and Twelfth Street. It was early spring with a cold tang in the air, very refreshing after the torpid heat of Florida. We had both sunlight and warmth, and best of all, a huge expanse of sky to look out upon, owing to the presence of a long low garage on the other side of the street. Every night we could watch the sky in the south change from rose to violet, and as the spring advanced, there were the early storms to enjoy, massive clouds, pierced by lances of lightning, sheets of silver rain against the purple dusk. It is a luxury indeed to have acres of sky to look out upon in New York City.

“We have the two most important things right on our street,” said Teresa, thinking of the miles we had to go in Florida to reach a church. “You can go to Mass every day and leave me home to play, and I can go to school and leave you home to work. I don't need to go to church, do I, because we have plenty of praying in school? Too much sometimes.”

The school, which was one she had attended before, is a day nursery just down the street, run by the Helpers of the Sacred Heart. Babies of one year old and up are taken care of, children of the first three grades are taught, and the children who have passed on to higher grades and are attending other schools, public and parochial, in the neighborhood, come back to the nursery for their luncheon and for after-school activities. There are 275 children taken care of all day long by the Sisters, in addition to the children who come in for meals. The place is large and roomy, and there is a roof garden and a backyard and a play-room under the roof for recreation.

One of the Sisters of the order heads a Sunday School too, which takes care of 1,200 young ones in the district who attend public school.

“Today,” said Teresa, “I had four dishes of spaghetti. It was very good.”

“It must have been.”

“There was one little boy who had six. But he was a cochina. He is always hungry. Every afternoon after school when we have bread and jam or bread and cheese—if it’s bread and cheese, I give him the cheese.”

Lunch is not confined to spaghetti alone. Perhaps there is pineapple or stewed apricots for dessert. And bread and milk too.

The nursery is open from seven in the morning until six at night, and children are cared for all day and fed practically two meals a day for $1.20 a week.

At this time, where there is great talk about provision made for the babies and little children by the Soviet government, it is good to call attention to the fact that Mother Church has always kept in mind the pre-school child. There are nurseries in every section of the city for the child of the working mother. The state and city, except for clinics, have always ignored the needs of the child under kindergarten age, and those attending kindergarten are only cared for three hours a day. What other nurseries there are, are either very expensive affairs, charging from $30.00 to $75.00 a month, or else works of charity, run by brisk social workers for the “lower classes.”

Little Teresa attended one of these her first and second winters, and I shall never forget the painted chairs on which the little ones sat and sat, and the painted toys (to be looked at) on the shelves, and the uniforms covering the heterogeneous garments of the poor, and the briskness, the terrible briskness, of those in charge. I remember coming early to the nursery one winter afternoon, in time to get a glimpse of child after child being propelled with horrid speed in and out of the washroom, and the worn and haggard faces of the attendant looking forward to the end of the day. Thank God, the Sisters think in terms of eternity. There is never that unpleasant hurry.

The church across the street from us is an Italian church, and there are dramatic funerals very often, with a band accompanying the hearse down the street to the church. The automobiles move along at a funereal pace, the band, when it is not playing, drags its many feet with a shushing along the asphalt, and as the cortege approaches, the bell from the church tower tolls a single spaced note, a dread and mournful sound. The music is triumphant and soul-stirring, lending an especial poignance to the spectacle.

To Teresa, this glimpse of death with its massed flowers, its dignity and solemnity, has lent a new aspect to heaven. A year ago she had said, “I do not want to die and go to heaven. I want to stay where there is plenty of fresh air.” And this evident impression of a stuffy heaven which she had in some way or other visualized, dismayed me. She was thinking of the grave, I assured her, and not of a heaven which was filled with not only all the present delights of her life, but many more.

“Beaches?” she wanted to know. “And many little crabs and snails and pretty shells? I do want to live on a beach in heaven.” And I assured her that there were indeed beaches in heaven.

The brass band and flowers of the Italian funerals lent emphasis in some way to my recital of heavenly joys and she said contentedly that if either of us got there first, we would wait for the other.

Along the side walls of the church are glass-enclosed statues: Our Lady of the City, Our Lady of Perpetual Help, Our Lady of Grace, Our Lady of Mt. Carmel, Our Lady, Help of Chris­ tians and Our Lady of Lourdes. In addition to the usual statues of Saint Joseph, Saint Anthony, Saint Therese and Saint Anne, there are those of Cosmos and Damien, Saint Sebastian, a fine figure of Saint John the Baptist dressed in real sheepskin, and Blessed Don Bosco in a little shrine all his own.

There was a tremendous procession which stretched for ten blocks around the church on the feast day of Our Lady, Help of Christians, and though the day was cold, there was a line of white-clad girls wreathed and garlanded and carrying banners. It was impressive to see the older women, bent and twisted by life, holding aloft the banners of their faith, on which were emblazoned the insignia of the associations and confraternities to which they belonged. . . .

As I mentioned before, there was not only the problem of finding a home, but furniture to fill it, since all my belongings were in the country. I was able to bring in two beds, my sister contributed chairs and a table, other contributions were forthcoming in the shape of wicker furniture, pillows, rugs, etc., and my younger brother, whom we sometimes call Brother Juniper, insisted upon making me some furniture. His bookcases looked solid until books were put into them, and then they teetered dangerously. His benches could not be sat on. The table he constructed for my typewriter looked so heavy and solid that I was deceived into a feeling of security about it and began using it at once

It is my custom when possible to attend Benediction. (“I am perfickly able to mind the house and take care of myself,” Teresa says.) So one evening, on coming in at eight thirty, I was startled to hear shrieks and wails of neighbors coming in from my front room. I sped up the stairs, with my heart pounding, and found Brother Juniper's table in pieces on the floor, and my typewriter and papers in wild confusion all around. Teresa and Anita, the little girl next door, had merely bumped into it and the table had gone down.

My neighbor with Jewish emotionalism had rushed to the rescue and, seeing that it was my means of livelihood which had fallen on the floor, and fearing that her child had had some part in the desecration of my desk, she had started her wailings which had brought the whole house to my door.

Little Anita was Teresa's constant playmate after school all through the spring. Not old enough to go to school herself, she insisted on coming in to play school, or “Make for fun you're my baby and I'm your mama,” was one of the games. Anita is very tiny, with long hair which hangs in pigtails on either side of her fat face. She and Teresa were very fond of each other, and it was hard to drag them apart at bedtime.

“Let me stay just until she gets into bed,” Anita said.

“Let her stay just until I say my prayers,” Teresa added.

And this custom of letting Anita stay made Teresa forget that sometimes there were too many prayers and that some of them were too long. I myself did not know how many prayers she knew until she used them all as a means of letting Anita stay, and then I heard, for the first time, the Creed, the Acts of Contrition, of Charity and of Hope, in addition to the Lord's Prayer and the Hail Mary. When the bless-thems came along, Anita waited with breathless interest until her name too was mentioned among the friends and relatives.

It was Anita who started the game of "Make for fun we are two ladies with lots of little babies and we must go to visit the Lady Mary." So they sat with their doll carriages beneath the statue on the mantelpiece and talked of tonsillectomies and feedings, while the figure of Our Lady of Grace, which has been blessed by a Pope and has traveled from Rome to Spain, to South America, to New York, presided with a benign smile over two little girls of East Twelfth Street.

For the Truly Poor