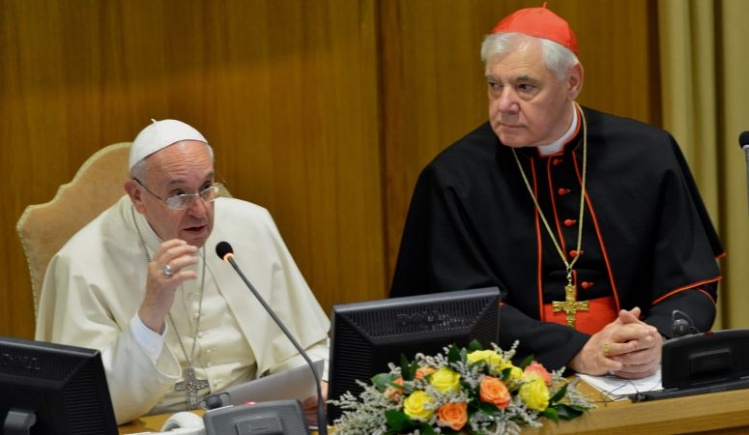 In the aftermath of last October’s Synod on the Family, we now have the opportunity to take stock of both what has been accomplished and the difficulties that remain. One difficulty concerns the way in which appeals have been made to the normative and unchanging character of church doctrine.

As is well known, the synod offered a lively debate regarding church teaching on the “indissolubility” of marriage and the possibility of extending eucharistic Communion to some divorced and remarried couples who have not received an annulment. The issue is certainly complex; however, a troubling refrain heard both inside and outside the synod was the simple assertion that “doctrine can’t change.” It is not a surprising claim for those ideological camps that hold to largely static, ahistorical understandings of divine revelation. One of the bluntest statements of this claim came from New York Times columnist, Ross Douthat, who boldly exclaimed that even “the pope can’t change doctrine.” Strangely, however, there were also a number of “progressive” voices that embraced this assumption, emphasizing ways in which compassion and prudence might guide us to a fresh “pastoral application” of supposedly unchanging church teaching.

During and after the synod, Catholic bishops were generally silent about the church’s understanding of how doctrine can develop. A few did raise the topic. Before the 2014 synod meeting, Cardinal Reinhard Marx, the archbishop of Munich and Freising, told reporters that it was too restrictive to say that church doctrine can never change. Cardinal Gerhard Müller, the prefect of the Congregation for the Doctrine of the Faith, also acknowledged that doctrine can develop as long as it remains in harmony with basic principles of Catholic teaching. Yet, by and large, the Catholic teaching on the development of doctrine, so central to the teaching of the Second Vatican Council, was simply ignored. Why?

Some Catholics worry that any appeal to doctrinal development amounts to defection from the Gospel and capitulation to what Pope Benedict once called the “tyranny of relativism.” Those who embrace this view may have trouble seeing the difference between unjustified cultural accommodation and authentic doctrinal development. Others acknowledge the legitimacy of doctrinal development in principle but then place serious constraints on the concept by reducing it to little more than the changing historical application of unchanging doctrinal principles.

Another difficulty emerges when an undifferentiated appeal to “doctrine” itself is made. Overlooked here is the fact that not all normative church teaching carries the same degree of authority. Dogma, those teachings that directly communicate divine revelation (e.g., the Incarnation or belief in the real presence of Christ in the Eucharist), can grow and develop, often significantly, but cannot be reversed. We can also speak of definitive doctrines, those teachings necessary to safeguard and defend divine revelation (e.g., the determination of those books that belong to the biblical canon) as irreversible. But much normative Catholic teaching that goes by the term “doctrine” belongs in neither of those categories (e.g., the prohibition of artificial contraception). These teachings, often called authoritative doctrine, not only develop; sometimes they have developed in ways that amount to a substantive reversal, or what the theologian John Thiel calls “dramatic development” (e.g., the church’s teaching on slavery).

The extent to which the church’s teachings have changed in the past few centuries, often to the point of reversal, is breathtaking. Catholicism went from supporting slavery to condemning it as an intrinsic evil and from prohibiting usury to allowing it (while continuing to condemn unjust interest rates). In the nineteenth century, the papacy was an implacable enemy of both democracy and religious freedom, but in the second half of the twentieth century it became their most outstanding global defender. As John T. Noonan, the author of A Church That Can and Cannot Change, puts it: “Wide shifts in the teaching of moral duties, once presented as part of Christian doctrine by the magisterium, have occurred.... In the course of this displacement of one set of principles, what was forbidden became lawful (the cases of usury and marriage); what was permissible became unlawful (the case of slavery); and what was required became forbidden (the persecution of heretics).”

IT IS NOT only ahistorical but even strangely un-Catholic to assert that doctrine does not and cannot change. In responding to Protestants and Anglicans who criticized Roman Catholic teachings for introducing innovations (concerning the Blessed Virgin and the doctrine of Purgatory, for example), John Henry Newman developed an extended account of how doctrine develops from what was implicitly present in Scripture and the Christian tradition. The bishops at Vatican II built on Newman’s insight when they wrote:

For there is a growth in the understanding of the realities and the words which have been handed down. This happens through the contemplation and study made by believers, who treasure these things in their hearts through a penetrating understanding of the spiritual realities which they experience, and through the preaching of those who have received through Episcopal succession the sure gift of truth. For as the centuries succeed one another, the church constantly moves forward toward the fullness of divine truth until the words of God reach their complete fulfillment in her (Dei verbum).

Genuine doctrinal development flows from a new and sometimes deeper understanding of the Gospel than was possible to Christians of earlier centuries. The fact of development underscores the importance of a distinction articulated by John Paul II in Sollicitudo rei socialis. Speaking of the body of Catholic social teachings, he wrote:

On the one hand it is constant, for it remains identical in its fundamental inspiration, in its “principles of reflection,” in its “criteria of judgment,” in its basic “directives for action,” and above all in its vital link with the Gospel of the Lord. On the other hand, it is ever new, because it is subject to the necessary and opportune adaptations suggested by the changes in historical conditions and by the unceasing flow of the events which are the setting of the life of people and society.

John Paul II himself presided over a significant development in the church’s teaching on capital punishment, and Pope Francis did so in his encyclical on ecology. In a recent speech at a conference held in Florence, the pope said, “Christian doctrine is not a closed system incapable of generating questions, doubts, interrogatives—but is alive, knows being unsettled, enlivened.... It has a face that is not rigid, it has a body that moves and grows, it has a soft flesh: it is called Jesus Christ.”

Finally, the distinction between doctrine and pastoral application, so frequently employed in synodal debates, retains real value. However, the relationship cannot be reduced to that of abstract and unchanging doctrinal principles generating specific pastoral applications. We must remember that much church doctrine emerged out of concrete pastoral situations (the debates about the question of whether to re-baptize those who rejected the faith under threat of persecution, for example). As both Vatican II and Pope Francis have insisted, doctrine can be properly interpreted and applied only when considered in the light of the basic Christian message of love, justice, and mercy. In his address at the close of the synod, Pope Francis said:  “The synod experience also made us better realize that the true defenders of doctrine are not those that uphold its letter, but its spirit; not ideas, but people; not formulae, but the gratuitousness of God’s love and forgiveness.” In short, doctrine is pastoral in its origin, interpretation, and implementation.

Engagement with vexing questions is part of the life of a pilgrim church. We should not shy away from those challenges, nor should we fear them. However, in doing so we must keep before us a simple and indisputable fact: Over the past two millennia the accumulating insights of the People of God, forged in lived experience and tested by the church’s pastors, have enabled the Christian tradition to come to a deeper understanding of the Gospel. We call this the development of doctrine. To deny that doctrinal development is possible is to deny the possibility that the Holy Spirit might be drawing the church into a fuller apprehension of the truth. If we are to embrace what Pope Francis calls “big hearts open to God,” we must also cultivate “big minds open to God.”