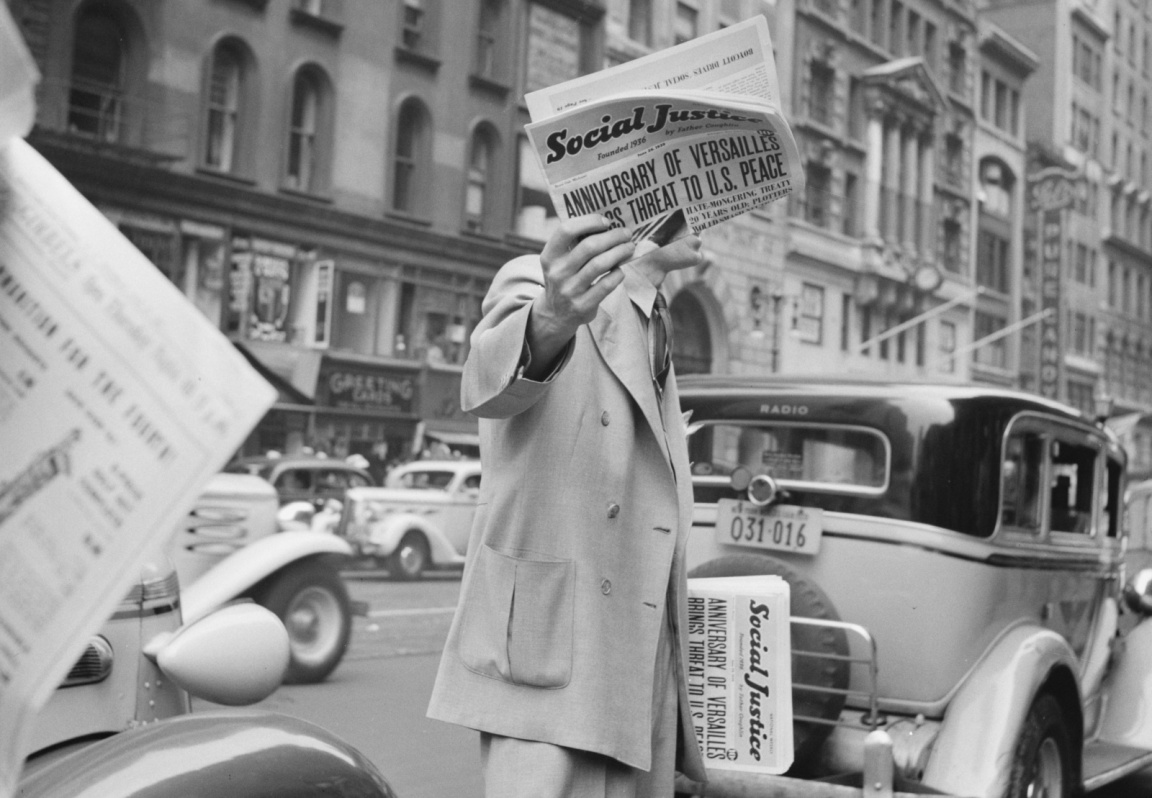 From the Feb. 14, 1936, Issue
By Virgil Michel
From the Archives
Social Justice
Theology

The confusion resulting from a too glib usage of terminology has in our times been a most painful, and no doubt destructive, phenomenon. Even those persons anxiously and with good-will seeking to further social justice have been prone to use exact terms as glittering generalities and to arrive at contradictory conclusions. Father Michel, profiting by the discussion at the Institute of Social Justice at St. John's University, Minnesota during recent years, seeks to arrive at some common understandings for current ideology. —The Editors.

ARE THERE any schemes of social reconstruction offered to the public today that do not appear under the rising star of social justice? Many as are these schemes, and still more so the discussions on aspects of social justice, there is one point that almost all of them have in common—the absence of any attempt to define what is really meant by social justice.

In a brief survey of the articles in Catholic magazines listed  under "Social Justice" in the latest  volume of the Periodical Index, I came upon only one attempt to define the term. It appeared  in THE COMMONWEAL of April 13, 1934, in an article entitled "New Deal and Social Justice," by Monsignor John A. Ryan. There we find the following paragraph:

A short definition of social justice would be: Just treatment for every class in the community, particularly the working classes. Pius XI uses and applies the expression in many places; for example, in discussing just wages, just interest, the rights and duties of property and in describing the nature of the new social order which he sets forth. Social justice, he says, must permeate "all institutions of public and social life, and must build up a juridical and social order capable of pervading all economic activity."

While the present article was in first draft form, the November issue of Blackfriars appeared with an article on "The Elements of Social Justice." Surprisingly enough, there is nowhere in it a clear  statement  of what is meant by social justice.

For he who serves a community serves all the men comprising the  community.  In both of these ways, we can have justice truly so called. It is evident, however, that all who are comprised in a community have to the community the relation of part to whole, etc.,  etc.

I have quoted so much to indicate the approach of Aquinas to the question of justice. For him the individual is always part of a larger society, and the question of justice must view man first of all from that standpoint. We have been accustomed to begin the discussion and definition of justice in terms of commutative or exchange justice, which regulates the relations between individual men. This is fully in accordance with our individualistic  temper, which sprang from the concepts of liberal enlightenment developed under the inspiration of Rousseau, and according to which man is by nature a self-sufficient individual and becomes social only by artificial contract or agreement.

Any good of a part, says Aquinas on the contrary, is referable to the good of the whole. Accordingly the good achieved by any virtue, whether it regards man in himself, or man as related to his fellow men is referable to the common good to which justice directs things. Consequently, the acts of all the virtues can pertain to justice, in so far as the latter directs man to the common good. For this reason, justice is called a general virtue (Ibid.). Aquinas concludes this development as follows: Since it is the part of law to regulate all things for the common good, the justice which in the above way was called general, is called legal justice, because by it "man conforms to law which orders the acts of all virtues to the common good."

It is from this Thomistic viewpoint that our modern division into three kinds of justice has come: (1) commutative or exchange justice, which is an equal give-and-take between individuals; (2) distributive justice, by which the whole gives to the various parts what each of them has coming to it; and (3) legal justice, by which the parts give to the whole what is owing to it.

Christian expositions of the three kinds of justice of ten given the impression that these are so many divisions that are exclusive of one another. Again, they speak at times of legal justice as the justice prescribed by the laws of the State for the common good. The first of these views is not that of Aquinas. Whether the second is may well be doubted, although a cursory inspection does not reveal any statement to the contrary. The elucidation of this point would be a good task for the expert commentator on Thomas.

In the article on "Justice" in The Catholic Encyclopedia, commutative justice is spoken of as individual justice, and both distributive and legal justice are mentioned as social. Further, on the view is offered that commutative justice "is in reality the only species of justice in the strict sense" with the added statement that "there is much to be said for the latter view." This is most certainly un-Thomistic, if it is meant to imply any minimizing of the virtues of either distributive or legal justice.

Thomas Aquinas draws a parallel in which he says (Ibid., a.12):

It is evident from quotations further above that for Aquinas the general virtue of justice whose object is the common good not only includes commutative and distributive justice; it also includes in a way all the moral virtues it is here said to excel.

For Thomas, the division of justice, as given succinctly by Cajetan, is first of all into general (sometimes called legal) and particular, which latter is then divided into commutative and distributive. However, at times Aquinas also speaks of legal justice as a species of general justice. As mentioned above, it is a good point for special study.

Now if we examine the passages in Quadra­gesimo Anno in which social justice is mentioned (there are about twelve I believe), we shall be struck at once by the close connection in them between social justice and the common good. The common good is declared the object of social justice, so that we can define the latter as the virtue of according to the common good whatever is owing to it by individuals or groups. The obligation of social justice rests on the basic social nature of man and on the contribution society makes to the development, physical, moral, intellectual, spiritual, of every human being. Social justice, then, cannot be restricted to legal justice, least of all to the  duties  prescribed by positive law for the support of the common  good.  Nor can it be restricted to legal justice and distributive justice, even if both of these be taken in their widest sense.

Man is by nature a social animal; he cannot divide himself or his actions strictly into two separate compartments, one of which is individual and the other social. The individual man himself is social, so that any of his actions whatsoever may have a greater or less social effect; almost every action of his is in some way, either positively or negatively, related to the common good. This is true also of those actions of men that come strictly under commutative justice.

In this wider sense, we can then define social justice as that virtue by which individuals and groups contribute their positive share to the maintenance of the common good and moreover regulate all their actions in proper relation to the common good.

Today it is of supreme importance to regain a proper conception of social justice so that we may again recapture something of the virtue itself without overbalancing ourselves. The imperativeness of this task comes from two factors whose opposite trends are productive of much of our present chaos: (1) the increasing social inter-relation of all the aspects of human life, especially in the economic field; (2) the disruptive effect of the type of individualism that is the child not of Christianity but of a rejection of Christianity in the name of a liberal enlightenment, of which the chief offspring was extreme economic liberalism.

But we may have gone only a weak step toward the recapturing of social justice when we define it as the virtue of relating all actions properly toward the common good. Everything still depends on what we understand by that "common good," or how we conceive it in its relation to the individuals that make up human society. To this subject we shall address ourselves soon.

Dom Virgil Michel, C.S.B., is with the Liturgical Press.