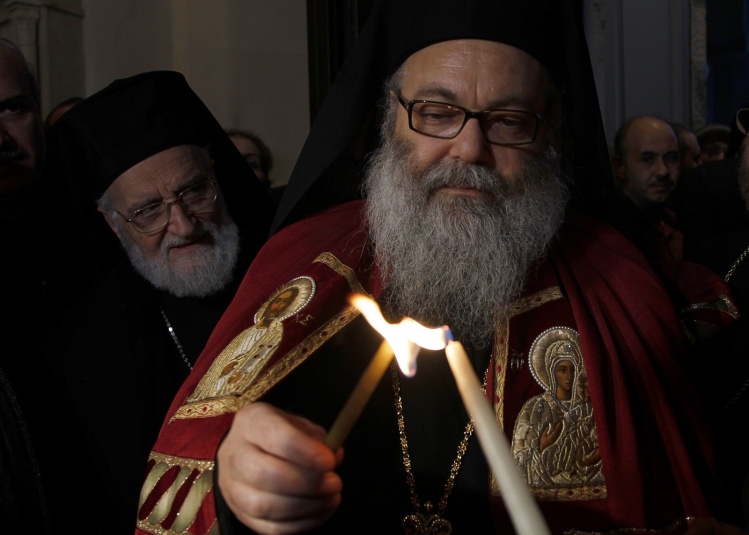 I walk into the vestibule of St. George’s Antiochian Orthodox Church early Sunday morning with no connection to the parish but the fact that, once, someone I loved had brought me to worship here. Now, with no plans to convert, no loved one inviting me, no reason to be here but a nagging desire to return, I feel almost ashamed. For one thing, I’m alone; most other attendees are filing in with families. I’ve never liked going to church, but I’ll spend two hours here—on top of an evening Catholic Mass. Stiff-legged, and, I’m sure, absurd with my straight-ahead, catch-no-eye stare, I take my place as close to the back as possible.

The liturgy proceeds: the slow, sonorous voices of priest and choir chanting in Arabic, interspersed with some English and Greek. Sometimes the luxuriant melancholy of the chanting breaks into a harsh, almost defiant key. I want to sing along, but I don’t know Arabic. The priest’s voice rises above the others from the sanctuary a thousand miles away. When, at the responses, I lift up my hands to cross myself, they are clumsy and just a few moments behind. I’ve already flubbed kissing the icon of the Theotokos, as I’m sure all eyes have seen and noted. I let my hands and voice drop.

Now the liturgy is about a third of the way through, and the church really begins to fill—mostly families with younger children, ambling or scurrying in with haste but no anxiety. Little girls wear polyester skirts and awkward, rhinestone-studded “high heels”—strappy white sandals with half an inch’s boost that I remember from my own childhood attempts to be fancy for church. I’ve lost track of the responses completely now. Everyone stands, except for the old, the infirm, and, apparently, the interlopers who didn’t catch on and are too proud to be late in rising.

One of the sitters, directly in front of me, strains a hearing aid toward the altar. He is little, wrinkled, and dark, with white tufts of hair ringing his head and protruding from his ears and nostrils. A cell phone rings. The old man’s daughter gesticulates at him frantically, her grey-streaked bob shaking with indignation. Misreading her signals, he shrugs, answers, and breaks into a full-volume stream of rapid Arabic. His daughter turns around, rolls her eyes, and catches mine. She shakes her head, as if to say “men.” I shake mine back, “oh, men,” and think that perhaps they can’t tell I’m an outsider after all.

They do, of course. After the liturgy, at least five people will approach me at the coffee hour, say, “You are new, yes?” and pile my plate with pastries.

These are the people right-wing publications call “Christians” in scare quotes and condemn for daring to find fault with the state of Israel. According to the narrow sight line of American political discourse, these exiled representatives of the world’s oldest Christian communities do not exist: you can be a freedom-loving Christian or a terrorist Arab, but you cannot be both.

Communion time. The children line up in front of the priest’s wife, and it is comforting to see that Orthodox children are as fidgety as Catholic children. As people file haphazardly up to the Eucharist, babies and grownups alike, I sit down. I have not gone to Communion regularly in years, for many reasons. Every Sunday I dread the grim pre-Communion ritual—the kindly officious ushers signaling the people to rise and line up, pew by pew, the consciousness of holding up the line as I try to let others get by me. Here it is more or less a free-for-all, and I’m satisfied that I’ve passed more or less unnoticed.

But I haven’t, or not quite, because four women offer me holy bread from their hands as they pass by. The bread, hunks of the communion loaf left unconsecrated, is free for anyone to take and distribute. I gobble it down eagerly. I must look like the fat robins in the park near my home, beady-eyed and impudent in their chirpy clamor for food, sucking up the breadcrumbs that toddlers throw them. My father says that forsythia is the first sign of thaw in Philadelphia, but robins mean that spring has taken hold and the frozen ground is beginning to break. The liturgy is finishing, and I’m still nibbling crumbs from my hands, a fat robin, happy in the house of the Lord.