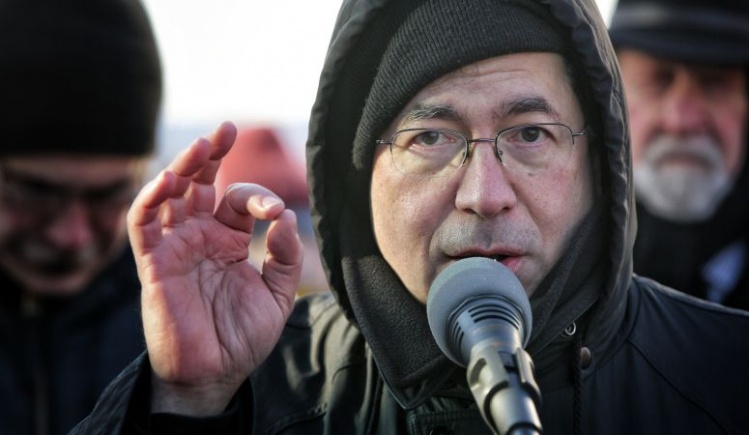 Conservative Catholics on Donald Trump’s Catholic advisory committee are facing a test of conscience, and failing. The revelation last week that Trump used crude and demeaning language to boast about sexual assault in 2005 wasn’t enough to convince a Catholic priest and others advising Trump to step away from a campaign wading in the fetid waters of misogyny and xenophobia and playing on white resentment.

The rationale for sticking with Trump makes for painful reading, but it also illuminates how Catholics who worship the idol of single-issue politics damage the credibility of a prolife movement they want to serve.

Joseph Cella, Trump’s top liaison to Catholics, issued a statement deploring Trump’s “repulsive” comments, but is still pledging loyalty to a candidate he argues will protect religious freedom and appoint anti-abortion Supreme Court judges. Fr. Frank Pavone of Priests for Life, also on Trump’s Catholic advisory committee, makes the same case as Cella. After describing Trump’s behavior as “repulsive”—at least conservative Catholics are on message with the same adjective—Pavone told Catholic News Agency that he will still vote for Trump and encourage others to do so.

“What an incredible reparation Mr. Trump is making now for any past faults, by the very fact that he is running as the Republican nominee for president, and is ready to nominate the right kind of judges and sign the right kinds of legislation, which will steer our nation away from so many morally corrupt public policies,” said Pavone, who advised George W. Bush during the 2000 election and remained an ally through his two terms as president. “It takes a great deal of moral courage, actually, to take the step Mr. Trump is taking by running for public office. He knows his past and knows what will be brought up about it. Yet he is willing to move forward both personally and professionally for the good of the country.”

I will pause as you let that remarkable bit of self-delusion sink in.

Most Catholics across the ideological spectrum would likely agree that priests shouldn’t be endorsing political candidates in the first place. Praising the “moral courage” of someone who boasted about grabbing women’s genitals and claimed Pope Francis has been used as a pawn by Mexican officials, and who continues to use Twitter to make ad hominem attacks, is more than simply tone deaf. It’s the willful blindness required when putting politics and narrow ideologies before the common good.

Cella is no stranger to politics either. He founded the National Catholic Prayer Breakfast, an annual event that frequently gives Republican leaders who are conservative Catholics a chance to rub shoulders with church leaders and tout their prolife positions—even as consistent-ethic-of-life Catholicism tends to be missing from that Washington confab. Only a few months ago, Cella joined more than three dozen prominent Catholic conservatives who described Trump as “manifestly unfit to be president of the United States.” Writing in the National Review under the banner “An Appeal to Our Fellow Catholics,” they argued:

His campaign has already driven our politics down to new levels of vulgarity. His appeals to racial and ethnic fears and prejudice are offensive to any genuinely Catholic sensibility. He promised to order U.S. military personnel to torture terrorist suspects and to kill terrorists’ families — actions condemned by the Church and policies that would bring shame upon our country. And there is nothing in his campaign or his previous record that gives us grounds for confidence that he genuinely shares our commitments to the right to life, to religious freedom and the rights of conscience, to rebuilding the marriage culture, or to subsidiarity and the principle of limited constitutional government.

Cella seems to have since had a Saul-on-the-way-to-the-White House moment. Consistency may be the hobgoblin of little minds, but it’s more than a little awkward that the person leading Trump’s Catholic outreach is on record as describing his candidacy as “offensive to any genuinely Catholic sensibility.”

After last week’s revelations, some other prominent conservative Catholics are either changing course or expressing regret for embracing Trump. First Things editor R. R. Reno, who recently endorsed Trump in his personal capacity, told the Washington Post last weekend that he could not finish an op-ed he was writing about his decision to back the candidate. “It’s not just that I’m jammed up with deadlines, but Trump has hit new moral lows (who thought that possible???) and I’m beginning to regret signaling any public support, as you can imagine,” he said in an email. CatholicVote.org, a lay group, released a statement over the weekend calling on Trump to drop out. During the primaries, the group argued that Catholics should not vote for Trump, but last month said he was a better choice for Catholic voters than Hillary Clinton.

Abortion, marriage, and religious liberty—all raised by Catholic Trump-backers in their support of the candidate—are essential issues that deserve a civil debate in the public square. As I’ve argued before (“False Choices & Religious Liberty”), navigating this complicated terrain will require a stronger commitment to finding common ground and lowering the rhetorical temperature on both the right and left. But too many leading conservative Catholics, especially in election years, treat the Catholic social tradition as a formula rather than a centuries-old moral and intellectual framework that helps us discern what a political situation requires with prudence and proportionality.

Trump’s Catholic advisors and influential figures in the church—Carl Anderson of the Knights of Columbus is among the latter [*]—would have you believe that inequality, the plight of refugees, war, racism, the use of torture in interrogations, and the way climate change hurts the most vulnerable might be important considerations, but that they ultimately take a back seat to abortion and defending traditional marriage. As Nicholas Frankovich argued last month in National Review, this perspective is perhaps inevitable but also deeply flawed:

To an American Catholic whose political universe is defined by elections between mainstream Democrats and Republicans from the 1970s through approximately yesterday, a categorical prohibition of voting for candidates who support abortion rights might seem unproblematic, a logical extension of the Church’s rightful emphasis on the dignity of the human person from conception through natural death, but the sweep of the Church’s institutional memory is broader than that, extending well beyond our country’s post-Sixties social calamities and culture wars.

A certain strain of conservative Catholicism in the United States, shaped by the marriage of political convenience between Catholics and evangelicals during the formation of the religious right in the 1980s and ’90s, is now on life support. The idea that only a narrow set of “non-negotiable” issues define Catholic identity and require Catholics to vote a certain way is challenged by centuries of Catholic social thought. It’s also anathema to a pope who insists that “an economy of exclusion” and responding to the “cry of the earth and the cry of the poor” are not liberal causes, but essential to building a culture of life. They are fundamental demands of Christian discipleship that come from the heart of the Gospel.

A series of polls show that Donald Trump is doing far worse with Catholic voters than most Republican presidential candidates have in recent elections. Trump’s “massive Catholic problem,” as a Washington Post headline put it, extends beyond Latino Catholics who typically vote for Democrats, or voters who identity culturally as Catholics but who don’t view faith as central to their political worldviews. In one of the most interesting developments this election year, Catholics who attend Mass weekly—usually a strong predictor of support for Republicans—are backing Hillary Clinton over Trump by a slightly wider margin than Catholics who attend less frequently or rarely.

Time will tell whether that shift is an aberration that reflects a particular distaste for Trump—or whether it signals the beginning of a deeper religious-political realignment. The answer in part depends on what shape the Republican Party takes after Election Day. Another major trend line to watch is how an increasingly Latino presence in the pews will continue to influence the Catholic Church culturally, theologically, and politically. That’s especially the case given the way our first South American pope is trying to build a church of encounter that is influenced more by the villas miserias in Buenos Aires than the internal politics of the Vatican curia.

It’s clear that even if Trump loses next month, the forces that propelled his nomination can’t be squeezed back into the bottle. A struggle for the soul of the Republican Party is at hand. For now, Trump has urgent matters to address. At a time when the electorate is growing more diverse and nearly a quarter of the population identifies as “nones” who don’t affiliate with any religious denomination, Trump can’t count on white evangelicals to carry him to the White House. He would also need a Hail Mary pass to Catholic voters. But his Catholic advisors are sticking with an old playbook that never had much credibility theologically—and that now seems unlikely to save him electorally.

*The wording in an ealier version of this article suggested Carl Anderson is one of Donald Trump's Catholic advisors; he is not.