Will Our Church Fall Victim to Trumpism, Too?
By Massimo Faggioli
U.S. Catholicism
Election 2020 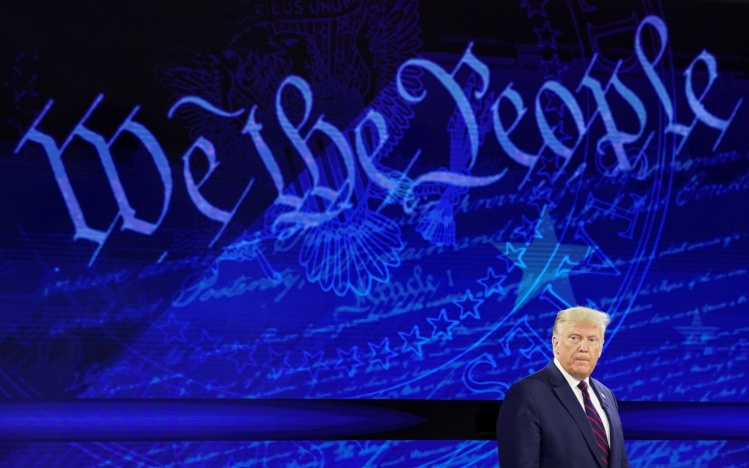 In a chapter on liars and lying in his Essays, Michel de Montaigne draws distinctions between truth and its opposite. There is not only the distinction “betwixt an untruth and a lie, and say that to tell an untruth is to tell a thing that is false, but that we ourselves believe to be true.” There is also the distinction between forms of lying and of telling the truth: “If falsehood had, like truth, but one face only, we should be upon better terms; for we should then take for certain the contrary to what the liar says: but the reverse of truth has a hundred thousand forms, and a field indefinite, without bound or limit.” Montaigne places a special emphasis on the value of the word, where the word is first and communication is second. Inverting the usual priorities, Montaigne emphasizes that the word is an end, while communication is a means: animals also communicate, but there is a difference in the way humans speak. Montaigne calls lying “an accursed vice” because it’s an eminently antisocial behavior: “We are not men, nor have other tie upon one another, but by our word. If we did but discover the horror and gravity of it, we should pursue it with fire and sword, and more justly than other crimes.”

As we’ve seen during the last few years in this country, manipulation of the word by powerful people is characterized by vulgarity, superficiality, and banality. Montaigne asks, “How much less sociable is false speaking than silence?” The word is the place of our singular humanity, anchored as it is in our flesh, in our social condition, in our sexuality, in our personal history. Only an appropriate use of the word makes the world intelligible and human. The defense of democracy is above all the defense of the word; with the falsification of the word everything else is betrayed and trust is undermined at the root. The corruption of the word corrupts democracy: “Since our relationships are regulated by the only way of the word, he who falsifies the word betrays the public society.” Democracy thrives on exchange, dialogue, comparison of opinions; words shape laws, rules, and norms. In a democracy the word substitutes for violence, allowing the peaceful resolution of conflict and making civil coexistence possible. W. H. Auden spoke of the connection between the falsification of the word in the public square and the strife in our streets in 1971. “As a poet—not as a citizen—there is only one political duty, and that is to defend one’s language from corruption. And that is particularly serious now. It’s being so quickly corrupted. When it’s corrupted, people lose faith in what they hear, and this leads to violence.” We are seeing an even more accelerated version of this today, especially in American politics, as social media overflows with images and text that seem to promote a strategy of organized lying: concealment of truth, distortion of the meaning of events, presentation of falsehoods as facts.

In a democracy the word substitutes for violence, allowing the peaceful resolution of conflict and making civil coexistence possible.
sharetweet

There’s also the blatant lying that characterizes much of the Christian propaganda for Donald Trump. It’s used to peddle, misrepresent, or justify just about anything—from his alleged pro-life beliefs to his contempt for scientific (or any kind of) expertise to his attacks on political opponents as godless socialists to his mishandling of the pandemic. There are members of the Catholic hierarchy who have subordinated themselves to Trumpism and the aims of his campaign, going so far as to claim that Trump’s opponent is not a “real” Catholic—and in doing so, have themselves embraced the manipulation of the word. The implications of this go beyond politics. This is further evidence of the failure of establishment Catholicism in the United States, and a betrayal of Catholic intellectual tradition. It represents another step in the metamorphosis of the American Church into something like conservative white Evangelicalism—a Church with the soul of an ethno-nationalist political party—and one whose bonds of communion with the pope and the global Catholic community are conditional.

In this sense the emptying of the word reveals a corruption of the word in religion—which has consequences for Christianity. The post-synodal exhortation Verbum Domini (2010), one of the most interesting documents of Benedict XVI’s pontificate, contains this passage on the sacramentality of the word:

Pope John Paul II had made reference to the ‘sacramental character of revelation’ and in particular to ‘the sign of the Eucharist in which the indissoluble unity between the signifier and signified makes it possible to grasp the depths of the mystery.’ We come to see that at the heart of the sacramentality of the word of God is the mystery of the Incarnation itself: ‘the Word became flesh’ (John 1:14), the reality of the revealed mystery is offered to us in the ‘flesh’ of the Son. The Word of God can be perceived by faith through the ‘sign’ of human words and actions. Faith acknowledges God’s Word by accepting the words and actions by which he makes himself known to us. The sacramental character of revelation points in turn to the history of salvation, to the way that word of God enters time and space, and speaks to men and women, who are called to accept his gift in faith.

Vatican II’s constitution on revelation, Dei verbum, talks about the Catholic understanding of “an inner unity” between deeds and words. Dei verbum describes an idea of revelation in which man is “a creature of dialogue who becomes contemporaneous with the presentness of God and in the fellowship of the word receives the reality which is indivisibly one with this word.” The inner unity between deeds and words is not confined to the Word of God. Fellowship with God and our common humanity assumes a shared fellowship of the word, on the possibility of truthful communication. The difference between a social and anti-social use of the word is the difference between the concept of truth as fruit of inspiration, which is about forging a public covenant with the divine and our fellow human beings, and the idea of conspiracy, whose gnostic undertones suggest a secret knowledge available only to the initiated, and so undermine the possibility of that covenant in both the religious and civic spheres.

The word has a performative quality. But so does the lie—in the secularized liturgies of our political systems and ideological subcultures, and in our ecclesial contexts. We have ample evidence of the damage done by organized, systematic lying in our politics. The impact of it in the Church remains to be seen.