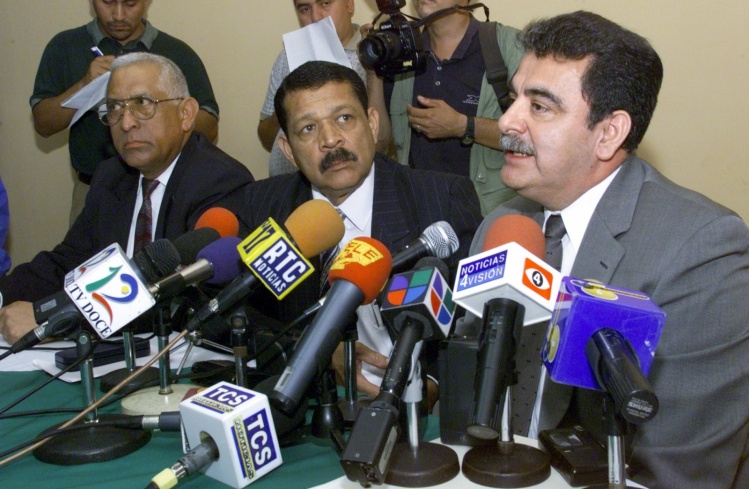 On September 11, a high court in Madrid issued the verdict, more than thirty years in the making, in a remarkable criminal case: Colonel Inocente Orlando Montano was found guilty on five murder counts. Montano was El Salvador’s vice minister of public security on November 16, 1989, when six Jesuit priests and two women were murdered on the leafy campus of the country’s preeminent center of higher education. The audacious murders by the Salvadoran military would mark the beginning of the end of El Salvador’s twelve-year civil war. Also remarkable was the role of Congress, whose dogged pursuit of justice moved the murder investigation in El Salvador forward at critical junctures.

I happened to be in El Salvador at the time, sent by the Lawyers’ Committee for Human Rights to investigate alleged human-rights crimes and U.S.-funded efforts to promote judicial reform. A week before the murders, a U.S. embassy official told me the guerrillas were a small band in the hills, destined to dwindle away to irrelevance within months. And Congress—which had sent both military advisers and, between 1980 and 1991, nearly $6 billion in economic and military aid—had moved on to other matters. The prevailing view was that the U.S. strategy was working. A presentable conservative businessman had assumed the presidency, proving that there was nothing to fear from his far-right ARENA party. Or so the thinking went.

That analysis would be prove to be spectacularly wrong in two ways. First, the Farabundo Martí National Liberation Front (FMLN) was far from contained. Instead, on November 11, 1989, its forces launched a major military offensive: a coordinated attack on the capital of San Salvador. Second, the human-rights situation was far from under control. The Jesuit university, where the priests from the order resided, was adjacent to the Salvadoran military’s high command headquarters and was surrounded by troops two days after the offensive commenced. An elite battalion, trained and funded by the United States, searched the Jesuit residence, where Fr. Ignacio Ellacuría lived with seven other men. The Spanish-born Ellacuría was a world-renowned philosopher and theologian who advocated for negotiating a solution to the conflict. He had even carried messages between the warring factions. Likely the killers’ primary target, Ellacuría was in Spain when the offensive broke out, and had hurried back to El Salvador to continue his quest for peace.

In the early hours of November 16, soldiers forced Ellacuría and four of his brother priests to lie facedown on the lawn, then sprayed them with machine-gun fire. Another priest was killed inside the residence, and a housekeeper named Julia Elba Ramos and her teenage daughter, Celina, were also shot to death. It was Julia’s husband who found the bodies the next morning, and made his way to the nearby residence of the Jesuit Provincial to report what he had seen.

In the early hours of November 16, soldiers forced Ellacuría and four of his brother priests to lie facedown on the lawn, then sprayed them with machine-gun fire.
sharetweet

Days after the murders, I made an appointment to see Fr. José María Tojeira, the young Jesuit Provincial thrust into the forefront of a situation for which no one could prepare. He showed me photographs of the blood-smeared bodies and shared his early attempts to find out who had given the order to kill. When I began explaining what we in the international human-rights community could do to seek accountability, Tojeira quickly shut me down. We don’t want anything special done, he said. They chose to live as Salvadorans and now they have died as Salvadorans. Their deaths will remain unpunished, along with the 70,000 other civilian deaths.

In late November 1989, I made the rounds on Washington’s Capitol Hill, visiting congressional staffers and a few members of Congress who had followed the conflict and were actively engaged in the policy process. It was clear that the brutal killings had reignited interest in El Salvador. In early December, then–House Speaker Thomas Foley appointed seventeen House Democrats to a task force—led by the indomitable Joe Moakley of Massachusetts—to monitor the murder investigation. Perhaps there could be justice for at least eight victims among the many who had died in El Salvador. By my next visit to El Salvador, in early 1990, even Fr. Tojeira had come around to that hope.

I would spend most of the next five years working exclusively on the case, partnering with an international and ever-growing network of Jesuits, human-rights activists, and legal teams. In 1991, two army officers were convicted in a Salvadoran court, sentenced to thirty years, and then amnestied in 1993. But higher-ups who gave the order to kill—reportedly at a meeting at high command headquarters—had not been held accountable. Spain’s international jurisdiction made it possible for San Francisco’s Center for Justice and Accountability to file the Madrid case in 2008, targeting top officers who reportedly had given the orders to kill Ellacuría and leave no witnesses.

The task force led by Rep. Moakley and staffed by an extremely committed and tenacious team of aides issued regular reports that made headlines in both the United States and El Salvador. Their searing honesty made it impossible for the George H. W. Bush administration and the Salvadoran government to cover up the crime and move on.

The trial in Spain unfolded in a greatly altered world. The court proceedings themselves were tailored to the dictates of the coronavirus. And amid the current congressional paralysis and polarization in Washington, Congress’s work on the Jesuit case in the 1990s reminds us of the constructive role elected officials can play in ensuring that human rights remain central in foreign policy. While the members of the Moakley Task Force were Democrats, some Republicans accompanied the group on its trips to El Salvador, and staffers took pains to keep everyone engaged. For Rep. Moakley himself, it was important to include the late Rep. John Murtha (D-Pa.) on the task force. Murtha was known as a conservative former Marine and Vietnam veteran who opposed gun control. His participation—and endorsement of the task force’s findings—would inspire confidence in the Republican ranks.

For the new U.S. Congress that will be seated in January 2021, the murders of six Jesuit priests and two women in a tiny Central American country and the thirty-year pursuit of truth and justice should serve as a timely reminder that human rights should be a guiding principle in any foreign policy. While much has changed, some elements remain constant. The United States continues to exercise influence in Central America, although U.S. policy is now reduced to stanching the flow of immigrants and prosecuting the war on drugs. The Jesuit saga reminds us of just how important it is that human rights remain a core policy principle, and of the potential perils when that is not the case. Equally important, it reminds us of the constructive role our elected officials can play in seeking truth and accountability, both for the actions of our own government officials and for those of our international partners.

Martha Doggett served with the United Nations in Haiti and El Salvador and is the author of Death Foretold: The Jesuit Murders in El Salvador (Georgetown University Press, 1993). Between 2006 and 2017, she headed the Americas Division in the UN Department of Political Affairs in New York.