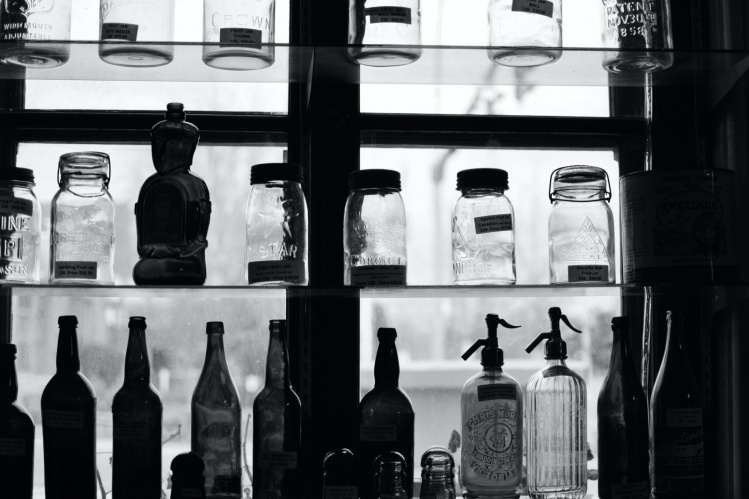 “I spent a lot of time with my bottles, holding them up to the light” (Unsplash / Salome Alexa)

At the age of five, I was appalled to learn that small jars and bottles, emptied of their pills, salves, and sauces, were thrown in the trash. It’s not that I was an early environmentalist. This was the early 1960s—plastic had yet to revolutionize the container world, and “recycle” was barely a word. I was guided purely by my own aesthetic and utilitarian instincts: the exquisite curves of smooth glass, the incontestable usefulness of small containers with screw-on lids. I could not bear the thought of those beautifully molded vessels being tossed in the garbage. There was a site outside of town called the City Dump. I had never been there, but I could still conjure the Stygian horror of such a place.

My indulgent mother didn’t object when I started fishing jars out of the bathroom and kitchen trash cans. At first I wanted only the naturally pristine containers, such as pill bottles. When my mom caught on to my project, she showed me how to clean out food jars, and did it for me when the job proved too gross (which was most of the time).

She also gave me a shoe box to house my collection. I kept it under my bed. I spent a lot of time with my bottles, holding them up to the light, gripping them in different ways. Looking back, I’m not sure what I was doing. But when Mom asked me how I planned to use my vessels, what I wanted to put in them, I was vaguely offended. Wasn’t it enough that they were lovely, and that I had saved them?

I started collecting bottles and jars from the neighbors. I wasn’t very good at articulating why I wanted them, but I was not at all shy about asking. I marched up and rang the doorbell of the Sweet family next door. Mr. Sweet was the editor of the Nebraska City News-Press, and might have written a feature about me if I were ten years older—the civic virtue of my project would have been evident then. As it was, my neighbors were just indulging the whim of the weird kid next door. I went around the corner to the Schrunders, whose endlessly barking dog, Skippy, annoyed the whole block. I avoided the Millers. Bobby Miller was a bully, and would make fun of me at the very least. If my treasure had come within his grasp, I would not have put it past him to smash each bottle and jar, one after another, on the brick sidewalk in front of my house. He was that kind of kid.

I started collecting bottles and jars from the neighbors. I wasn’t very good at articulating why I wanted them, but I was not at all shy about asking.
sharetweet

Even so, my compulsion drove me on. I was saving only a fraction of the wastage! When I returned to my neighbors’ doors a second, then a third time, I sensed their annoyance. I may have radiated a sullen martyrdom myself. I started to broaden my territory, venturing to strangers’ houses two or three streets away.

My collection outgrew first the shoe box, then a second shoe box, and I was given the rare gift of a beer case. But ironically (or perhaps inevitably), the more bottles and jars I collected, the less they pleased me, and the more agitated I became. As my collection overflowed the beer case and the shoeboxes, I lost my ability to be entranced. It was a job, not a passion. The perfect symmetry of a dozen identical baby-food jars left me indifferent. Even the rare midnight blue of the Vicks VapoRub jar, still fragrant with camphor and eucalyptus, failed to please me. When the collection was small, I got a thrill from scrupulously scraping off labels with the pocket knife I knew I shouldn’t have been allowed to use—but even that pleasure had evaporated.

The end of my obsession came the day a harried housewife, interrupted and displeased by my request for her unwanted bottles, thrust something greasy into my hands and slammed the door. It was a torn bacon wrapper. White gobs of fat glistened on the cardboard, and the smell made me ill. From that second onward, I stopped caring about bottles and jars, mine or the world’s. My noble cause became my secret shame. I’d been going door to door asking for people’s garbage, and everyone but me knew it. For months I hid from my neighbors, and I never glanced at my jars again. My mom must have gotten rid of them because at some point the boxes disappeared from under my bed. I repressed the whole sorry episode, and nearly succeeded in forgetting it altogether.

I have made my peace with that time, and can even manage an embarrassed admiration for the proto-conservationist child, driven by compulsions he didn’t understand. These days I keep one small vintage jar on my bookshelf, full of dirt from home. And that would be the sentimental end of this story.

Except there are still times, such as when I see a Starbucks cup on the ground and picture whole rivers of Starbucks cups, or when I spot a crumpled Dasani bottle and conjure mounds of plastic miles long and acres deep. In those moments, a futile rage, the root of all that mad collecting, goes off like a geyser inside me: at what we are doing, at what we have done.

Jon Volkmer’s books include a postmodern travel memoir, a collection of poems about grain elevators, and a young adult biography of Roberto Clemente. He teaches literature and creative writing at Ursinus College.