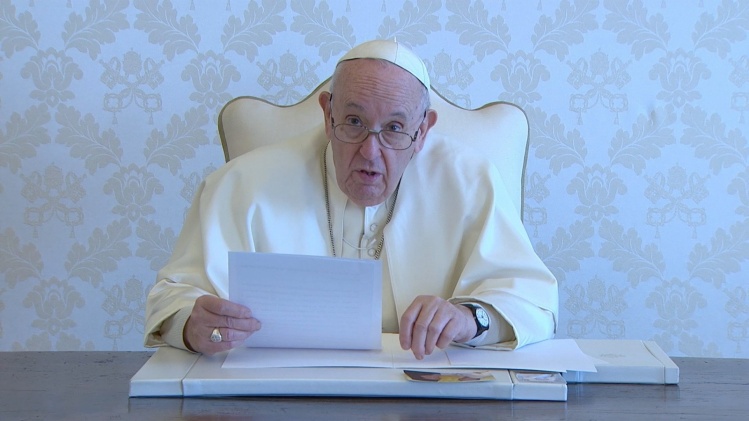 Pope Francis speaks in a video message to an online international conference on “A Politics Rooted in the People,” April 15, 2021 (CNS photo/Holy See Press Office).

Washington and the Vatican established full diplomatic relations only in 1984, which means that Joe Biden will be the first Catholic president to appoint an ambassador to the Holy See. Back in the Reagan years, the selection symbolized not only the anti-Communist alliance between Pope John Paul II and the president, but also the full embrace of democracy by the Catholic Church, a process that had begun between World War II and the Second Vatican Council. Since then, however, something has changed: the relationship between American Catholicism and democracy.

Consider chiefly the failure of the American Catholic hierarchy—from the beginning of the Trump presidency through the January 6 insurrection and even up to now—to elevate its voice in defense of the democratic system and the rule of law. The USCCB and most individual bishops have cast GOP attempts to undermine electoral democracy, voting rights, and the moral duty to the common good simply as mildly unpleasant consequences of political polarization, and not for what they actually express: contempt for public institutions and the democratic ethos at the expense of the political participation of those citizens who most need the protection of the law.

The bishops’ silence is all the more disturbing for what it suggests: a complacency toward, if not an endorsement of, the message pushed by important and powerful Catholic interests in the media, business, and politics supporting the Trumpian assault on democracy. That authoritarian assault has parallels with what’s happening now in Russia, India, and Brazil, and influential American Catholics have greeted it with indifference or, in some cases (such as the anti-liberal turn in Hungary), with delight. You’d have thought this kind of thing would have gone the way of twentieth-century fascism and Francoism. I began studying the history of Catholicism at the University of Bologna in 1989, around the time the Berlin Wall fell. Then, the alliance between Catholicism and democracy felt not only very much of the present, but also of the future, while national Catholic or clerical-fascist movements were part of the past. Today that no longer seems true.

Assessing the history of the relationship between Catholicism and democracy in the last three decades could help in getting a sense of where things stand now, and how they got this way. A good place to start would be with a book published exactly thirty years ago: Samuel Huntington’s The Third Wave, which I think deserves more attention from Catholics. Huntington described global democratization as arriving in three waves: the first in the early nineteenth century, the second after World War II and decolonization in the 1960s, and the third mostly in the 1980s. He saw a correlation between Western Christianity and democracy thanks to the religious roots of the concepts of the dignity of the individual and the separation of the spheres of Church and state. The connection between the expansion of democracy and the expansion of Christianity was no longer Protestant-centered but Catholic-centered. During and even after World War II, the Church’s alliances with authoritarian regimes—especially Franco’s—made Catholicism seem antithetical to democracy. But then came Vatican II. It was one of the major factors in bringing about the “the third wave,” in which Huntington saw the contribution of Catholicism to democracy as decisive. Three-quarters of the countries that turned to democracy during the “third wave” were Catholic or home to an important Catholic majority/minority, including the Philippines, Chile, Mexico, Poland, and Hungary. Catholicism had become a force for democracy through two channels. The first was Vatican II and its “political” message: social change and participation, the rights of individuals, the common good. The second were base-popular movements: Base Ecclesial Communities in Brazil, the Christian Left in the Philippines, grassroots politicization of the Church in Poland, Argentina, and Chile. There was a shift in the position of the hierarchies from accommodation to ambivalence and finally to opposition to authoritarianism. The papacies of Paul VI and John Paul II also played a role; the latter’s apostolic trips (beginning with Poland in 1979) were pastoral visits, but they had a political impact as well.

We have to wonder what remains of Vatican II’s impact on Church-state relations, religious liberty, and political participation.
sharetweet

Huntington saw the Church’s emphasis on the universal dignity of the human person as the catalyst for the trend toward democracy in the 1970s and ’80s. But Catholicism’s contribution on this front was inseparable from the contribution of American capitalism. Huntington acknowledged economics as a significant source of political change: “The logo of the third wave could well be a crucifix superimposed on a dollar sign,” he wrote.

Things have changed in the thirty years since Huntington’s book, at least in terms of what remains of Vatican II’s contribution to the political culture of Catholics. The shift was already evident at the end of John Paul II’s pontificate and the beginning of Benedict XVI’s in 2005, with the rise in Europe of xenophobic and nativist political parties and movements that sought to forge an alliance with Catholic conservatism. True, Vatican officials and bishops’ conferences have spoken out against the new Catholic Right, as the Rome-based American historian Michael Driessen recently pointed out. But the effort has had mixed results. It did not stop Catholics from voting for Matteo Salvini in Italy, Viktor Orbán in Hungary, Marine Le Pen in France, or for the right-wingers in Poland. And if, as Driessen says, “this reassertion of Catholic identity politics was met with evident tension by Vatican officials and bishops conferences across Europe,” there was no such reaction in the United States to the same phenomenon here.

The USCCB is an episcopate that is culturally and theologically a fruit of John Paul II’s pontificate, and, until the 1980s at least, it was receptive of the teaching of the Second Vatican Council on the Church and politics. Now we have to wonder what remains of Vatican II’s impact on Church-state relations, religious liberty, and political participation. The Catholic Church globally is struggling to make sense of the repudiation of liberal democracy, beginning with the heartland of Catholicism in Europe. Even Pope Francis’s political message needs more clarity as it keeps swinging between the language of “inclusive populism” and the politically more evocative concept of “popularism”—something evident in his April 15 video message, “A Politics Rooted in the People.” But there is no doubt about Francis’s rejection of authoritarianism and his awareness of the dangers in the return of authoritarian leaders. There’s also no doubt whose side he’s on when it comes to the defense of democratic institutions and the political participation of all people. The position of the USCCB is not as clear, and thus raises questions about the strength and seriousness of its commitment to our democratic institutions in these anxious times. The Church’s competence in teaching on political matters is limited. But is it beyond the competence of the Church to defend the right of the people to vote?

The increasingly extremist contempt for democratic institutions is not uniquely Catholic. But it has affected our clerical leadership, and finds facile justification in the fact that there is a tendency in modern democracies to downplay or deny the relevance of the Christian tradition and of religion more generally. It seems a long time since Catholicism’s embrace of the democratic ethos was supported by the liturgical and magisterial symbolism of Vatican II and of the new institutions of Church governance created or sanctioned by the council. The national bishops’ conferences were much more than a new administrative body; they became a model for a non-monarchic, non-authoritarian way of governing the Church. But the pontificates of John Paul II and Benedict XVI weakened the authority of the bishops’ conferences vis-à-vis the Vatican. This also weakened the bishops’ sense of themselves as a collegial body, of their role as representing the Church in matters both ecclesiastical and ad extra—in some countries more than in others.

The inability to open a synodal process in the US Catholic Church deepens the crisis of ecclesial governance, but it also reflects the ambiguity of the bishops’ stance on the crisis of democracy. It’s in this context that the Biden administration chooses a new U.S. ambassador to the Holy See. A president obviously has no influence on ecclesial synodality; a president can’t unite the Catholic Church. But Biden’s choice of ambassador can certainly send a signal about what kind of Catholic political culture this administration intends to support.