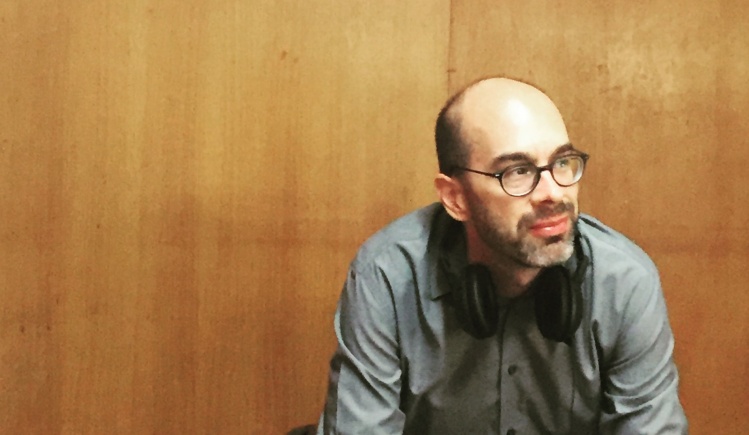 The title poem in Michael Robbins’s 2012 debut collection, Alien vs. Predator, opens like that runaway bus from Speed:

Praise this world, Rilke says, the jerk.
We’d stay up all night. Every angel’s
berserk. Hell, if you slit monkeys
for a living, you’d pray to me, too.
I’m not so forgiving. I’m rubber, you’re glue.

Everything comes at you fast, fast, fast: the references (the opening line alludes to both Rilke’s Duino Elegies and Berryman’s Dream Songs); the clipped syntax; the shifting music (from internal rhyme—jerk/berserk and living/forgiving—to end rhyme: too/glue). Things never really slow down. The book’s last quatrain opens, “I take this cadence from the spinning plates / where the DJ plots the needle’s fall.” It’s that sense of spinning plates, a velocity that threatens to go out of control but doesn’t quite, that makes for the particular brilliance of Robbins’s angry, antic first book.

What a striking difference from the rhythm and feel of Walkman (Penguin Books, 80 pp., $20), Robbins’s third poetry collection. Here is how the title poem, the book’s opener, begins:

I didn’t mean to quit drinking,
it just sort of happened.
I’d always assumed
it’d be difficult, or not
difficult, exactly,
but impossible.

Meter and rhyme are largely gone, as is, at least by comparison, the hyperactive allusiveness. The meandering self-corrections (“or not / difficult, exactly, / but”) recall the Eliot of Four Quartets, and the poem’s observational rhythms echo James Schuyler, the New York School poet who is named later on:

Schuyler was too tender
for me then, but now
he is just tender enough.
I love his wishes.
That “the beautiful humorous
white whippet” could
be immortal, for instance.
But I can’t always forgive
his Central Park West tone,
his Austrian operettas
and long long lawns,
though he wasn’t rich
and was tormented
enough, God knows.

There’s a weary maturity to these lines. The speaker’s stance towards Schuyler has shifted from skepticism to love—a love that is qualified (“I can’t always forgive”) before that qualification is itself softened. Alien vs. Predator displayed a confidence born out of bravado; Walkman displays a depth born out of experience. The speaker has lived through things: the end of romance (“You Haven’t Texted Since Saturday,” one poem is titled) and the death of heroes (“It’s terrible here, Prince still dead / in purple raiment”); crises of capitalism (“The trinity— / capital, land, labor— / falls apart. The auction / cannot hear the auctioneer”) and crises of faith (“Mostly I fear the fools / are right. Doubt’s part of the game, / says Mother Kate”).

Language still riots, but these poems offer the record of a lonesome, sad, at times hopeful soul.
sharetweet

This isn’t to say that the rage of Robbins’s earlier work is gone. “We could do with a few / more tantrums,” he says in “The Seasons,” and Walkman is filled with indictments of bad theology and worse political economy. Robbins’s quicksilver wit hasn’t abandoned him, either, even if it’s given less free rein. Walkman does have radically new notes, though. The tone is, like Schuyler, more tender. Language still riots, but these poems offer the record of a lonesome, sad, at times hopeful soul. Alien vs. Predator borrowed the beats of hip hop: “I take it, and I give it back again,” that book ends, “to the dollar dollar bill and the yes yes y’all”.” Walkman sounds like country music. “There is only one prayer,” Robbins writes. “Lord, / how do I get out / from under.”

[O]ne of the real pleasures in his collection of essays, Equipment for Living: On Poetry and Pop Music (2017), is how Robbins tunes us into form as if for the first time. Nas is still there, but so is Dom Gregory Dix going all pre-Nicene in The Shape of the Liturgy. Cheech, Chong, Walter Ong. What are these fragments he’s Jersey Shored against our ruin?

That linguistic playfulness, T. S. Eliot mixing it up with Snooki, is typical of Devine’s method, as is his blending of aesthetics and theology. (In one section, he puts John Donne in conversation with Kendrick Lamar.) Sometimes the writing resembles prose, sometimes poetry, often something in-between. He hops from subject to subject—Pop Art to pop music, Warhol to Berryman to Carson and back again—following echoes of language and concept more than a single argument. He’ll start off with Milton’s “Lycidas” and then slide into a Blues Traveler lyric: “His gory visage down the stream was sent. It’s hard to remember: the hook brings you back, I think is all that Milton ever meant.”

Devine is being cheeky here: surely Milton’s elegy means more, or at least differently, than the hook from a pop song. But he’s also being serious. Pop songs work by repetition (the hook), as does Pop Art (Warhol’s soup cans), as does lyric poetry (meter and rhyme). Riffing on Robbins’s notion of poetry and pop as “equipment for living,” an idea that is itself borrowed from the critic Kenneth Burke, Devine argues that aesthetic form offers a stay against the darkness. Repetition refuses silence; it pushes back against loss. “Is there a better definition of art? It’s a way of enduring.”

In “Repeat Until Time,” Hannah Sullivan argues for the allure—that is to say, the endurance in attention and memory—of form that doesn’t quite hold. “Failed form,” she writes, “is hectic with loveliness, and compels us longer.” Failed form isn’t the same as formlessness, and Sullivan’s debut collection, Three Poems (Farrar, Straus and Giroux, 80 pp., $9.99), uses the ghost of form, its not-there-but-not-not-there presence, to excellent effect.

As its title suggests, the book consists of three long poems. “You, Very Young in New York” is about, well, being very young in New York. Using the second person, the poem describes the excitements and boredoms, exhilarations and routines, of living in the city: “You stand around / On the same street corners, smoking, thin-elbowed, / Looking down avenues in a lime-green dress / With one arm raised, waiting to get older.” The poem’s action is iterative, a catalog of things done and done again: “listening to Bowie in bed,” working in an office “addressing inefficiencies in online processes,” “meeting...for Pisco sours at the Peruvian dive bar,” having bad sex and then wanting to have it again.

The poem opens with eight stanzas of terza rima—itself a perfect choice for rendering sameness-with-difference. (Terza rima’s interlocking tercets carry the rhyme at the center of one stanza into the first line of the next: aba, bcb, etc.) Sullivan then shifts into stanzas of varied length and complexity, often couplets but also quatrains and other, longer verse-paragraphs. Failed form indeed: once we get used to one pattern, it’s undone and a new one begins. As a result, the poem feels both tight and languorous. It has moments of intense compression, as in this couplet: “CTRL + N is jammed in the spreadsheet of your mind, / Nothing seems real or right, so you just press send.” And it has moments in which language lazily wanders, as in one four-line sentence beginning, “The thing about being very young, as you are, is the permeability / Of one person to another, so when the guys buying sangria say....” Sullivan captures “the usual assays on innocence” felt in the city—experiences that simultaneously feel usual and brand new.

The collection’s other two poems, “Repeat Until Time” and “The Sandpit After Rain,” are just as strong. The speaker has a child—something that feels totally singular even though it’s just about the most done thing there is. The speaker loses a father—as, in the end, we all will, even if it feels to us like no one ever has before. Pattern and novelty, repetition and difference. That’s what life feels like, whether you’re young in the city or a little older in the maternity ward. That’s how good poetry works when you’re in the hands of a craftsperson like Sullivan.