From Collegiality to Synodality 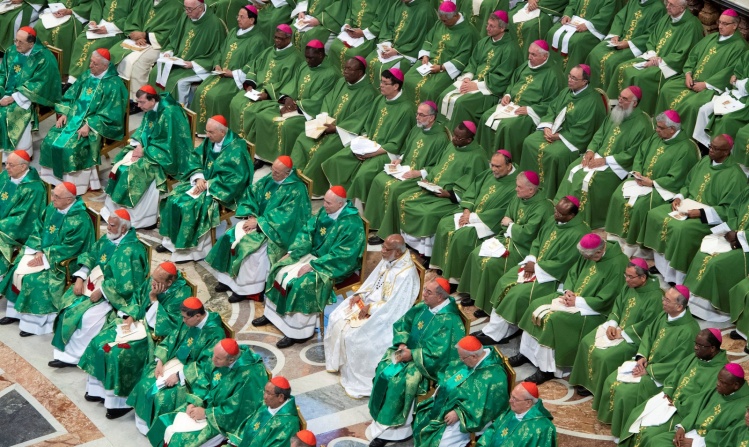 Cardinals and bishops attend the closing Mass of the Synod on Young People (CNS photo/Claudio Peri, pool via Reuters)

On October 17, while the bishops’ Synod on Young People was underway, the Jesuit-run and Vatican-vetted magazine Civiltà Cattolica published the transcript of a dialogue between Pope Francis and the Jesuits he met during his trip to the Baltic States in late September. One passage from the pope’s remarks stands out.

What needs to be done today is to accompany the church in a deep spiritual renewal. I believe the Lord wants a change in the church. I have said many times that a perversion of the church today is clericalism. But fifty years ago the Second Vatican Council said this clearly: the church is the People of God. Read number 12 of Lumen gentium. I know that the Lord wants the council to make headway in the church. Historians tell us that it takes a hundred years for a council to be applied. We are halfway there. So, if you want to help me, do whatever it takes to move the council forward in the church. And help me with your prayer. I need so many prayers.

This remark exemplifies the situation of the church under Francis’s pontificate. After three pontificates that were more concerned with controlling excesses and extravagances in the implementation of the council than with deepening its reception and application, Francis is trying to unleash the potential of Vatican II in a church and a world that are both, in certain important respects, post–Vatican II. This is both the hope and the constraint of Francis’s pontificate.

Fifty years after Vatican II, Catholicism has moved beyond it. Some Catholics simply take for granted what Vatican II said and did—seeming to forget how much and how quickly the church has changed in a few decades—and demand further progressive developments in both doctrine and discipline. Other Catholics want to roll back the reforms of Vatican II for a more traditionalist version of Catholicism.

Vatican II either ignored or failed to anticipate some of the most controversial issues within today’s church. For example, the council never addressed the issue of married priests (one of the issues withdrawn from debate by Paul VI) and the role of women in the church’s ministry and governance (Vatican II took place too early for this). From an ecclesiological perspective, Vatican II was a victory for both the papacy and the episcopate at the expense of the lower clergy and the religious orders, with some consolation prizes for the non-ordained in a “theology of the laity” that is largely pre-Vatican II. The council counted on the episcopate to lead church reform, but the history of the abuse crisis tells a story of systemic failure on the part of the bishops.

The trend toward greater and greater centralization within the church is finally beginning to reverse itself under Francis.
sharetweet

At Vatican II, the reconciliation of Catholicism with modernity presupposed a respectful relationship between religion and politics, church and state. It assumed a papacy and an episcopate firmly in control of the ecclesiastical hierarchy and of the laity. There could be no starker difference between the vision of Vatican II and the current situation than on this point. Today many Catholics do not feel at home either in their political community or in their church. They are without a Catholic party or a political culture they can relate to, and many of them no longer feel that they and their children are safe in the church. The cooperative relationship between church and world imagined by Vatican II was a development of the “ecclesiology of the two swords” (church and empire) that assumed a degree of internal cohesion and control within both the church and the political realm—a system that found its most perfect realization in the instrument of Concordats between the Holy See and secular authorities in the nation states. That parallelism between church and state has been radically redefined by globalization and the replacement of traditional elites with technocrats. Neither governments nor the institutional church are in control of the flow of information in the way that they once were. And the media and media platforms that are in control of that flow feel no obligation to protect the church or cooperate with it. There is no possible Concordat between the Holy See and the media—included a Catholic media system that no longer sees itself as constrained by loyalty to a legitimately elected pope.

As Francis reminds us, “Historians tell us that it takes a hundred years for a council to be applied. We are halfway there.” This was certainly true for Trent, in an age when it took the average diocese about a century to build a seminary, and it was more or less true for Vatican I. (It is not an accident that the major crisis for papal primacy came with Paul VI’s encyclical Humanae vitae in 1968—almost exactly one century after Pastor aeternus). But then, Vatican II was importantly different from those councils in various ways— especially in the new kind of conciliar teaching it offered and in its recognition that Catholicism was becoming truly global. The world seemed to be changing faster than it used to, and so did the church.

All this is part of a dramatic power shift in the church and in the world. Vatican II took place before the social and cultural upheavals of the late 1960s and 1970s. Francis seems more attentive to developments in the post–Vatican II period when it comes to ad extra issues (such as social justice, ecumenism, and interreligious dialogue) than when it comes to ad intra ones (especially the role of women in the church). For this second category of issues, Francis’s teaching is restricted by the limits not only of the final documents of the council, but also by the limits of the theology of Vatican II—for example, the ecclesiology of Yves Congar.

The real asset for Francis in overcoming these objective and subjective limits is synodality, which is a word that is nowhere to be found in the corpus of Vatican II, where the operational word for dialogue in the Church is “episcopal collegiality”—which obtains only among the bishops and between them and the pope. Synodality—a fundamental dimension of the church involving the whole people of God and at all levels (universal, continental, national, diocesan, parochial)—is truly a post–Vatican II theological and magisterial development. It is a remarkable fact that until 2013 the Bishops’ Synod was synodal in name only. It was created by Paul VI as an expression of episcopal collegiality, not of the synodality of the whole church.

At the same time, synodality is the most important institutional reform of Francis’s pontificate. The role of the Bishops’ Synod has changed, and synodality at all levels of the church has been encouraged as never before. Whatever the upcoming apostolic constitution reforming the Roman Curia will say, there is no question that the Curia has played a marginal role in this pontificate—much more marginal than its role in any prior pontificate. The trend toward greater and greater centralization within the church is finally beginning to reverse itself under Francis.

The real parallel here is with the pontificate of John XXIII, the pope who was elected sixty years ago, in October 1958. When John XXIII called for the Second Vatican Council, most expected that its function would be to complete the work of the First Vatican Council: but Vatican II turned out to be a very different in kind. In a similar way, Francis is appealing to the council in order to open the way for a synodal Church that was not quite born at Vatican II, but was theologically conceived there. Bergoglio is a product of conciliar Catholicism and at the same time the first post–Vatican II pope. He was elected as successor of Benedict XVI, who engaged in a critical reexamination of the legacy of Vatican II—an effort that produced disturbing effects in the theological and ecclesiological culture of so-called conservative and traditionalist Catholicism. In just a few years, the papacy went from a defense of Vatican II as a “a sure compass to guide the course of Peter’s barque” (John Paul II’s words), through a period under Benedict in which Rome indulged traditionalist dissent from Vatican II, to the current pope’s embrace of post–Vatican II synodality. Francis’s emphasis on synodality bridges the gap between his Vatican II theological culture and the new horizon of post-conciliar global Catholicism. It is a bridge that he cannot cross alone.