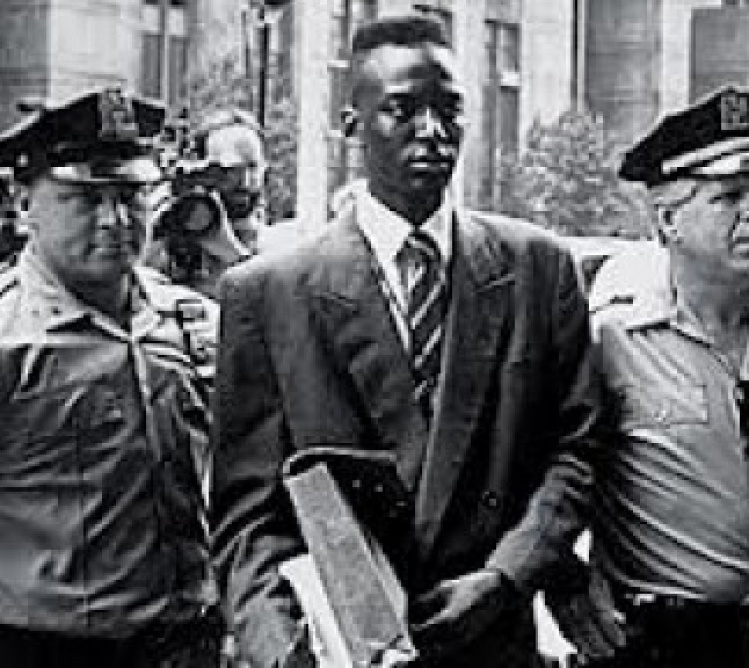 Most Americans forty or older will recall the 1989 case of the young woman brutalized by a rampaging mob of teenagers while jogging in Central Park. Coming amid soaring crime rates, the attack spawned a scary neologism, “wilding,” and mass public revulsion that took on a racial tinge when five black and Hispanic teenagers quickly confessed. I recall the news images of teenaged males being hustled out of police stations, heads down; like nearly everyone else, I shook my head at how depraved they were, and how guilty.

Except that they were not.

A joint effort of famed documentarian Ken Burns and his daughter, Sarah, The Central Park Five shows how five young American males of color were railroaded into confessing to a crime they didn’t commit. In extensive interviews all five, now in their thirties (one declines to appear on camera but provides off-screen commentary), recount being held overnight without food or sleep, alternately badgered and reassured by detectives who promised that if they implicated other members of the group in the crime, they could “go home.” Eventually all five caved in. It was a textbook case of faulty interrogation techniques. “The goal is to break the suspect down to helplessness and despair,” comments a psychologist expert in coerced confessions. “Once the confession is taken, it trumps everything else.” All five quickly recanted their confessions, but it was too late.

Burns père et fille channel the toxic zeitgeist of late-1980s New York. The revolution in financial services was well underway, and a city long in decline suddenly acquired a new über class of wealthy young traders and analysts—the victim, a young investment banker, belonged to this new golden elite—even as a crack-cocaine epidemic among its underclass had driven violent crime to record levels. Following soon after the notorious Bernhard Goetz subway shooting, the Central Park jogger attack revealed these tensions, bringing to the surface a pervasive but not fully articulated social narrative that had been percolating for some time among the city’s dominant classes—that of wild young black men preying on innocent white people—and energizing privileged whites to rare displays of vehemence. “This was a proxy war,” recalls New York Times reporter Jim Dwyer. The five teens, it is clear in hindsight, didn’t stand a chance.

Perhaps scariest of all is the fact that, apart from active malfeasance by some investigating detectives, everyone involved, whether prosecutors, press, or outraged citizens at large, seems to have honestly believed the five were guilty—a mass groupthink that powered a rush to judgment. The Central Park Five presents a heuristic thought experiment in what cognitive psychologists call confirmation bias. As long as you assume the five must be guilty, then their confessions seem damning; assume, however, that they might well not be guilty, and suddenly all sorts of flaws and contradictions appear.

No one who mattered, however—either in the justice system or among politicians and the press—made this crucial assumption. Indeed, so resistant to correction were the prevailing biases that even when a convicted rapist and killer stepped forward, years later, and confessed to the crime (a confession confirmed by DNA and a pile of corroborating details), many cops, prosecutors, and press pundits refused to back down, even in the face of overwhelming evidence; and in 2002, when Manhattan District Attorney Robert Morgenthau, acknowledging “troubling discrepancies” in the original confessions, reversed course and agreed to let the convictions be vacated, he was reviled by many.

As for the Central Park Five themselves, to a man they come across as gentle souls, remarkably free of bitterness although clearly harrowed—fully aware of the price they paid in lost years. Most moving to me was the 1989 videotape showing the eldest suspect, sixteen-year-old Kharey Wise, making his confession; continually rubbing his face and eyes, as if willing himself to wake from a nightmare, he presents the desperate aspect of a young man who knows he’s digging a hole, but can only dig further. In prison Wise stopped going to his own parole hearings, knowing that the prime condition of early release—admitting remorse for a crime he didn’t commit—was the one he would never agree to meet. His and the others’ obdurate refusal to renounce their innocence, even with freedom at stake, testifies eloquently to the deep human need for justice. When asked by the filmmakers to recall his reaction on learning, after thirteen years of incarceration, that his conviction had been overturned, Wise tears up. “It just felt so…good,” he says.

An equally powerful reflection on class has been fashioned over recent decades by British director Michael Apted, whose 7 Up series charts the lives of fourteen Britons first captured on film as seven-year-old schoolchildren, way back in 1964. Every seven years Apted (whose mainstream accomplishments include Coal Miner’s Daughter and the James Bond film The World Is Not Enough) has checked back in with the group, updating viewers on the lives of “the TV kids,” as they are known to fellow Britons.

The premise of the original television documentary was simple: Let a range of children express their hopes for the future, and they will reveal the fundamental power of class to shape, and limit, personal destiny. And so, over shots of the children playing in the schoolyard, the film’s narrator intoned the Jesuit motto: “Give me a child until he is seven, and I will give you the man.” Yet what started off as an attempt to demonstrate a sociological point—the hidebound nature of class in Britain—has become something much larger and far less dogmatic.

If you haven’t tuned in to any of the prior seven installments, don’t worry; Apted skillfully weaves earlier episodes into the current one, using deft cuts to present startling, sometimes amusing biographical juxtapositions over time, as when Suze is captured as a chainsmoking, alienated twenty-one-year-old, vowing never to have children—and then, in the next frame, at twenty-eight, with a squalling baby in her arms. The earliest interviews highlight sociological extremes, contrasting the film’s three posh boys—singing “Waltzing Matilda” in Latin, earnestly reeling off which Oxbridge college they will attend years hence—with a trio of carefree chuckling girls from East London, or with two somber, wide-eyed boys in a “charity home,” wariness lowering their voices to a whisper.

In one sense, the film’s premise has held up; the working-class kids became working-class adults, the children from educated families are educated professionals. But the portraits Apted creates make clear that these arguably preordained destinies are not the only, or even the most important, thing about his subjects’ lives. Seen over the arc of decades, these lives show us that happiness—in marriage, with work and children, and above all with oneself—is by no means an exclusive property of the propertied classes. Above all, they reveal the enduring and crucial role played by temperament. Happiest of the lot is the irrepressible Tony, a scrappy Cockney kid who fails as a horse jockey and ends up a lifelong cabby; successfully negotiating an at-times difficult marriage, he works hard, saves money, buys a vacation time-share with his family in Spain, and lives with grateful gusto from one laugh to the next. “I’m a very very lucky man,” he says; “I know I am.”

The most moving story is that of Neil, a dreamily imaginative child who by 21 Up had dropped out of university to do manual labor, and by twenty-eight was homeless and clearly mentally distressed. The arc of his life at that point looked so ominous—when asked what he saw for his future, he commented grimly that he expected to be dead—that it is a surprise and relief to find him, decades later, scraping out an existence as a town councilor and a lay priest in a small town in Cumbria—eccentric, to be sure, and somewhat embittered, but still here.

If 56 Up is less captivating than earlier installments in the series, it’s perhaps because life itself is less interesting at fifty-six, or at least less open to change, than it was at thirty-five, when major decisions and outcomes still hung in the balance. If, like me, you’re just a few years younger than the film’s subjects, you may find yourself unsettled by the distinct impression that they don’t anticipate much more happening in their lives. Perhaps this is a difference between Britons and Americans—their muted expectations and resigned good cheer versus our fantasy of perpetual vitality and renewal. Whatever the case, we can thank Apted’s group portrait, extended now over half a century, for giving us a coveted window on human development, and in the process quietly building up a majestic achievement in documentary cinema.