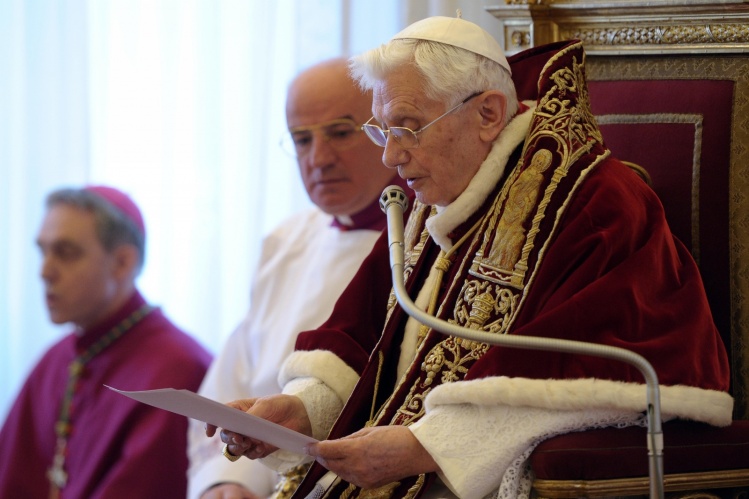 Pope Benedict XVI reads his resignation in Latin during a meeting of cardinals at the Vatican in this Feb. 11, 2013, file photo. There were no media members in attendance. (CNS photo/L'Osservatore Romano)

The last pope to resign did so more than seven hundred years ago, which is a long time even by church standards. The controversy surrounding Celestine V’s abdication and the succession of Boniface VIII did not recommend the practice to later popes, and while canon law admitted the possibility a pope could resign, there were many who thought that, like those old disputes about what the church can do if a pope becomes a heretic, it was best consigned to ancient history, no longer applicable. This view was confirmed by a very modern theology and even mystique of the papacy that so identified the pope with Christ as to suggest that for him to resign would be to betray Christ. It seems that Pope Paul VI gave some thought to resigning, but a close adviser said that he wouldn’t because “he cannot come down from his cross.” Similar words were applied to Pope John Paul II as the church watched him fade away: “You don’t come down from the cross,” his former secretary said just the other day. It is not surprising, then, that many Catholics were stunned by Pope Benedict XVI’s act: “Can a pope resign?” one of my sisters telephoned to ask me.

There is potentially great significance in Benedict’s action, and it may be that his resignation will be his greatest contribution to ecclesiology. He has so subordinated his person to the office that he could renounce it. His frank admission that he no longer had the strength of mind and body needed for the Petrine ministry not only humanizes the pope himself but helps bring the papacy back within the church, down from what Hans Urs von Balthasar called its “pyramid-like isolation.” All those unique titles that seemed to place the papal office above and beyond all other offices and ministries in the church suddenly have to yield to what their occupants all have in common: a fragile, sinful, and mortal humanity. The pope—and not just this one—loses something of his sacral apartness. He rejoins the rest of us.

Benedict’s action also suggests the thought that if a pope can resign for reasons of health or of age, he might resign for other reasons too. There could come a pope who agrees with what John Henry Newman wrote in 1870, during the longest pontificate in church history: “It is not good for a pope to live twenty years. It is anomaly and bears no good fruit; he becomes a god, has no one to contradict him, does not know facts, does cruel things without meaning it.” In other words, even though no term limits may be assigned to the papal office, a pope can have his own term limits in mind, and say to himself, and to the church, “Basta!” If papal resignations were to become something normal (that is, more frequent than every seven hundred years), then there might be less reluctance to elect someone younger and still energetic without worrying that he will fall victim to the tendency Newman feared.

Benedict visited at least twice the basilica where Celestine V is buried and prayed at his tomb. Paul VI had done so beforehand, and I wonder whether Benedict might have remembered his predecessor’s explanation of why Celestine resigned: “After a few months he understood that he was being deceived by people around him who were profiting from his inexperience.” That’s when Celestine’s holiness shone out, Pope Paul said: “As he had accepted the supreme pontificate out of duty, so out of duty he renounced it—not out of cowardice, as Dante wrote (if his words really do refer to him), but out of heroic virtue, out of a sense of duty.” Perhaps Benedict also felt betrayed by people around him and recognized that he was not up to dealing with it.

One didn’t have the impression that Joseph Ratzinger enjoyed being pope. He was the second pope in a row not to take much interest in administration, but whereas John Paul II seemed always on the road, exhibiting the most personalized papacy in church history, Pope Benedict retreated into his study, where he composed not only his official homilies, speeches, and encyclicals, but also three books, which he explicitly exempted from official authority. The result of this approach to the office—call it the two “vacancies” of papal responsibility—has been not only the sort of unedifying spectacle of curial rivalries we saw in the “Vatileaks” scandal, but a return to, and even heightening of, the centralized theory and practice that many had hoped Vatican II would bring to an end. Instead, after modest efforts at institutionalizing the council’s ecclesiology, we have seen over the past forty years the atrophying of structures for co-responsibility and cooperation at every level of church life.

A certain paradox is visible in the events now unfolding. The very act that humanizes the papacy also produces the hullabaloo over the upcoming conclave, which tends to reconfirm the inflated notion of the Petrine office that has developed over the past two hundred and fifty years, and the impression is given, once again, that the future of the church hinges on the choice of a successor to the See of Peter. One can hear it from both sides: from traditionalists who want still-tighter disciplinary control over doctrine, worship, and practice; and from progressives who want a pope who will loosen things up in all those areas. They both want something from Rome; they want the new pope to do something about what they each perceive as critical points. But the church is not the pope, and the pope is not the church, and perhaps what we most need is a pope who will encourage and allow the laity, the religious, the clergy, and the hierarchy to assume their responsibilities for the difference the church is supposed to make in the world. Benedict’s resignation was a self-denying act of personal humility. What we need now in Rome are acts of institutional humility and self-denial.