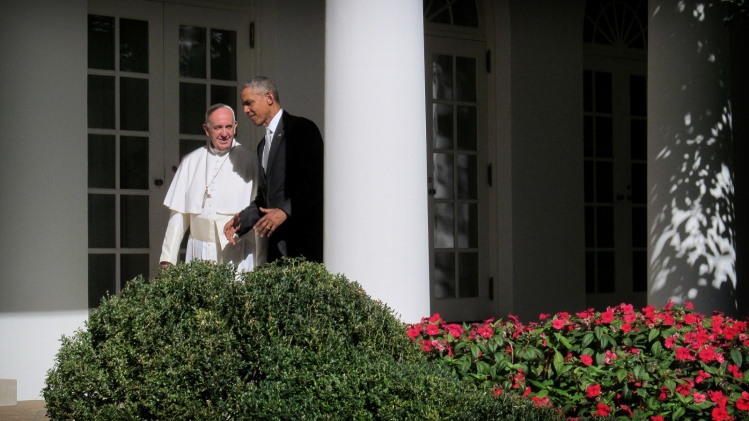 If President Barack Obama had to deal with the “birther” issue, Pope Francis has had to deal with something similar: theories according to which international machinations forced Benedict XVI to resign or that the conclave of 2013 was rigged. Some Italian Catholic journalists, close to the right in Italy (such as Antonio Socci), began voicing these theories not long after Francis’s election. Then, just on March 7, Monsignor Luigi Negri, since 2012 the archbishop of Ferrara (the diocese where I spent thirty years of my life until I moved to America) added a new twist: that on top of it all, the Obama administration was involved.

In an interview given to the online newspaper Riminiduepuntozero, Negri said: “It is no coincidence that in the United States, on the basis of what has been published by Wikileaks, some Catholic groups have asked President Trump to create a commission of inquiry to investigate whether the administration of Barack Obama has lobbied Benedict XVI into the resignation. It remains for now a serious mystery, but I am sure that [those responsible will be identified]… When the time comes, the first question I will ask St. Peter’s will be on this issue.”

You’d think that the press office of the Holy See would have some reaction to this. But, as with the resignation of Marie Collins from the Pontifical Commission for the Protection of Minors, it was once again silent. A charge like Negri’s, suggesting that the resignation of Benedict XVI was not free and therefore not valid and thus implying that Francis is not the legitimate pope, would typically be met with a statement from the press office, regardless of how reluctant the Vatican might be to discipline a sitting archbishop (just for a few more weeks: Francis accepted his resignation soon after Negri turned seventy-five). On March 8, a day after Negri’s comments, former press office director Fr. Federico Lombardi issued his own long and Jesuitically witty statement denying the allegations.

After Negri’s interview was analyzed by other Catholic news media outlets, Breitbart News in Rome ran a story mixing the archbishop’s comments with details related to the WikiLeaks releases on the U.S. Democratic Party. One day after that, Breitbart’s man in Rome, Thomas Williams, reported the only statement from anyone in any way affiliated with the Vatican—that is, the denial from the retired Lombardi.

Negri’s charges say something about the circle of prelati and journalists who feel orphans of the previous pontificate, yet nevertheless among whom it’s hard to tell who the real friends of Joseph Ratzinger are. Moreover, one can imagine that an American journalist like Greg Burke, the present director of the Holy See press office, understands the importance of countering conspiracy theories, yet apparently not those coming from an archbishop who has direct access to Benedict XVI and tries to undermine the legitimacy of the conclave and Francis.

Also worth considering: If there is no systematic alliance between Steve Bannon in the White House and the opposition to Francis in the Vatican and the United States, there are the shared tendencies toward Islamophobia and a fondness for conspiracy theories. The extreme wing of Francis’s opposition has raised the spectre of missing ballots at the conclave; of secret maneuvering to ensure that Benedict’s was a short-term pontificate; of a rigged bishops’ synod in 2014-2015 (see the book by the National Catholic Register’s Edward Pentin). And now Obama is said to be behind it all.

Monsignor Negri clearly speaks for himself and a few others only. But it’s difficult to consider the traditionalist opposition against Pope Francis without also considering the constant attempt to delegitimize Obama—not just the conspiracy theories, but also the “I want my country (my Church) back” sentiment. I am not inclined to see political-ideological alignments between American politics and Church politics, especially for a pope like Francis. But it’s hard to deny that the opposition against the first African-American president has a lot in common with the opposition against the first Latin American pope.