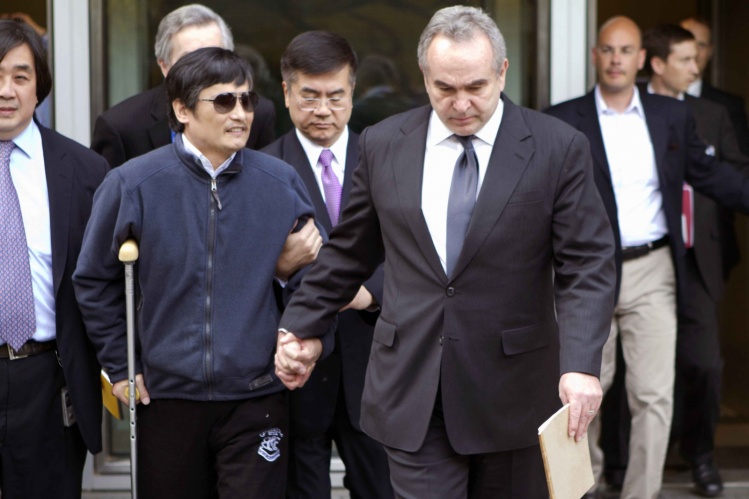 The term “barefoot lawyer” echoes that of the “barefoot doctors,” whose rudimentary medical training in Mao’s China was able to bring at least some elements of health care to an impoverished countryside. “Barefoot lawyers,” on the other hand, are those who have acquired some knowledge of the law by themselves, and have used it to defend rural Chinese against the depredations of officialdom. These can take many forms of course, including illegal taxes and land seizures, or looking the other way as factories, refineries, mills, and so forth pollute China’s air and waters, sometimes destroying rivers and lakes, often spreading disease as they do so. Chen Guangcheng’s start as an activist came when a large new paper mill, near his poor village of Dongshigu in Shandong Province, managed to make useless the river that had earlier provided water for drinking, bathing, and irrigation. Protests led nowhere, but Chen’s energy and ingenuity helped gain a British grant enabling the village to sink a well to bring it fresh water.

Despite being blinded for life by an illness at the age of two, Chen had managed to educate himself sufficiently to become a thorn in the side of the establishment, as he came to realize the enormous gap between the promises of state and party constitutions about people’s rights and the actual practices of officials. His readiness to air his grievances in the media, both foreign and (where possible) Chinese, made him an object of suspicion to the authorities, and his appearance on the cover of Newsweek International in 2002 and his participation in a State Department–sponsored month-long visit to the United States in 2003 only made matters worse.

That visit also introduced him to Jerome Cohen at NYU Law School, one of the pioneers of the study of Chinese law in this country. By then Chen had married an enterprising young woman from a neighboring village (against her parents’ wishes). It was roughly then that his interest in human rights led him into protesting the widespread practices of enforced abortions and sterilizations that, in some places, had become routine under China’s Family Planning Law. The West knows this as the “one-child policy,” though that is a bit of a misnomer since there are several exceptions to it—for national minorities (i.e., non-Han Chinese) and, of course, for those rich and influential enough to avoid it. Chen’s attempt to bring a legal case on behalf of a friend in Dongshigu brought pressure from local officials, but far worse was his ability to publicize government wrongdoing not only beyond his village, but beyond China itself. In 2005 the Washington Post ran a story about Chen and about the iniquities of forced family planning. That led to Chen’s kidnapping, torture, trial, and a sentence of over four years in jail, and even after he’d served that and was returned to Dongshigu, he and his family were kept under house arrest.

With the help of his courageous and resourceful wife, he eventually managed to escape in 2012, making his way to Beijing and ultimately to the U.S. embassy. As luck would have it, Secretary of State Hillary Clinton and Treasury Secretary Timothy Geithner were about to arrive for talks. His account of the tense days of discussion and diplomacy that followed is straightforward enough. We are, however, only given Chen’s side of the story. According to Chen, American officials, including Clinton herself, were anxious to make a deal with Beijing. They wanted him out of the embassy if the Chinese government would promise to allow him to continue his legal studies in China, free from harassment. Not surprisingly, Chen was reluctant to trust any such agreements. Although he would have preferred to stay in China, he and his immediate family were eventually allowed to leave. Once in the United States, he took up a year’s residency, arranged by Jerome Cohen, at NYU Law School.

There the book ends, and no reader could fail to be impressed by Chen’s courage (to say nothing of that of his wife) and his willingness to stand by his principles even when arrested and repeatedly beaten. Over and over again he insists that all his actions in China were legitimate under both party and government constitutions, and that it was the officials themselves who violated the law. His view on the weakness of China’s civil society and of the state’s unwillingness to allow the existence of any organization it does not control is well worth reading (though it’s also worth noting that this characteristic long predates the coming of communism).

Sadly enough, Chen’s story does not quite end there. He accompanied his departure from NYU in 2013 with unfortunate charges that the university was succumbing to pressure from Beijing because the university was opening a new campus in Shanghai. Today he and his family live in Washington, where he’s a visiting scholar at the Catholic University of America. He is also associated with the Witherspoon Institute, a strongly conservative research center in Princeton, New Jersey. But that’s another story, and does not in the least diminish the interest of this book.