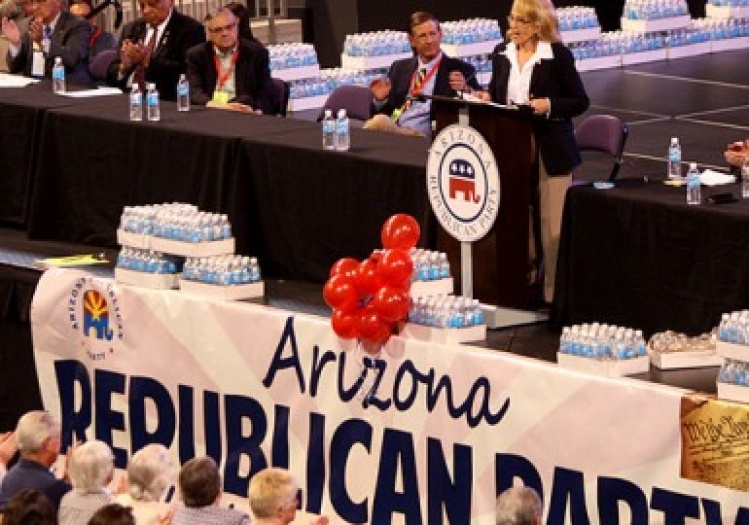 Social and religious conservatives should have been the first to oppose the Arizona Legislature's effort to allow businesses to discriminate against same-sex couples on religious grounds.
Partisans of the religious right apparently don't feel this way, but here's why they should: Pushing "conscience exemptions" beyond reasonable limits threatens a long-standing American habit of having government go out of its way to accommodate the commitments of religious people.
Conscience should not be used as a battering ram to undermine any adjustment in the law that some group doesn't like. Using conscience exemptions to facilitate backdoor resistance to social change takes something precious and turns it into a cheap political tactic.
That's why conservatives should be grateful that Arizona Republican Gov. Jan Brewer vetoed the anti-gay bill.
Those who cherish religious faith ought to be heartsick that it is so often invoked not to advance compassion and understanding but rather to justify discrimination and even bigotry. This is doing serious harm to our religious traditions, particularly among the young.
The millennials are more detached from organized religion than any earlier cohort of young Americans since polling began: Roughly one-third reject formal religious affiliation. Many scholars -- notably Robert Putnam and David Campbell, whose American Grace is the definitive book on the United States' religious landscape -- attribute this to the hyper-politicization of faith on the right.
To young adults, Campbell and Putnam wrote in a 2012 article in Foreign Affairs, "'religion' means 'Republican,' 'intolerant,' and 'homophobic.' Since those traits do not represent their views, they do not see themselves -- or wish to be seen by their peers -- as religious."
Congratulations to the Arizona Legislature for doing such an excellent job at de-evangelization.
But the promiscuous resort to conscience exemptions is a more immediate danger to religious groups. Religious accommodations in our laws reflect our devotion to liberty and pluralism. They involve an ongoing effort to balance robust protections for faith groups on the one hand with the need for laws of general application on the other. Destroying the equilibrium would undercut the search for accommodation.
For both pragmatic and principled reasons, supporters of marriage equality have already gone out of their way to respect the objections of many faiths to blessing homosexual unions.
In November 2012, Maryland's voters approved gay marriage by a majority of 52 percent to 48 percent. Key to this victory (and to victories elsewhere) was the willingness of marriage equality's supporters to acknowledge the freedom of religious institutions to run their own affairs.
The wording of Question 6, as it was known, thus included strong language noting that the law "protects clergy from having to perform any particular marriage ceremony in violation of their religious beliefs; affirms that each religious faith has exclusive control over its own theological doctrine regarding who may marry within that faith; and provides that religious organizations and certain related entities are not required to provide goods, services, or benefits to an individual related to the celebration or promotion of marriage in violation of their religious beliefs."
Short of defeating the referendum, what more could religious opponents of gay marriage ask for? It turns out: quite a lot. The sponsors of the Arizona legislation thought, for example, that religious florists, caterers and photographers should not have to work weddings they don't believe should be taking place.
Most Americans disagree with this. They make a sensible distinction between guarding the rights of religious groups and allowing wholesale discrimination against gays and lesbians in commerce.
A poll in July by Third Way, a policy organization reflecting the thinking of moderate Democrats, and the Human Rights Campaign, a leading gay rights group, found that while 61 percent of voters said that a clergy member or church should be able to refuse to perform a gay marriage ceremony, only 35 percent said a restaurateur should be able to refuse to cater a gay couple's wedding; 56 percent said he shouldn't.
A similar majority (59 percent) rejected the idea that a florist should be able to refuse to sell flowers for a gay couple's wedding, while 54 percent rejected a comparable right for photographers.
The public sees the difference between a church and a marketplace. Shouldn't this be good news for religious people?
Religious liberty is rooted in law but also in civility and in a constant effort to take account of the concerns of groups with profoundly different convictions. Intuitively, the American majority -- including large numbers of conservatives, Republicans and religious people -- knows that Arizona's bill upset this delicate balance.
(c) 2014, Washington Post Writers Group
Tags
Columnists
Domestic Affairs
Religious Life
LGBTQ issues
U.S. Catholicism