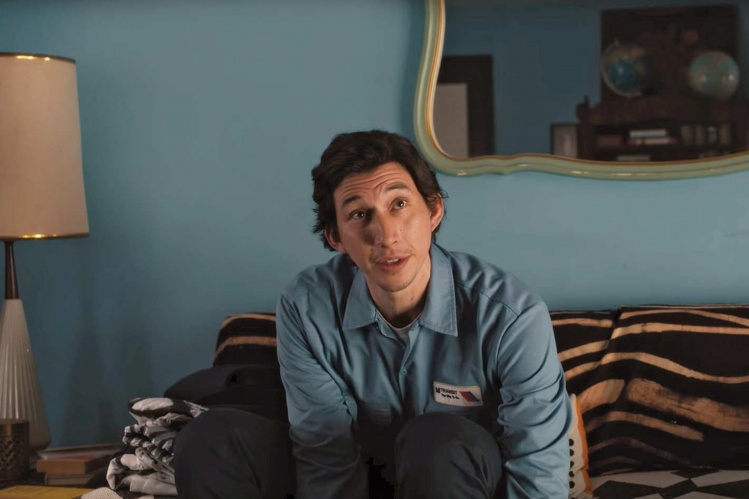 Recently I wrote of Manchester by the Sea that one “rarely comes across a film that captures the drift and flow of daily life and conveys its pungent poetry.” Yet, hard upon the release of Manchester comes Paterson, which not only captures that drift and flow but slows it down, dwelling in the doldrums that most films sail through. Here is a movie that embraces banality so pertinaciously that the ordinary becomes nearly mesmerizing. Manchester, after all, was about what happens when a crisis, the premature death of a beloved brother, interrupts daily life, but Paterson depicts a week in which nothing much happens to its hero, and shows us how his vocation actually depends on uneventfulness. When a small catastrophe finally strikes at the end of the week, a bit of mysticism out of key with the rest of the movie saves the day.

Paterson is the name of our hero, played by Adam Driver. It is also the name of the northern New Jersey city where he lives and works as a bus driver. Finally, Paterson is the title and setting of William Carlos Williams’s verse epic of the commonplace. Paterson himself writes poetry in his spare time. His poems, like those of Williams, that laureate of red wheelbarrows and white chickens, use spare language to turn the mundane into the memorable. The quotidian provides our bus-driving bard not only with his raw material but also with the steady emotional climate he needs in order to practice his art.

Paterson’s workday schedule is unvaried. He rises every morning at approximately the same time beside his attractive and effervescent Iranian-American wife Laura, eats the same breakfast (Cheerios), and walks through his grungy but friendly neighborhood to work. (It’s not incidental that he possesses neither cellphone nor car. He’s grounded in more ways than one.) At the bus depot Paterson takes over from a fellow driver who invariably complains about the same humdrum problems. Paterson drives all morning and afternoon, comes home to supper, chats with his wife, walks his English bulldog Marvin as far as the nearest bar, where he has a beer or two while interacting with the curmudgeonly owner Doc (Barry Shabaka Henley) and some regulars. And so to bed. It’s banality in excelsis.

But by spotting tiny anomalies within the banality, Paterson finds the subjects of his poetry, and by observing Paterson carefully, writer-director Jim Jarmusch achieves a peculiar, low-temperature cinematic poetry. The act of noticing is at the heart of both our hero’s art and the filmmaker’s method. When Paterson takes his place behind the wheel, he’s in an ideal place for observation; his seat perches him high above cars and pedestrians, and the front window has the shape, if not the size, of a cinemascope movie screen. The talented cinematographer Frederick Elmes’s camera becomes the gaze of our hero as he surveys the streets, sidewalks, and people, as well as all the establishments—bars, locksmith, post office, schools—that have somehow survived urban collapse. The visuals never sugarcoat faces or objects but discover the beauty within the grunge.

Paterson’s ears are as open as his eyes. As he drives, he hears two young male passengers talking about the sexual conquests they came close to the night before and inventing excuses for not following through, even though the ladies in question “wanted it, oh yeah, they were definitely hot for it.” Both we and Paterson can hear the sexual insecurity beneath the macho boasts, and this is underscored by a quick close-up of the scuffed shoes of these underachievers. Then, as a capper, a brief shot of a girl getting off the bus registers her scornful glance at the losers. We’re never treated to a Paterson poem about this incident, but we know it will make its way into one sooner or later.

Sometimes Paterson’s noticing leads to a certain disquiet. At home, he admires the frosting design that his wife, an aspiring pastry cook, has squiggled on her latest batch of cupcakes. Then he looks up and sees the same design on the curtains she’s sewn and the dresses she’s made. Laura is both multi-talented and scatterbrained (she dreams of being a country singer even though she has trouble learning the lyrics of “Old Macdonald”), but a certain innocent monomania is evident in everything she creates. If her husband is good at spotting variations within sameness, Laura, his complementary opposite, seems to see the same patterns in very different objects.

Why is this cinematic compendium of minutiae not boring? (Or at least not boring to those willing to get on its wavelength.) First, just as the lightning-fast editing and a thunderous soundtrack of an action movie jazzes you up and keeps you hungering for more and more violence, Jarmusch’s tempo, maintained through lengthy two-shots and conventional close-ups of people in quiet conversations, slows your metabolism down. Instead of hungering for action, you start responding to whatever Paterson notices, quirks of speech as well as visual anomalies—as when Doc’s wife storms into his bar and upbraids him for raiding the household money for a chess tournament’s entrance fee. “Tournament! You’re gonna need a tourniquet if you don’t put back that money!” In Paterson, anyone may turn out to be a poet.

The other way this film avoids tedium is by showing us that, though its protagonist is a strictly no-drama guy (and Adam Driver, a master of droll detachment, has never been cast to better effect), there is drama happening all around him. Throughout the movie Paterson observes the ongoing deterioration of a love affair between two bar regulars—the bombastically romantic actor Everett and the attractive, restless Marie. This conflict keeps mounting until it seems ready to explode into violence; instead, it ends in anticlimactic farce. There’s also a struggling rapper who turns a laundromat into a rehearsal room, some menacing gangbangers who just might have dognapping intentions toward Marvin, and a little girl who entrances our hero with her own talent for poetry. (Her poem is by Jarmusch himself, while Paterson’s poems were written by the poet Ron Padgett.)

Paterson never strays into melodrama. I suspect its detractors would say that it also never ascends into drama. Though I love high drama and low melodrama and can’t get enough of Shakespeare and James Bond and Italian opera, I found this blissed-out sloth of a movie to be an admirably eccentric experience.