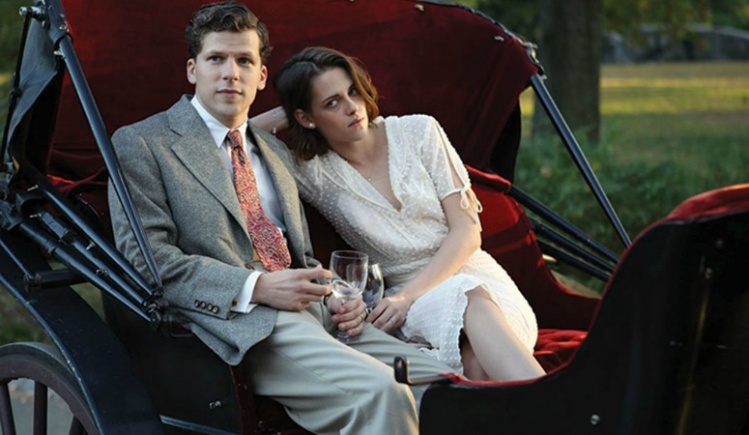 Café Society’s plot is a repository for all the familiar Woody Allen themes. In 1935 a young Jewish naïf, Bobby Dorfman (Jesse Eisenberg), leaves his endlessly squabbling New York family (theme: the warmth and abrasiveness of the Jewish nest) to see if his Uncle Phil (Steve Carrell), a successful agent, can find him employment in Hollywood. A low-level job materializes and so does Phil’s beautiful, dewy secretary (Kristen Stewart), whom Bobby courts without realizing she’s his uncle’s mistress (theme: impoverished innocence romantically vying with worldly, cynical success). Rejected by the girl (theme: the incomprehensible sexual decisions of desirable women), Bobby returns to New York for employment in his gangster brother’s nightclub, Café Society, which he successfully manages after his brother is convicted of murder. On death row, the brother converts to Christianity only because it promises an afterlife with a certainty absent from Judaism (theme: the cowardice and irrationalism of religion, especially Christianity). After the execution, business at the nightclub takes off because high society is titillated by the fact that it was founded by a murderer. Bobby becomes rich (theme: malevolent fate sometimes cuts us a break). After marrying a socialite, our hero reunites briefly with his former love when she, now married to Phil, visits Manhattan, but there’s no true rekindling of the flame (theme: even when life gives us moderate contentment, we remain the playthings of fate).

Bobby is a Candide, an innocent caroming off one worldly corruption after another, but whereas Voltaire entertains us by showing that his hero’s character is being tempered (if not deflowered) by his misadventures, there’s no suspense attending Bobby since his innocence projects itself as colorless, undentable amiability. As a lover, he’s never passionate. As a rival, he never really collides with Phil. Perhaps Allen’s point is Yeatsian—“The best lack all conviction, while the worst / Are full of passionate intensity”—but if so, he fails to dramatize it here. (Compare his gripping fulfillment of the same theme in Crimes and Misdemeanors.) And while Voltaire surrounds his naïf with fascinating scoundrels, Allen barely sketches in Bobby’s antagonists, though Steve Carrell does manage to suggest the mental anguish beneath Phil’s hustling glibness. Jesse Eisenberg’s performance, composed as it is of half-smiles, half-shrugs, and half-winces, is no better than half a characterization.

Movies with superficial characters aren’t necessarily bad as long as their plots are both surprising and consistent—even consistently absurd, as with the best screwball comedies. But we can guess all too easily where Café Society is heading at every point. Let the Dorfmans acquire a loudmouth, aggressive neighbor and we know that the gangster son will dispose of him. Let the girl gift her older lover with a signed photo of Valentino and we foresee that this will become a significant plot point. Allen’s early films were chaotically plotted, but who cared as long as the dialog crackled with snark and wit? Now that his scripts aspire to be classically well-constructed, his dialogue has become as stilted as the stuff heard on afternoon soap operas. The younger Allen would never have one character tell another “I love you” and have the other reply, “My heart beats faster when you say that.” Unless, that is, he was about to follow it with a wisecrack.

Yet for all its narrative neatness, the characterizations are often inconsistent. In an early scene, Bobby is portrayed as so ethnically sensitive that he refuses to have sex with a novice prostitute he’s hired when she turns out to be Jewish. Yet later he encounters a Waspy society dame who reels off a long list of Jewish stereotypes (miserliness, political subversion, etc.) that she totally accepts. So he marries her! What’s going on here?

Allen’s direction occasionally reverts to its former inventiveness. (When Bobby pays the aforementioned prostitute to go away, she dithers and blithers at his rejection but also carefully counts the cash.) And the great cinematographer, Vittorio Storaro (The Last Emperor, Apocalypse Now) dips all his director’s labored angst into a salmon-pink loveliness. But something seems blocked. In the work of some elderly artists—the late masterpieces of Verdi, Ibsen, Luis Buñuel, Stravinsky—we encounter a serenity, a clarity, even a playfulness that bespeak an unsurrendered zest for life. But Allen’s last few films (even the overrated Midnight in Paris) seem to come from a man who wants to push the messiness, annoyances, and even the surprises of life as far away from him as possible. Perhaps Allen would like to become a hermit?

The life and artistic misadventures of Florence Foster Jenkins, generally considered to be the worst singer ever to perform in public, present an ambiguous gift to filmmakers. Upon first hearing her voice (one CD recording is titled “Murder on the High Cs”), you might assume she was a musical comedian in the manner of Anna Russell or Victor Borge. But once you know something about her life—that she was given syphilis by her first husband, was a competent pianist until an illness destroyed her digital coordination, contributed generously to the New York arts scene (which supplied the small audiences for her private recitals), was shielded from ridicule by her second husband and unofficial manager, and was so devastated by the laughter and bad reviews greeting her first and last public performance (at Carnegie Hall!) that she suffered a heart attack and died a month later—you may well wonder if this is the stuff of farce, satire, or tragedy.

For their biopic, scriptwriter Nicholas Martin and director Stephen Frears have found the perfect solution: they simply sound all the registers of Florence’s story from high to low, from the ridiculous to the sublime. The result is a comedy that makes room for pain, pathos, quiet lyricism, and even a touch of slapstick. Like so much of Frears’s work, Florence Foster Jenkins radiates generosity. You laugh at the lady’s voice but never at her.

Performing artists used to say of a moment of inspiration, “the god descends.” When you look at Meryl Streep’s face as she launches into an aria and proceeds to slaughter it, you can see that a god has indeed descended, but he’s a mischievous god who has flooded his human vessel with a profound love of music and mercifully deafened her to the dog-like yippings her vocal cords produce. Streep makes it clear that Florence isn’t merely a victim of sycophantic flattery, but also a blissful dweller in the parallel universe inside her head. When a bad review finally breaks through the defenses erected by her husband, she is devastated—not like a self-deceiver undeceived but like an Eve who suddenly finds the gates of Paradise shut and locked behind her, and doesn’t understand why the angel on guard keeps insisting there was actually nothing behind those gates in the first place.

Without the help of heavy make-up, Hugh Grant gives us a character as fully realized as Streep’s. Gone are his patented stammering and blinking, and with them goes the gaucherie out of which he once got such comic mileage. His St. Clair Bayfield, failed actor and con man though he once was (and still is, in some respects), is also a knight guarding his lady’s fantasies. It’s pretty clear that Bayfield attached himself to Florence for her dough, but Grant certifies the script’s insistence that, somewhere along the line, he grew to love her. The most poignant sign of this is that when St. Clair, emceeing an arts benefit, performs a Hamlet soliloquy, he tears it to tatters as atrociously as Florence does her arias, but in the privacy of their bedroom, to lull her to sleep, he recites one of Shakespeare’s sonnets beautifully. This is an honorable gigolo and a diligent caretaker.

Sometime during the writing and filming of this big-hearted and emotionally versatile movie, a god descended.