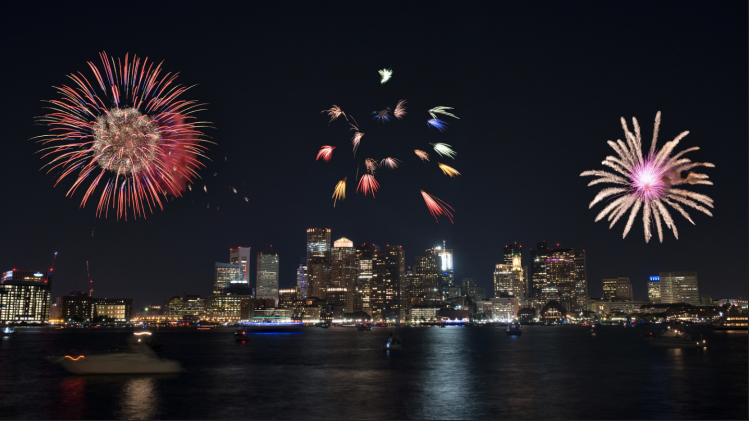 For perhaps ten years, on the evening before every Fourth of July, there were fireworks over Boston Harbor synchronized with Handel’s “Royal Hymn to Fireworks.” When this piece was first composed to celebrate the peace treaty that put an end to the War of the Austrian Succession, the fireworks were just the background for the music. In Boston, they were the main event.

I always had a front-row seat. At the time I was working the second shift (3 to 11 p.m.) at the New England Aquarium, on a barge where the sea lions and dolphins were lodged. The band played on a patio alongside the aquarium barge, while the fireworks barge sat in the harbor just behind the aquarium. It doesn’t get much better than that.

The whole spectacle was breathtakingly beautiful. The fireworks were perfectly in sync with the music. Smoke would linger with a sustained note. Small, discreet, but extremely graceful fireworks represented the softer, slower parts. The crescendos swept you up with them. Once, as I watched and listened, it occurred to me that this was perhaps the most beautiful manmade spectacle I had ever seen.

The fireworks ascend in various displays of glory and then silently descend as wisps of smoke, symbols of grace.
sharetweet

It didn’t last. People didn’t appreciate it—though maybe if they had had my seat they would have. The aquarium barge had a function room on the top deck, and the week before the Fourth the band would come aboard to practice there. I happened to be passing by when one of the rehearsals was breaking up and noticed a woman who had a piccolo in her hand and seemed rather lost. I thought maybe I could cheer her up by telling her how wonderful I thought the show was, and how grateful I was that she was helping to make it happen. She replied, a little sadly, that she wasn’t able to see the fireworks because everyone in the orchestra had their backs to the harbor. And, anyway, her whole attention was focused on not making any big mistakes in her piccolo part.

For some reason, that reply impressed me deeply. Aren’t most of us in a similar situation? We are locked up in our own little worlds, trying not to get hurt too much or screw things up too badly, and we have our backs to the fireworks going on all around us, to all the activity of the saints, the whole household of God, with the angels and the patriarchs, the prophets and the martyrs, the virgins and apostles—the festal gathering of all those who’ve accepted the Divine Mercy, who have buried the dead, fed the hungry, and wiped the tears of the sorrowful. The fireworks ascend in various displays of glory and then silently descend as wisps of smoke, symbols of grace. It’s like Jacob’s dream of the ladder between heaven and earth and God’s messengers continually descending and ascending. And there is the mysterious presence of all those whom we have known and loved, who have made us what we are, with whom we’re linked forever.

I wish I had thought of this in time to tell the piccolo player, whose name I never knew and whom I never saw again. But, as so often happens with me, I thought of what I should have said too late. I should also have told her that, even though she couldn’t see what was going on around her, her piccolo role was very important: without it, something would have been lacking in the spectacle. We must play our part without (yet) knowing its whole significance.