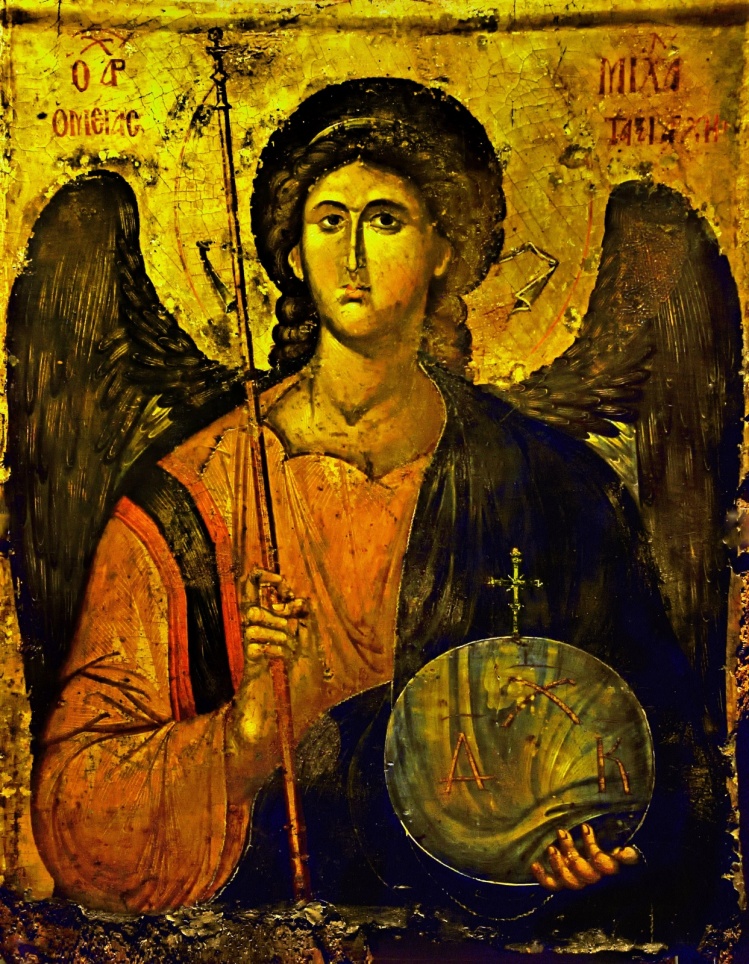 Today is traditionally celebrated in the liturgical calendar as “Michaelmas,” which literally means “Michael’s Mass,” in honor of St. Michael the Archangel. It was a special day during my Philadelphia boyhood because September 29 was also my mother Rose’s birthday—and she strongly identified with the fighting spirit of her “birthday saint.” The fact that the rosary typically ended with a series of devotions that included the Prayer to St. Michael the Archangel—typically, the concluding prayer—was an additional source of satisfaction to her. She had been a member of the Rosary Society of Ireland since her girlhood in County Donegal. Best of all, the prayer was recited throughout the world at the end of every low Mass (with a few exceptions, such as funeral Masses). “St. Michael the Archangel, defend us in battle”—just the right prayer for embattled Irish Catholic immigrants facing an alien culture.

So my mother found it very disquieting when this prayer received what struck her as an official demotion in the mid-1960s. The prayer was not said at the end of the new Mass, and St. Michael himself now had to share his feast day with his fellow archangels, Gabriel and Raphael. Instead of reasoning that she had acquired another pair of special guardians—no ordinary saints, either, but two archangels—my mother felt all this as a loss.

It was March 1965. We third graders, along with the rest of the pupils at St. Martin of Tours School, were practicing the “new rite” that would take effect that month, when the Latin Mass would be replaced by the vernacular. The “senior” altar boys had been memorizing the new rite for months. Fr. McSherry, the drill sergeant of a parish priest in charge of training the altar boys expected to know all the prayers by heart. It was generally agreed that it was much easier than Latin, but I remember that some older boys felt that once you had actually learned to rattle off the Latin (neither comprehension nor pronunciation were priorities for Fr. McSherry), the worst was over. So why put in more effort to relearn everything in English?

Of course, none of that was my mother’s chief concern. Like most parishioners at St. Martin of Tours, she welcomed the introduction of the vernacular. (As did our relatives back in Ireland. There, the option to celebrate Mass in Irish Gaelic was widely regarded as greatly honoring the Celtic language, which had been disrespected, marginalized, and almost stamped out by the English before Irish independence just four decades earlier.) But it came as an abrupt shock to my mother when, at end of Mass that March, there were no longer any concluding devotions—not even the Prayer to St. Michael. Although the changes had been announced the previous November, this particular change was just one of many and remained rather abstract until it took effect.

It was not the same in every Catholic church. The prayer continued to have a kind of shadowy afterlife in some dioceses, at least on some occasions, until 1970, when the new rite was finalized. As I say, I remember the rough outlines of all this because St. Michael the Archangel—the fearless protector of the Church and guardian of souls, the “Prince of the Heavenly Host”—was my mother’s patron saint, even more important to her than her “name” saint, Rose of Lima. She regarded his prayer as an adjunct of sorts to the Guardian Angel prayer. She seemed to believe that St. Michael the Archangel was in charge of all the guardian angels. Cherubim and seraphim might have their decorative place at High Mass, but they were not to be invoked when the chips were down and temptation was at the door. Her position seemed to be that Michael was in fact the greatest of all the angels, since after all he was the general of God’s militia, the commander of “the heavenly host” against “Satan and all the evil spirits who prowl through the world seeking the ruin of souls.” Your guardian angel was your workaday advocate, there to handle quotidian challenges and concerns. But your champion and intercessor against the powers of darkness was St. Michael. Your guardian angel understood all this, of course—and he would contact St. Michael before anyone else. Still, it was good to be in touch with him yourself and pray to him directly for protection against the evil spirits.

No doubt the St. Michael prayer rang a bit too “Church Militant” in my ears during the late sixties, with my G.I. Joe toy soldier years long behind me and the Vietnam War protesters on the march.
sharetweet

I later discovered that my mother got a few details wrong. True, Michael is an archangel—from the Greek arche (prince) and angelos (angel)—but he is also a princely seraph. But her overall view was correct: Michael (“He who resembles God”) is the supreme commander of God’s celestial army; he alone is actually called an “archangel” in the Bible. I don’t think my mother ever heard of C. S. Lewis, but she would have agreed with Screwtape’s observation that humankind’s first great error is to deny the existence of devils like himself. Yes, the enemy was very real and very present, so you needed to stay alert. The Irish Church fathers (and those pub regulars who toasted them) had it right: “May you be in heaven a half hour before the devil knows you’re dead.”

No doctors of the Church were cited by my mother to bolster these doctrinal teachings. I soon went through a phase of adolescent skepticism about my mother’s doctrinal soundness. No doubt the St. Michael prayer rang a bit too “Church Militant” in my ears during the late sixties, with my G.I. Joe toy soldier years long behind me and the Vietnam War protesters on the march. Yet even before my altar-boy days were fully over, I came to see that her basic catechetical instruction to invoke St. Michael as our intercessor had a theological foundation.

The very origins of the St. Michael prayer attest to that, for it was none other than St. Pope Leo XIII who, after a vision in 1884 in which he heard Satan boasting to God that he could destroy the Church “in seventy-five to a hundred years,” composed the prayer to the archangel, begging him to safeguard the Church. It was this prayer (considerably shortened) that—by a 1886 mandate of Pope Leo—came to be prayed at the conclusion of every low Mass until the reformed rite introduced after Vatican II.

My mother would be heartened to know that four years ago today—on what would have been her ninetieth birthday—Pope Francis appealed to all Catholics to include the St. Michael’s prayer at the end of every rosary. He said that, because the Church is rent by internal divisions and besieged by new revelations of abuse, it needs St. Michael and his prayer more than ever. Francis stressed the direness of this need in personal terms. “Not a day goes by that I do not, each morning, beseech his protection in our battle against the Great Accuser.”

My mother would be delighted this posthumous birthday gift: to hear that her own daily “go-to prayer” put her in good company with the Holy Father. She would have been gratified to know that her patron saint is once again being called upon, in a new century, to safeguard God’s Church and His children. Reading the pope’s message, I felt that I could hear her voice of long ago, guiding me and my brother at bedtime in the St. Michael’s prayer: St. Michael the Archangel, defend us in battle. Be our protection against the wickedness and snares of the Devil. May God rebuke him, we humbly pray, and do thou, O Prince of the Heavenly hosts, by the power of God, cast into Hell Satan, and all the evil spirits who prowl about the world, seeking the ruin of souls. Amen.