Women, Men, and The Diaconate 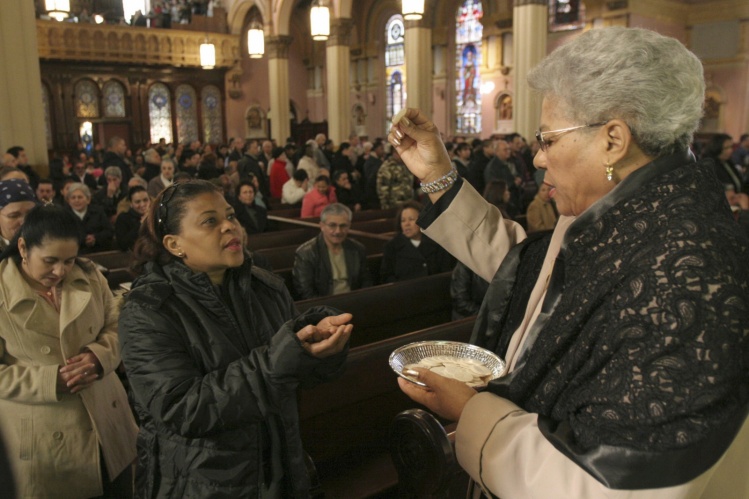 An extraordinary minister of the holy Eucharist distributes Communion during Mass at Transfiguration Church in Brooklyn (CNS photo/Gregory A. Shemitz)

At a recent symposium on “The Future of Women Deacons” held at Fordham University, Fr. Bernard Pottier, SJ, made a comment that I found particularly refreshing. He said that when men and women work together in the church it enriches the ministry of both. He said it is not a question of complementarity—“you can do something I can’t do, and I can do something you can’t do.” Rather, the collaboration of women and men creates “a sort of promotion, a dialectical promotion” in which both (male and female) become more fully themselves through their interaction with the other. “I am more a man when I work with women” he said.

He ought to know. In addition to his scholarly research in patristics at the Institut d’Études Théologiques in Brussels, where he teaches, and his service to the universal church as a member of the International Theological Commission, he is also a psychologist who has been in practice with a female colleague for the past fifteen years.

It is perhaps the first time I have heard it proposed in a Catholic setting that women and men have a beneficial effect on one another that is neither confined to the marital relationship nor rooted in biological function. The thought of John Paul II, which has dominated papal teaching on the subject of the sexes, relies heavily on the idea of complementarity. In his “theology of the body,” he draws a straight line from biological differences between men and women to their distinct social roles and even their very being.

“Complementarity” expresses a conviction that many people share: “men and women are different” and this difference is a good thing, a manifestation of the order of creation that must be respected. But what frequently happens in Catholic discussions is that those “differences,” whether real or imagined, end up being defined in such a way that traditional sex roles are reinforced: in order to “protect” woman’s “essential nature” she has to be kept “feminine”—mostly by being celebrated in the domestic sphere.

If history has taught us anything about the relations between the sexes, it is certainly that they are not fixed and immutable.
sharetweet

Pope Pius XII gave us a classic example of this train of thought in 1945: “A woman’s function, a woman’s way, a woman’s natural bent, is motherhood. Every woman is called to be a mother, mother in the physical sense, or mother in a sense more spiritual and more exalted, yet real none the less. To this end the Creator has fashioned the whole of woman’s nature: not only her organism, but also and still more her spirit, and most of all her exquisite sensibility.” According to this way of thinking, things like decision-making, leadership, and action in the public realm are not “natural” to women; to pursue them would be a distortion of nature.

Although John Paul II’s anthropology was more nuanced than that of Pius, he held a view of sexual roles that some scholars have called “classicist”—that is, he believed that the differences between the sexes are essential, universal, and not subject to change. Alas, it seems that, underneath his affirmations of female dignity, John Paul really did want to “keep women in their place.” Mary McAleese recalls that when she, as president of Ireland, met Pope John Paul II, he refused to shake her hand. Instead he shook her husband’s hand, saying “Would you not prefer to be the president of Ireland rather than your wife?”

Pottier’s interesting suggestion about “dialectical promotion” on the other hand—one I hope he develops further—seems, fortunately, to have very little “pre-determined outcome” about it. In this respect, his approach has more in common with the thought of Pope Francis. Although it is true that Francis has continued to use the language of complementarity, he sees male-female complementarity as an evolving reality that takes a great variety of forms and grows in freedom through the gifts of the Spirit. “When we speak of complementarity between man and woman,” he said at a colloquium on marriage in 2014, “let us not confuse that term with the simplistic idea that all the roles and relations of the two sexes are fixed in a single, static pattern.”

If history has taught us anything about the relations between the sexes, it is certainly that they are not fixed and immutable. In the post-industrialized world, professional men and women are more likely to work together than in single-sex institutions. This has not been true in all times and places. Could women and men work together in the diaconate? For societies like the present-day United States this is a no-brainer. Of course they can. If the idea of “dialectical promotion” is correct, they will be more themselves rather than less.