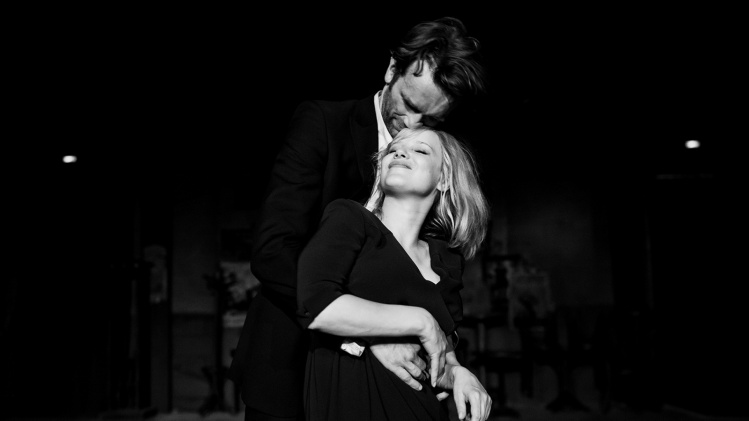 If every tragedy ends in death and every comedy in marriage, then technically speaking Pawel Pawlikowski’s Cold War might have to be considered the latter. As the film’s tumultuous, multi-decade, continent-spanning love story nears its conclusion, Wiktor (the stoic Tomasz Kot) and Zula (the beautifully wounded Joanna Kulig) do indeed find themselves kneeling together before an altar. But this ersatz wedding—lonesome, silent, held in the ruins of a country church—suggests something rather more tragic. After passing through decades of calamity, often collaborating in each other’s misery, these lovers seem to settle for life together amid the rubble.

To begin at the beginning: It’s 1949, in rural Poland, and Wiktor Waski is a musician and conductor tasked with organizing a national folk-music ensemble. In the wake of the Second World War, the Soviet-allied Communist government in Warsaw sees this patriotic undertaking as a useful propaganda vehicle, and it gets fast-tracked.

Zula, a reckless youth running from a troubled past, arrives as a hopeful in Wiktor’s talent search, in a sort of postwar Polish version of American Idol. Stumbling through her audition, she nevertheless captivates him. He takes her under his wing, and, soon enough, the two become lovers. But when Zula fails to follow through on the couple’s plan to escape across the Iron Curtain, they take new lovers and make new compromises to survive. They try to put their passion behind them, but never stop orbiting each other. As Zula criss-crosses Europe, first as a touring musician and then as a half-hearted defector, they keep colliding in dim, smoky corners of the divided continent for brief snatches of passionate, if stormy, reunion.

It’s a plot that the director of 2013’s Academy Award-winning Ida has had on his mind for a while. Pawlikowski calls it “the matrix of all love stories”; it is also, with some details swapped, the story of his parents. As with Ida, his newest film uses a palette of greys and a square aspect ratio to evoke the atmosphere of 1950s Poland, a society still emerging from total war and caught in the vise of the geopolitical struggle between East and West.

Betrayal also propels the plot, perhaps unsurprising for a film that examines the treacheries of both love and Communism.
sharetweet

Cold War, however, is distinguished most of all by its disjointed narration, which skips across years and borders in great leaps, distilling life into a handful of pivotal moments. Paired with cinematographer Lukasz Zal’s precise eye—which moves from epic sweeps of Poland’s vast, snowy plains to the intimacy of a Paris nightclub—this episodic storytelling mimics the working of memory itself, which coalesces our messy, mostly unremarkable lives into vivid flashes, given retrospective import by our future selves.

Betrayal also propels the plot, perhaps unsurprising for a film that examines the treacheries of both love and Communism. The lovers’ ordinary deceits mingle with the machinations of state and the corrosive suspicion of life under the Party, muddling together into a general atmosphere of distrust. In one blissful, bucolic scene, Zula confesses to Wiktor that she has been informing on him. She was given no choice, she insists. Moreover, she has also been misleading her Party minders to protect him. Has she—or is this another deception? “Do you believe in God?” she abruptly asks. “Because I do.” Is this true vulnerability, or is she falsely baiting Wiktor into what, in a confessionally atheist state, would be a damning admission?

Such uncertainty is emblematic of the overall tone of a film that holds sentimental romance at an ironic distance. In one scene, a poet at a Parisian party waxes cryptically about “a pendulum [that] kills time,” spouting that “time doesn’t matter when you’re in love.” The pendulum is indeed an apt metaphor for Wiktor and Zula, who themselves swing back and forth across borders, alternating continually between absence and presence, distance and communion. These dichotomies are mirrored in their personalities, the lanky, solemn composer and the impetuous, cunning young singer. They are mirrored, too, in Pawlikowksi’s talent for juxtaposing visual and acoustic extremes, with scenes of serene contemplation set against bursts of spinning motion and lush musicality.

Love here certainly isn’t a teenage fairy tale, but neither does the film fall into weary cynicism. It presents love, rather, as tenacious accompaniment: the couple betray, fail, and wound—but never abandon—each other. They suffer with, for, and through each other. Their pendulum does not do away with time, as in the poet’s naive telling, but instead marks it and renders the past irrevocable, though not irredeemable. With every narrative leap the effect of the intervening years intensifies: their aging faces adopt and discard hairstyles, absorb years of smoke and stress, accumulate sorrow. Yet it is a cyclical, almost ritual participation in time: the way they careen between separation and reunion comes to take on the regular (if not always predictable) cadence of a heartbeat.

Here, at least, there is a certain residue of Pawlikowski’s Catholic upbringing in Poland, where popular piety persisted in spite of the Communist government. The church is almost totally absent from the story, except for one crucial detail—it both begins and ends in the same crumbling sanctuary, its collapsed nave open to the sky and its ruined fresco icon glaring out from the wall. Framed by this pair of shots, the film adds another layer of irony, suggesting that its characters, despite their secularism and bohemian eroticism, are ultimately unable to escape the influence of their inherited religion. The repetition of folk melodies and lyrics that knit the far-flung episodes together heightens this sensation, grounding the characters in their past even as it propels them into the future.

Wiktor and Zula’s vows, in that final scene, are more desperate than valid. There is no priest, no witnesses, no bread and wine. Who knows what will come after; they exit the church exhausted and broken people. But in the shelled-out church of that shattered country there remains at least the glowing ember of their original love.

J.E. McBride is a writer and editor based in New York City