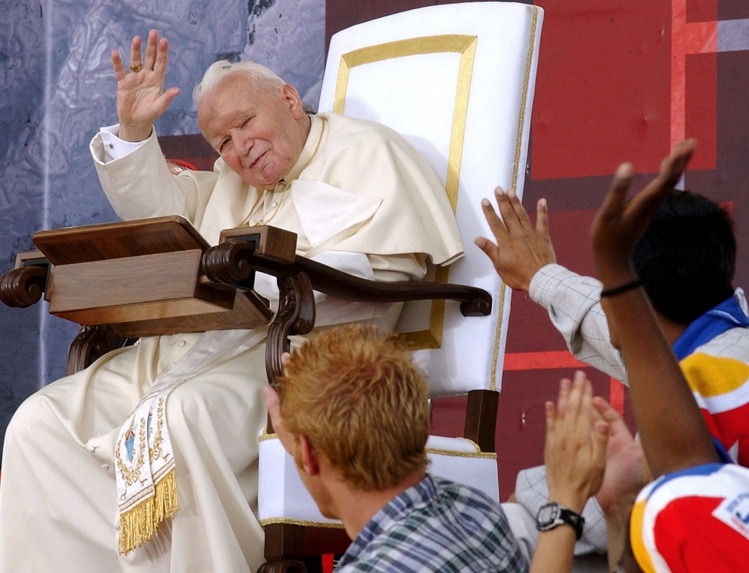 In the wake of the killing of George Floyd, public protests across the United States and around the world have focused on racism, calling for a reckoning not only with his death but also with systemic injustice. There is a sense of déjà vu in what happened. Many recalled the death of Eric Garner or the beating of Rodney King and the outrage and protests these provoked, or remembered the upheavals of the 1960s. It’s not just about policing. A litany of offenses against Black people in America extends across history: from slavery to lynching and other murders; from redlining and Jim Crow to contempt and exclusion from the goods of society. After George Floyd’s death, anger has boiled over again. Will anything change?

This moment in time is perhaps a good one to revisit John Paul II’s teaching on social sin, both for the hope it inspires and for its frank acknowledgement of the challenges we face. To tell this story we need to start in the 1980s. The theme of the 1983 Synod of Bishops was “reconciliation,” and John Paul II wanted to talk about penance. However, the bishops—in particular the bishops from Third-World countries—had something else on their minds. They wanted to talk about social sin, structures of sin, and systemic forms of oppression that magnify and perpetuate sinful situations. Reconciliation is not only a matter of confessing personal faults and seeking forgiveness; conversion requires commitment to social change.

Ever the anti-Marxist, John Paul II resisted speaking about sin in supra-personal terms. Rather than leaning into the problem of structures, he instead turned to the theme of personal responsibility. He blunted the force of the concept of social sin by claiming that every sin is, in a certain way, social. A staunch defender of the practice of individual confession as essential to the sacrament of penance, he also effectively suppressed the communal rite of reconciliation with general absolution—one of the few reforms of the sacrament after Vatican II that was growing in popularity. One might conclude therefore that John Paul II successfully routed those who sought to develop the Church’s teaching on reconciliation to include social sin and communal responsibility.

To John Paul II, structures of evil are formidable expressions of the “mystery of sin”
sharetweet

But that was not the final outcome of the discussion. Pressed to explain what the bishops were talking about in the synod, John Paul II actually put social sin on the map for many Catholics in his post-synodal exhortation, Reconciliation and Penance. He defined social sin as “the accumulation of personal sins.” He acknowledged the existence of structures of sin—a subject to which he would return in later teachings—even as he insisted on personal responsibility. To John Paul II, structures of evil are formidable expressions of the “mystery of sin,” to which our faith provides a definitive and liberating response.

In that exhortation he identified seven ways that people contribute to social sin—behaviors we see in many instances, from racism to abortion, from ecological degradation to sexual abuse. The first is to cause evil, the second to exploit it. Thus the sweatshop owner harms his workers, and those who make a profit by selling the cheap goods he produces exploit the availability of these goods. The third names “those who are in a position to avoid, eliminate or at least limit certain social evils but who fail to do so out of laziness, fear or the conspiracy of silence.” Think of the onlookers who did nothing to stop the killing of George Floyd, or the “blue wall of silence” that has cloaked lethal violence against Blacks. The fourth consists of secret complicity. One does not need to march in the streets chanting “Jews will not replace us” to traffic in conspiracy theories and support a politics of division. The fifth is indifference, captured so well by the logo on a jacket worn by Melania Trump when she traveled to the southern border during the height of the family-separation crisis: “I really don’t care, do u?” The sixth names “those who take refuge in the supposed impossibility of changing the world,” turning cynicism into a comfort zone. The seventh identifies “those who sidestep the effort and sacrifice required, producing specious reasons of higher order.” One has only to recall the way Mark Zuckerberg invoked free speech when confronted with Facebook’s role in spreading misinformation to see an example. John Paul II was attempting to show that social sin is perpetuated by human acts. An awareness of social sin, for John Paul II, summons each of us to invest personally in the work of dismantling structures of sin in order to build a civilization of love.

One of the key characteristics of social sin is that it projects its own inevitability. There seems to be no way out. But the positive side of the teaching on social sin articulated by John Paul II is that there is a way out: solidarity. Solidarity, as he explained in 1987, “is not a feeling of vague compassion or shallow distress at the misfortunes of so many people, both near and far. On the contrary, it is a firm and persevering determination to commit oneself to the common good; that is to say to the good of all and of each individual, because we are all really responsible for all.”

Individuals often feel powerless to change situations that give rise to ongoing societal evil. Yet we should never lose heart. John Paul II’s teaching reminds us that we can do something constructive together; we are not mere playthings of history, condemned to perpetual roles of oppressor and oppressed. As he argued in 1999, “Evil exerts a frightening power of attraction which causes many types of behavior to be judged ‘normal’ and ‘inevitable’.... So many people feel powerless and bewildered before an overwhelming situation from which there seems no escape. But the proclamation of Christ’s victory over evil gives us the certainty that even the strongest structures of evil can be overcome and replaced by ‘structures of good.’”