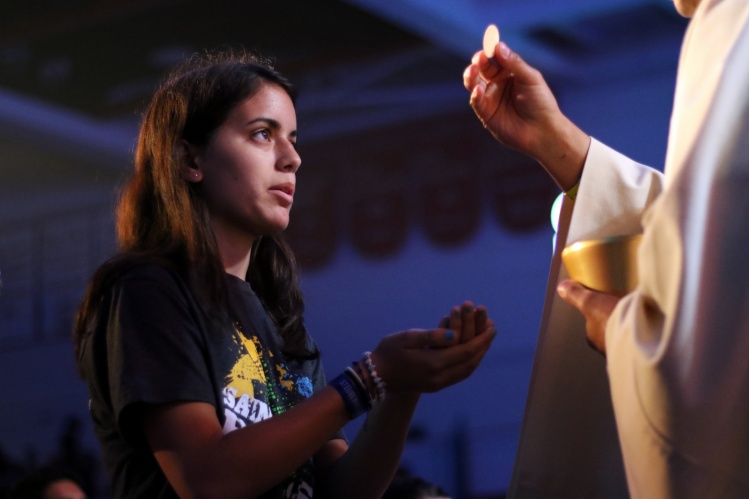 It was somewhere in the process of explaining transubstantiation to my skeptical seven-year-old that I taught her the phrase “Go big or go home.”

I hadn’t intended to bring up transubstantiation, or religion, or anything at all—we were just trying to make it through a rare sit-down post-church brunch (we usually do more of a perching coffee and pastries), helping the two-year-old balance scrambled eggs on her spoon, when my older kid asked, pretty much out of nowhere, “The cracker and the wine…they’re not really the body and the blood of Jesus, right?”

Even though my husband attended Catholic school for five years and has sat through more theology classes than I have, I’m the actual Catholic, so I was fielding this one.

I grabbed the moment as best I could to explain that yes, well, actually, the craziness of that idea was the point. The whole idea that something could literally transform before our eyes. That we could, daily if we wanted to, eat the body and drink the blood of a two-thousand-year-old man, alongside a billion other people across the globe. She raised her magnificent eyebrows. “Okaaaaaay.”

And, I should explain—we don’t do a lot of imaginary-type stuff in our household. I know moms who carefully write notes in glitter pens from fairies that they leave in tiny backyard fairy houses. I know moms who do Elf on the Shelf. The children of these moms, I should add, are delighted by this stuff. It’s delightful. But it’s not really me.

In our house—on the theory that there are only so many times you can convince your kid that a bearded man in the sky is watching and evaluating his or her moral choices—I downplay Santa Claus into a perfunctory nothingness. When I suggested to my daughter that she might want to put her fallen tooth under a pillow for the Tooth Fairy, she did some quick mental math and decided it was worth a dollar per tooth to hold on to her former body parts in a little plastic jar, thank you very much.

So, I didn’t have, let’s say, a large arsenal of semi-magical things to draw upon when trying to explain the whole body-and-blood thing. We’re not whimsical, really. Just religious.

Which is why I landed on the phrase “Go big or go home.” It means, I explained, when you decide to do something because it’s enormous. Because it’s crazy. Because it doesn’t really make sense. That’s how you know you believe.

And, look, I explained to her, lots of people think that the bread and the wine or the cracker and the grape juice are metaphors. That they stand in for the idea of Jesus sacrificing himself. And, honestly, that makes a ton more sense and it is way easier to wrap your head around.

But for me, well, I’m not getting up on a Sunday morning and wrestling two kids into Mary Janes before nine o’clock for a metaphor. The enormity, the impossibility of the idea, is the whole freaking point.

There are things I get out of the Catholic Church that I don’t get anywhere else. And a lot of them also come from the bigness.
sharetweet

The bigness means wealth and power, the exact traits of this world that Jesus seems so clearly to warn against. The bigness means vanity. It means pride. Which means we’re now clearly facing destruction and fall.

But for me, there are things I get out of the Catholic Church that I don’t get anywhere else. And a lot of them also come from the bigness. A diversity in my parish that looks like the diversity of Los Angeles (and not the diversity of your average writers’ room). A heft that can be mustered on behalf of the vulnerable. A community that stretches all over the globe, which means that wherever I travel, I can—more or less—follow along when I go to Mass. A longevity that matters to me these days, maybe more than it ever has before. America is feeling extremely young right now. Democracy is feeling extra fragile.

Things about this country that I thought were pillars are turning out to have been more like Tinkertoys in drag. I feel wobbly. I want something old. I want heft and ritual and inevitability. I want the chance to punch myself in the chest and say sorry and mean it. When I think about climate change (and I think a lot about climate change), the only way I can imagine getting through it would require such a massive disruption to our established systems of power that I can’t see it happening without a miracle. I want miracles.

When the Leadership Conference of Women Religious was being investigated, back in 2012, I pulled back from the church for the first time in my adult life. Between that and the Fortnight for Freedom, I felt alienated from the church as a woman. I felt ignored and unseen and unappreciated. I saw the work that women (both lay and religious) did to keep the church running every day and I couldn’t believe that we were the ones being lectured. I stopped going to church. But I missed it. A lot. I emailed priests for advice. I read a book about Ignatian spirituality. But it wasn’t the same.

Finally, one Sunday, I went to an Episcopal church in the neighborhood I lived in then. It was, it should have been, perfect for me. Small, modest, housing a refugee- and immigration-services organization on site. So, I gave it a shot. And, after a lovely service by a lovely female priest, I went on a walk with my husband and collapsed in tears. It wasn’t the same. Something wasn’t the same. Communion wasn’t the same. I missed my church. Flawed and beautiful and impossible and massive.

I can’t tell you rationally why I went back. It doesn’t make sense. All I can say is that I went big—and came home.